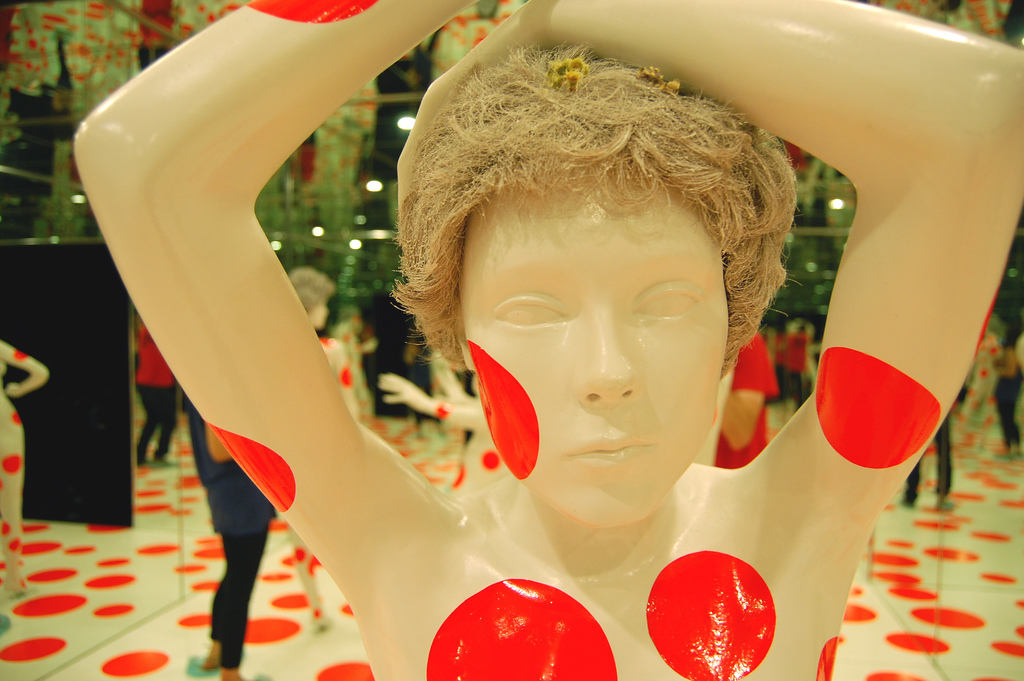 “No matter how I suffer for my art, I will have no regrets. This is the way I have lived my life, and it is the way I shall go on living.”- Yayoi Kusama

Yayoi Kusama fervently created artworks throughout her childhood, despite the lack of available art materials in Post-World War Two Japan. However, it was her correspondence with (renowned Modernist painter) Georgia O’Keefe that marked the beginning of Kusama’s life as an artist. O’Keefe encouraged Kusama’s ambition to move to America, and begin painting in a land more accepting of modern art. This was vital to Kusama’s development of an abstract style, as at the time Japanese culture was fixated on more traditional styles of making art.

After arriving in America; the 1950s-70s were fruitful years for Kusama. She produced work at an obsessive rate and soon established herself as an abstract and performance artist. She even had an intellect-based affair with assemblage artist Joseph Cornell.

It is easy to see how Cornell and Kusama had an intense connection; as Cornell shared many of Kusama’s traits as an artist. He focused on shape, collecting objects to arrange into boxes with glass fronts; whilst Kusama emphasised shapes in lurid colours on her canvases. Cornell was also extremely obsessive, producing work at a rate to rival Kusama’s own. It was this intense commitment to their art that led to the downfall of their friendship. They began to rely too much on each other’s approval of new work. Adding to this pressure was the way that Cornell’s obsessive nature began to leak into the other areas of his life. He began phoning Kusama several times a day, and would become very disappointed if she was too busy to answer.

When Cornell died in 1972 Kusama had already returned to Japan. Although it is worth noting that his death did hit her hard; and Kusama took a large collection of collage and assemblage material, gifts from Cornell, back home and used them in her work for several years following his death.

Having survived a turbulent career in America, Kusama remained in Japan from 1972 onwards. She continues to live there in a self-imposed exile due to mental illness, something that she has been dealing with since childhood. She now lives in a psychiatric hospital, yet she is in no way hidden away, and continues to produce art from a studio opposite the hospital. From this remote location she sends out her manically produced paintings, sculptures, writings, films and photography into the world.

Despite the wide range of mediums Kusama uses, and the long five decades of her career, she has always maintained a distinctive style. Her work often explores the female nude, and is peppered with dots and obsessive, abstract patterns. By making art in this style, Kusama embraces the Obsessive Compulsive Disorder that has followed her throughout her life. Her everyday vision is regularly plagued with dots and shapes, so it must seem natural for her that they feature prominently in her art as well.

Alongside these 2D manifestations of Kusama’s illness, she has produced a variety of large-scale sculptures. The most prominent amongst these are the ‘Accumulation’ sculptures. Kusama’s ‘Accumulation’ sculptures are made up of individually stuffed sacks, stuck to furniture and canvases to accumulate and look like an army of phalluses. The ‘Accumulations’, which were often photographed with Kusama lounging among them half-naked, are about Kusama adjusting to her fears through repeated exposure. She later tackled an eating disorder by doing the same with macaroni.

Although Kusama enjoyed some success whilst in America; her home country has often neglected to recognise the importance of her work. When she was a young woman setting out on her career, Japan placed a far higher value on traditional crafts than the modern and abstract work Kusama wanted to produce; and this imposed a toll on her ability to feel accepted by her homeland. As a consequence of Japan’s neglect of modern art, Kusama has become an artist who lives on the edge. In her autobiography ‘Infinity Net’, she describes her isolation both from her own culture, and the American way of life. Her battles with OCD have also caused her to live on the boundaries between health and illness; and her visual art often explores these themes. For example her ‘Accumulation’ sculptures.

However it was through painting, not sculpture, that Kusama began her career, and she has also recently returned to it (from the 1990s onwards). Again repeated patterns of dots are a widespread motif. The dots often decorate her abstract landscapes; yet sometimes Kusama creates huge canvases made up entirely of a pattern of miniscule dots. She calls these paintings ‘Infinity Nets’ (also the title of her autobiography), and they are an attempt to trap the fantastical world within her head.

Yayoi Kusama is inspirational as an artist mainly due to her use of creativity as a positive force to fight mental illness. She also is notable because of her daring personal exploration of that illness; alongside themes of feminism. Kusama creates massive, vivid works with unmatched speed. All of her art has a haunting energy that lasts long after viewing it.