The Female Alternative: Tilda Swinton – A Life in Independent Films 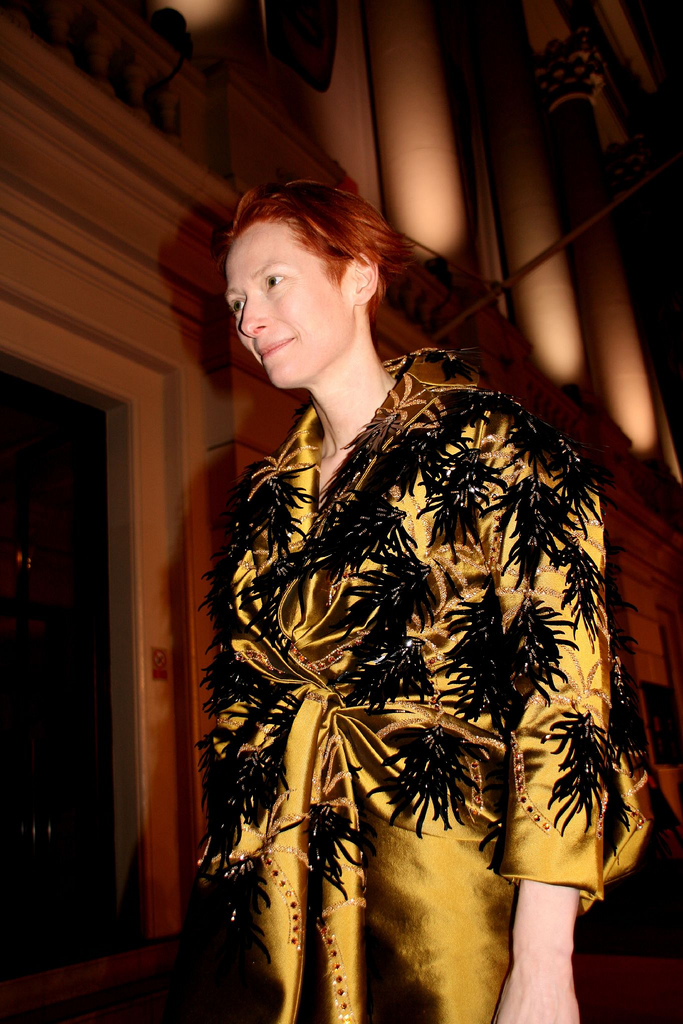 Tilda Swinton at the BAFTA awards

Tilda Swinton is all too often noticed only for her role as the Snow Queen in the Narnia films. Others will know her for her award-winning roles in ‘The Deep End’ and ‘Michael Clayton’. Yet, behind Swinton’s mainstream success are a series of under appreciated art-house and independent films:

Almost ten years after she graduated from Cambridge; Orlando wasn’t Swinton’s first film by far, but it saw her maturing as an artist into someone with an individual style. It was also the first film which emphasized her androgynous tendencies.

The film, directed by Sally Potter, was based on Virginia Woolf’s novel. Orlando follows the story of a prince who spontaneously changes genders literally overnight. Swinton’s acting (she plays the title role), reflects the intense, raw state of Woolf’s stream of consciousness prose. Poetic license didn’t need to be taken by the director, as the book is already extremely poetic, and openly ready for visual reinterpretation. However Potter still managed to cover new ground with her hazy shots of Uzbekistan and received a limited but positive critical response.

Despite its obscurity Orlando was definitely a milestone in Swinton’s career and shows her early dedication to imaginative and independent film.

Possible Worlds is a humanistic and complex piece of science fiction. It was directed by creative polymath Robert Lepage, and is therefore predictably high concept. The film also resonates with the eerie and bizarre qualities of ‘Twin Peaks’: an incredibly open minded FBI officer and a multitude of parallel universes.

Possible Worlds manages to be surreal but not silly, though some parts are more absurd than others (wired up and dismembered brains are a definite motif). It does feature some very bad acting alongside the good, yet Swinton manages throughout to bring the various versions of her characters tenderly to life.

Young Adam is a vital, brutal film. It follows life on the canals of the River Clyde; focusing on a hardy family, full of decrepit secrets. As Young Adam goes on, the story twists through murder, adultery and false accusations of both. Along with the plot, the atmosphere of the film and its refusal to have a moral compass creates a world that is laden with a sense of weary truth. This numbed but sturdy moral bankruptcy brings to mind the writing of Kafka or Camus.

Although the role of protagonist is firmly held by Ewan McGregor; Swinton’s character – Ella Gault – is at the centre of the story. Ella is the only character that can see through the other character’s chilly exteriors to what they really are. This should be a valuable skill in a world so full of deception and fluent liars, but instead it only proves to be a burden.

For this awkwardly brilliant thriller, Swinton reprises her defiant possession of the main character. As the title suggests the film is all about Julia: a woman seemingly fuelled entirely by a plethora of drugs and alcohol.

Creating the neurotic force behind Julia, leads Swinton down a new acting path. The character is definitely as eccentric as almost all of Swinton’s other roles, yet she is also brash and outgoing, to an extent that verges on delusional, in a way that Orlando and Ella Gault would have been incapable of. If anything this new brand of Swinton, solidifies the view of her skills as a well-rounded actor.

In I am Love Swinton takes advantage of her mature years and acting experience to play a dominant matriarchal figure. She also took the opportunity to produce the film alongside director Luca Guadagnino, over an elongated eleven-year development period.

Again all of Swinton’s powers as an actress are made use of, to bring to life a complex character that carries much of the action of the film on her back. This is especially impressive as Swinton had to learn a foreign language to act in the Italian production.

I am Love is a film rich with raised aesthetics. The fine costumes, architecture and countryside are all shot with a brilliance of atmosphere and contrasts.

Based on the book by Lionel Shriver, We Need to Talk About Kevin is not only daring enough to approach the harrowing subject of a teenage mass murderer; it also sets itself the challenge of examining that mass-murderer’s development right from being a baby. Accusations fly against Kevin’s mother as the film illustrates the nature-vs-nurture debate in the most depraved way possible.

Swinton’s character – Eva Khatchadourian – is the only voice we hear from in the book, and remains the jagged dual root of empathy and hatred in the film. Eva holds the plot together whilst her son Kevin tries his best to destroy it along with the rest of the world. However it is inescapable that as the mother of a mass murderer (even a fictional one), Eva is the target of an odd mixture of extreme feelings from the audience. It is a tribute to Swinton’s impressive mastery of acting that she manages to orchestrate this tirade of quickly switching reactions that range from outright hatred to considerable sympathy throughout the duration of the film. Each individual viewer will see something different in interpretation of Eva. This is what makes Shriver’s piercing novel so overwhelming; and Swinton carries it into the film with almost creepy ease.

I’m not a massive fan of ‘Only Lovers Left Alive’ but the other film Swinton has been in recently ‘The Grand Budapest Hotel’ is bright, witty and wonderfully absurd. Wes Anderson’s films always bring a colourful and cheery approach to life; without ignoring horrific worldwide issues. Swinton only appears briefly as part of a long roll-call of other famous faces, but she brings enough of herself into her role as an extravagant eighty-six year old to be memorable.