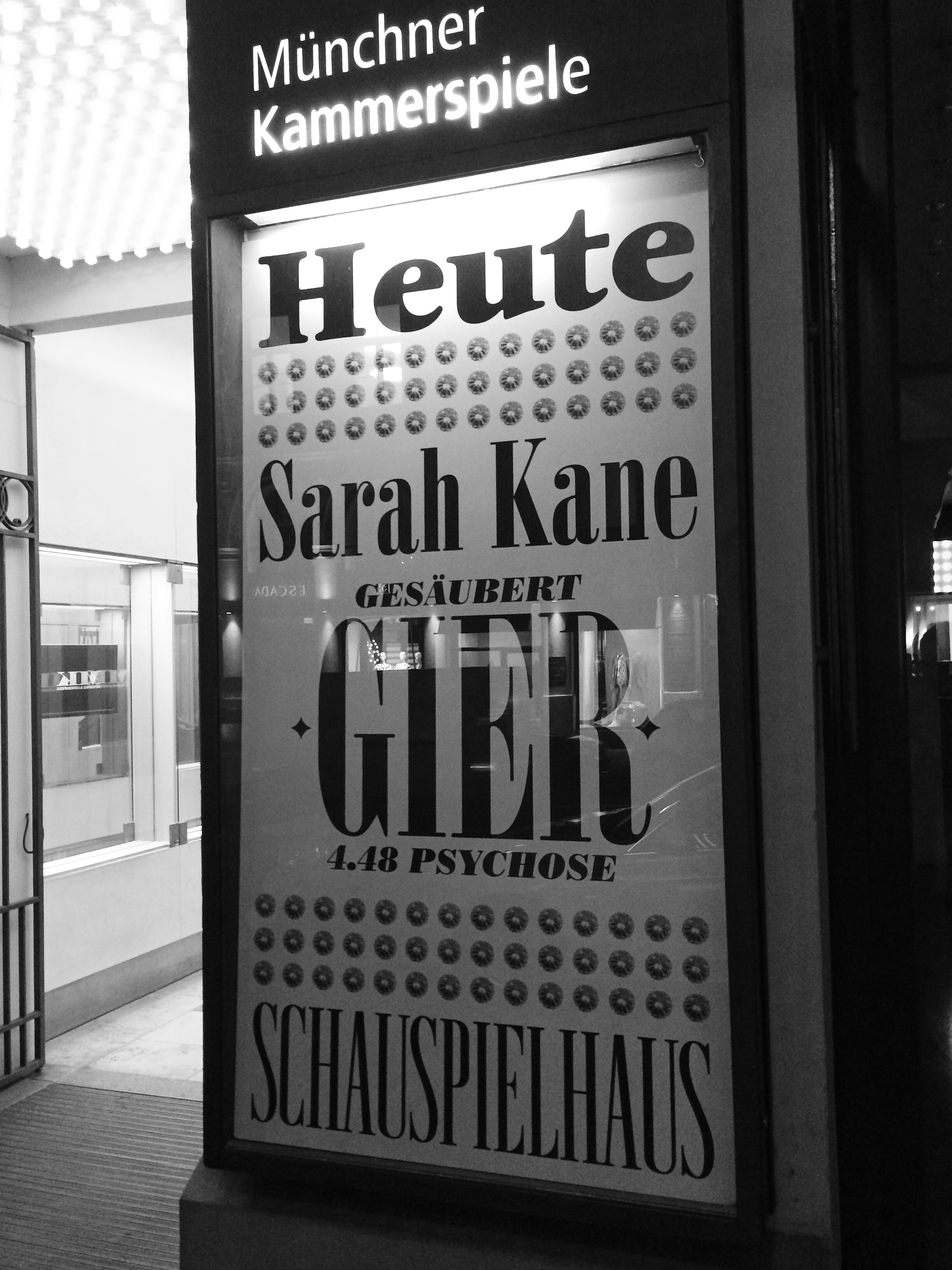 A poster for Sarah Kane’s ‘4.48 Psychosis’ , which was being performed at the legendary ‘Munnich Kammerspiele’ theatre in Germany

In December 1998, Sarah Kane was interviewed by journalist and teacher, Dan Rebellato, whilst writing her final play- 4.48 Psychosis. She ended the interview by saying: “For me there’s a very clear line from Blasted through Phaedra’s Love to Crave and this one [4.48 Psychosis]. Where it goes after that I’m not quite sure”, only four months later she killed herself at the age of 28. She was found hung by her shoelaces in a hospital toilet (she had been admitted after attempting suicide by taking an overdose). The play that she was writing was later realised to be a sign that she was already descending once again into madness at the time of the interview. Yet she seemed unaware that she was going to take her own life. In fact, the interview transcript is peppered with her laughter. She also describes her work and that of others in lucid detail throughout.

Perhaps she thought she would be able to battle through her next episode of depression as she always had done before. Her short life was plagued by illness, psychosis and hospital admissions. Even so, she managed to write five plays and one film script in her tragically fore-shortened career. She was a strong woman, stubborn enough to refuse to allow her illness to stop her creativity. Her tragic end does not make her any less of an inspiring female figure. She took on themes that no-one else at the time was willing to touch; and she did it with great imagination.

Kane’s career began with the play Blasted. It was a brutal piece of work comparing rape to war. It quickly became notorious amongst critics for its violence and unrealistic imagery. The critics at the time assumed the play had only one goal- to shock. However, if you choose to look more closely at Kane’s work, her detailed knowledge of theatrical structure shows through; as does her talent for curt, but profound, dialogue. She chooses to shape language like a subtle sculpture.

The media’s reaction to Blasted transformed Kane from working on the slush pile in the literary department at Bush Theatre; to being front page news. The sudden exposure shook up her mental health, but did not deter her from moving on and writing two more, equally brutal, plays- Phaedra’s Love and Cleansed. Themes of rape and violence, alongside surreal stage directions are most prevalent in these first three plays. Kane used her early plays to declare that “you can do anything on stage. There’s absolutely nothing you can’t represent in one way or another”.

By the time Kane wrote her fourth play Crave , she had grown so fed up of the sensational press reaction to her plays, that she decided to write under a pseudonym- Marie Kelvedon. Reflecting this Crave was definitely a break from the bleak violence featured in her first three plays. In some ways Crave was a modern interpretation of T.S. Eliot’s The Waste Land. As a result Kane chose to use much more florid language that usual; and whilst she still considered similar themes, the vivid imagery is cut back a little. The minimalist approach also stretched to include the names of her characters, who were each given a letter of the alphabet instead of a name.

Eventually Kane became so frustrated by the press in the UK, that she preferred to go to theatres in Europe, especially Germany, to have her films put on. She preferred their attitude to her material, and discussed with Dan Rebellato how the theatres over there had less of a budget, but better actors and more imagination to interpret her often surreal stage directions with.

4.48 Psychosis was again a completely different play. If Kane had lived longer she may have written increasingly experimental content. Some parts of 4.48 Psychosiscan be seen more as performance poetry than a play. It comes complete with lists (mostly of psychiatric medications and symptoms), and one line explanations of bizarre behaviour. Kane chooses to repeat the medical language favourite by the psychiatrists she must have been surrounded with, to create a play that is like a limp puppet. She shows that medical language has no real subjective meaning behind it- it cannot realistically be applied to a human being.

The tone of 4.48 Psychosis is much more futile and lethargic than the raw energy of Kane’s earlier plays. Another difference is that instead of being a narrative, 4.48 Psychosis seems to be describing the internal landscape of Kane’s head. It gives the audience a vantage point as being absorbed into part of Kane’s brain; and from there looking out at the world, as well as observing the other parts of her brain. During episodes of depression patient’s brains go through chemical changes. This explains why our front-row seats are mired with the mist of an endless grim outlook. Unfortunately Kane’s outlook for the future was far from endless. She died before 4.48 Psychosis was ever performed.