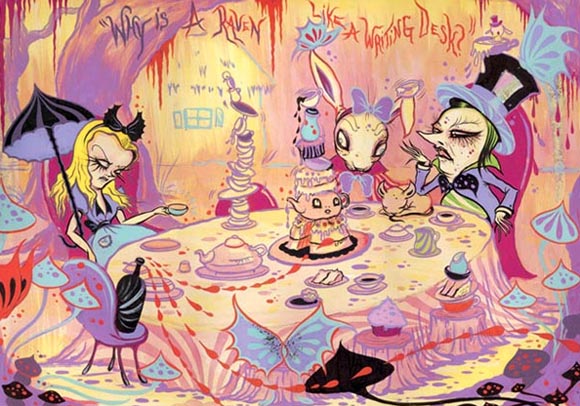 Camille Rose Garcia is an American artist who takes lowbrow art to new levels of gothic surrealism. Her dark vision has allowed her to discover the grim depths of children’s stories, alongside her use of art as a wider form. She creates acrylic and ink paintings; adding detail in pen and heavy usage of glitter. After creating a non-Disney alternative to ‘Alice in Wonderland’ and ‘Snow White’, Garcia established her presence in children’s literature with her own quirky children’s book ‘The Magic Bottle’. She has also exhibited artwork all around the world.

Twisted fairy-tale characters swarm together in Garcia’s imaginary world. Her characters are the recognisable archetypes from everyone’s childhood, but reinterpreted into something horrific. Yet as fantastical as they are, the stories she makes also have a solid relationship to our world. Garcia’s scrawny women and crowned polar bears are only the messengers. They bring messages laden with madness in the ordinary; distortion of moral values; war; and the human relationship with nature.

Garcia’s gothic characters first crept into public view, in the form of posters for local bands in California. Garcia herself played in a band called The Real Minx. These posters are peppered with anthropomorphic animals and panda-eyed, pointy-nosed women. No doubt this style was developed during her schooling in Fine Art to postgraduate level. She soon moved on from posters to exhibiting multi-media pieces and illustrating.

Throughout Garcia’s work are themes of bulimia, depression, self-harm and drug abuse. She refuses to cover up the brutality of these issues in her work. Instead of glorifying the anorexic figures, Garcia chooses to display her drawings of women as warped creatures surrounded by vomit and blood. As a result and despite them being fantastical creatures, Garcia’s creations are actually an incredibly honest interpretation of our world and all of its decrepit crevices. Mental illness and its complexity are obviously a vital personal theme for Garcia- and something she wants to be honest about despite its ugliness.

Don’t be fooled into thinking that Garcia’s paintings are all tragically depressive. Colour is also a vital element of Garcia’s work; she very rarely produces a piece with muted colours. Shades of magenta, turquoise and gold lift her drawings beyond their black outlines. Multi-coloured tears weep out of her canvases, bringing bipolar themes that relish happiness and sadness purely for what they are in each moment.

Garcia’s ‘Alice in Wonderland’ shocked audiences. This was mostly due to its outright acceptance that Wonderland can be interpreted as one long drug trip. Alice is depicted sucking on bottles of alcohol and surrounded by the occasional needle (if you look hard enough). Yet if you gaze past the quaint surface layer of Lewis Carroll’s original text, you can see that all of Garcia’s illustrations have grounding. Absalom the caterpillar is evidently smoking a hookah pipe; Alice consumes suspicious cakes and mysterious drinks; and the people she meets in Wonderland are irrational and show the mood swings present in people who use recreational drugs for prolonged periods. All Garcia does is take on these elements and exaggerate them beyond subtext. Whether Lewis Carroll himself used recreational drugs or not has been argued about for a long time. However it is important to remember that hard substances were not controlled in Victorian times, and it is entirely possible that Carroll observed their effects on other people. Garcia seems to have also had some kind of personal experience with recreational drugs.

Meanwhile, illustrating ‘Snow White’ was the perfect opportunity for Garcia to explore her opinions on female beauty. Snow White is drawn with Garcia’s usual unforgiving grim overtones. She uses Snow White to bring forward themes of the pressure from society for women to be beautiful and thin. She then tackles the matter of eating disorders that frequently result from this pressure. Again this relation to the modern world can be found in the original text of Snow White. Essentially the fairy tale is an argument about beauty between generations of women, alongside the theme of beauty as power.

The ‘Snow White’ and ‘Alice in Wonderland’ illustrations both have a lot in common. The two girls are drawn in the same style, and with psychedelic surroundings. Their relationship with the other characters in the illustrations are disturbed, mostly because Garcia takes characters and makes them all considerably disturbing. Although society’s rules regarding female beauty are well represented, Garica also tries to take her characters outside of what is real. None of her characters look like they could physically stand up on their skinny legs, let alone actually exist.

I’m not going to suggest that Camille Rose Garcia isn’t a feminist. She is. Yet her work also seems to transcend feminism. Her relationship with her art is much more personal than something persuasively feminist. Garcia chooses themes that have personally affected her, and then exposes them, so that an audience can relate back to her view of the world. The feminist aspects of her work come through because Garcia is a strong female who nurtures her independence.