The Fabulous Life of Pandora: Episode 5

Pandora Huntingdon-Smythe in Columns on 6 December, 2010. 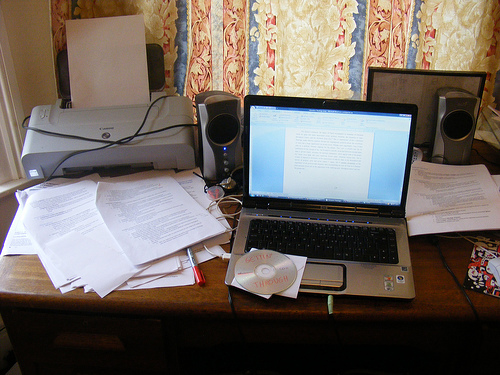 I realise that a number of you – assuming that my readership comprises of people apart from my mother – will be quite disappointed to learn that this week, due to unfortunate but not entirely unforeseen circumstances, my column will have to be brief.

It has come, of course, to that particularly nasty time of year when I realise just how little work of academic value I have done over the course of the term, and am subsequently forced to put myself under house arrest until said work is completed. I am currently in bed, furiously typing at half past two in the morning, surrounded by empty crisp packets, biscuit crumbs and cans of coke. My essay, naturally, remains unwritten as I have spent countless hours browsing eBay listings and catching up on programmes in which I would normally have no interest.

How it has got to this point is uncertain. I found myself in this exact position at the end of each term of my first year, and ended up equally stressed, over-worked and sleep-deprived. Considering how this year actually counts towards my degree, you would have thought I might have more impetus to produce pages and pages of historic gold. Alas, however, I have no drive.

I also have no excuse for my lack of productivity. I could blame the adverse weather conditions that forced the library (or what I like to term “the Historian’s laboratory” – seriously, I never leave the damn place!) to close early every night this week. The snow is my official excuse and the one I tell to each person that draws attention to my incompetence. Really, though, I am just incapable of working without The Fear. Which, to my utter detriment, I invariably never get until the night before.

What is certain, though, is that I have been here so long that I am starting to actually fuse physically to my bed. This is not even a joke: I have been eating, sleeping, working, sleeping and eating some more in my bed all this week, only rising to shower or refill one of my many, many hot water bottles. I am also sure that I have been wearing the exact same clothes to do all aforementioned activities since last week. And, even better, I have a sneaking suspicion that I am now lying in the remainders of what was my midnight snack. Two days ago.