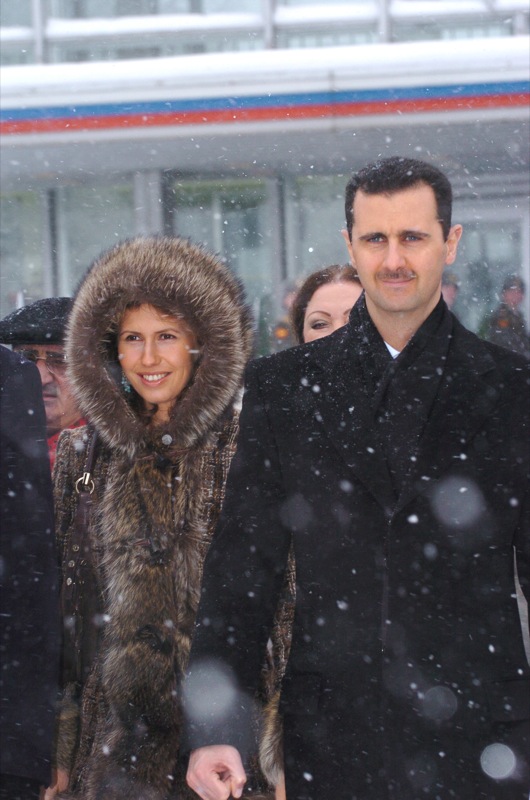 Syrian president Bashar El Assad and his wife: but who wears the trousers?

To return once more to that most fertile of territories, the land of the dictator, is quite a relief. For a start, they frequently provide opportunities for amusement with their peculiar habits, and – all too often – horror at their terrible atrocities. There is one aspect of the dictator that I have not, as yet, addressed. It was once said “behind every great man is a great woman,” and this phrase is as resonant for dictators as it is for most others. What drives the wives of the great dictators? What motivates them to stay by their husbands through thick and thin as they destroy their nations and oppress their people? And why aren’t there many famous female dictators?

I think that it can be firmly stated that certain women are attracted to men in positions of power (how else could John Prescott have ever acquired a mistress?) – and there are few who are as powerful as the typical tyrant. These men have the potential to offer them more than they could otherwise dream of: fabulous jewellery, expansive (and expensive) palaces – and footwear. Imelda Marcos, wife of Filipino dictator Ferdinand Marcos, is famous (perhaps more-so than her late husband) for the spectacular number of shoes in her collection, some 3000 pairs. These were discovered when she and her husband were forced to flee the country after a coup. Eventually however, she returned and is now a somewhat rehabilitated political figure in the country – though presumably one with fewer pairs of heels. Indeed, many of her former “treasures” can now be found in their own dedicated museum.

Asma Assad (wife of Syrian President Bashar al Assad), is also well known for her expensive designer clothes; indeed, prior to the Syrian revolt, many Western fashion magazines applauded her for her taste and style. Extravagant statements were made about how she might prove to be a moderating influence on her husband. American Vogue famously gushed over her, calling her a “rose in the desert”. Sadly, she has not had any kind of moderating effect on her husband and it has been suggested by some journalists that she is distracting him from accepting the full horrors perpetrated by his regimes.

But what about female dictators themselves? Female dictators are even rarer than all other types of political women. Some of the few that do spring to mind are generally monarchs from the past: Empress Catherine the Great of Russia, Queen Ravanalona I of Madagascar (whose tyrannous antics led to her being given the soubriquet “the Cruel”), “Bloody” Queen Mary I of England (and arguably also Elizabeth I). But these examples are all dictators from the past, women thrust into a brutal world of dynastic politics by simple accidents of birth. Are there any modern examples of such women?

There are currently 195 countries in the world and of these, there are around twenty with female leaders or heads of state, with the exact number varying depending on the precise definition of what counts as a world leader. Of these twenty, only three individuals are not democratically elected: the Queens of the Netherlands, Denmark and the United Kingdom. Depending on your definition (and of course some people will count monarchs) therefore there are not truly any female dictators. The closest recent example is a divisive figure in India’s political past: Indira Gandhi (not a relation of Mahatma Gandhi but rather the daughter of Nehru, India’s first Prime Minister). After alleged malpractice in the 1971 Indian parliamentary elections, and the rejection by Gandhi of a court’s verdict on the matter, there was an up-swell in opposition protests leading to the imposition of emergency powers by the government. Under these powers, Gandhi ruthlessly cracked down on opposition activity and rights to freedom of speech and expression. She rewrote the laws governing elections to secure her position from any further charges of impinging on democratic freedoms – a tactic that has been, and remains, one of the most popular moves amongst dictators across the world who are desperate to add a veneer of respectability to their regimes. In her defence however, the laws were eventually lifted and fresh and free elections held which she promptly lost in spectacular fashion. After a brief period in the wilderness she was eventually returned to power (as her opponents were merely unified in their dislike of her regime) and remained Prime Minister until her assassination by her own bodyguards in 1984.

So what can we conclude about female dictators? They certainly exist, but on the whole they’re not to be found anywhere, at present, on the political scene. While I have found several examples they are generally figures of the past who rose to power through antiquated feudal systems. In the future though, can we expect to see an influx of tyrannical women accompanying the increased spread of female emancipation? Probably not; on the whole, countries that have stopped suppressing women’s rights tend to be stable, democratic nations. Perhaps, therefore, there is at least one glass ceiling through which, perhaps we can say happily, women may never break.