The Decline of the English language 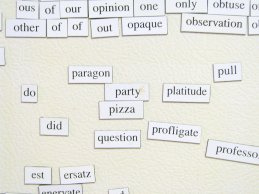 As an English student I should consider it my duty to demonstrate and conserve the proper use of our lovely language as though it were an endangered species. And so I am attempting to. I detest the new “modern” versions of Shakespeare plays where everything is translated into 21st century language and I can barely say the new version of the Lord’s Prayer (why on earth has someone felt the need to change “thine”, as in “thine is the kingdom”, to “yours”?) without snarling in disgust.

However, whilst being a very vocal supporter of keeping “thy” and “thee” in their rightful places, I also have an unfortunate susceptibility to picking up, repeating and becoming addicted to ugly new phrases, and generally mucking around with perfectly nice words. This habit of changing and often abbreviating my vocab (there’s an example) is one that is nauseatingly Durham and makes me want to bite my own tongue off. I, Molly Brown, am one of those sad excuses for people who say “lol”, “lolz” or “megalolz” in real life. I say “probs”, “amezz”, “appaz” and occasionally “ridic”, “awks” or “totes”. Once I even said “hilar”. Ouch. As well as shortening words I also use terrible expressions like “shit the bed”, a Birmingham phrase (appaz) which makes my mum shudder. I am one of many people who have a wealth of perfectly usable, unabbreviated language at their fingertips but have tumbled pathetically into the trend of language laziness.

Our language is deteriorating, and not just in the disregarding of proper words and word usage, but also in appropriateness. There is little restraint on the use of “bad” language that was once reserved for special/necessary occasions (when angry, infuriated, in pain or very drunk), and only a regular habit of the uneducated, the unintelligent or those with anger management issues. The nice language of old people is testimony to this – when my Granny recently commented that a dessert looked like a turd, the whole family nearly fell off their chairs in shock.

Today bad language is even used professionally. Recent political rows often seem to involve swear words, such as MP Mark Pritchard courteously informing the Commons Speaker, John Bercow, that he was “not fucking royalty”, and when on a work experience placement over Christmas at a large, well known company, I was shocked by how often “shit” and “fuck”, not to mention the c-word, were used by employees and boss both in casual language and during important meetings.

An informal, overly familiar style of work e-mails and correspondence has become standard in business, a topic discussed a short while ago on Radio 4, where it was concluded that “Hey” was too American (it is “demanding attention” and “implies we’re all very groovy”) and that “Yo” was insulting. The traditional opening with “Dear….” and ending with “Best wishes” was favoured – rather than “Cheers”, “Best”, “Bests”, “Bestest” or (apparently this is all the rage right now) “BW”.

I experienced this firsthand when I sent a formal, professional e-mail to arrange my work experience and was answered with a line or two as chatty as I would be to a very good friend, telling me to “pooter down”, wishing me a “cool weekend” and signing off with a KISS. She might as well have started it with “Aite babe?”

Generally our language has become, with us barely realising it, ruder and cruder. We blaspheme so regularly (e.g. “Jesus Christ” and “Oh my god” – shortened to OMG. Obvs) with little regard to whether we’re offending anyone religious that it’s become as harmless an exclamation as “Gosh”. “Taking the piss” is now such a standard phrase that the alternative, less crude “taking the Mickey” sounds ridiculous – I noticed this when trying to tone down my language on visiting my little cousins – and in a couple of decades I wouldn’t be surprised if the King/Queen are using “yeah” not “yes” on formal occasions. Bad grammar is going unnoticed as the painfully wrong “me and Molly” becomes acceptable, and no one seems to care about the differences of “your” and “you’re” or “there” and “their” in typed language anymore.

The universal flaw in our generation’s speech is the obvious extreme overuse of “like”, but this is only one of our hallmarks. Ian McEwan observes in Enduring Love (sorry to whack in a literary reference) that young people today often add random question marks onto the end of both spoken and written sentences, something that my sisters do continually, and having been berated by my family for my overuse of “and stuff” to lamely finish off a list, or to make something deep seem less cringey, I’m very conscious of my own language flaws. I think our abbreviation obsession is largely thanks to the amount of typing we do – we may now be too cool for text speak but it’s an effort to always type, and talk, in full language when we want rapid answers.

Hugh Grant’s immortal speech in Love Actually lists William Shakespeare and Harry Potter as symbols of our small but great country. Would Willy Shakespeare have sold any plays if he’d written “To be or not to be? That is, like, the question”? Would Harry Potter have been popular if J. K. Rowling finished her lists with “and stuff…” and wrote “probs” and “appaz” because she “CBA”? As the hottest Prime Minister we’re ever likely to have continues: “…since bullies only respond to strength, from now onward I will be prepared to be much stronger.” We need to be much stronger and fight the urge to succumb to laziness, waging a war on sloppy language. Violence may even be necessary in this case (make pacts with friends to pinch/smack each other whenever certain words or phrases are used) as we defend our language and struggle to maintain some of the politeness, dignity and stiff upper lip that has always characterised our wonderful nation.