The Cult of the Fluorescent Vest 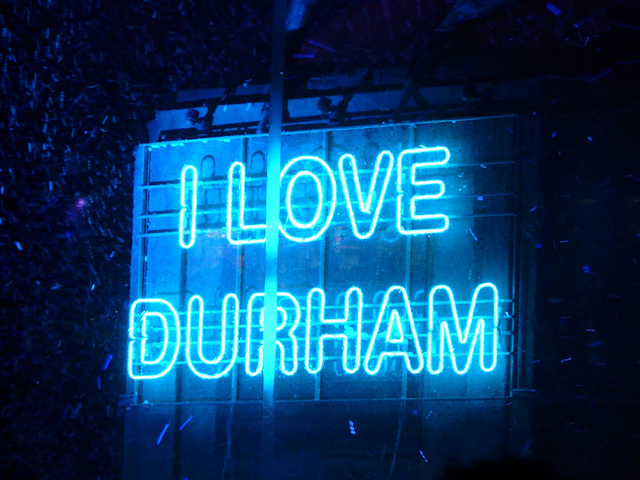 Even Durham isn’t safe from the glowing invasion

It is a common sight across Britain today, shining brightly in all its luminous glory. From adorning the torsos of local traffic wardens to the Prime Minister on a trip to a civil project, the fluorescent vest can now be viewed across the country. And it is spreading fast…

At the time of writing, the Luminaire festival in Durham city centre has recently finished. The lights are dimmed and no longer do the streets resound to the pounding sound of the feet. Amongst the great throng, the presence of the fluorescent vest was easily visible (and quite rightly, I suppose, as that is their purpose). Around the event patrolled the stewards, keeping the crowds in line with their temporary fences and their constant incomprehensible chatter down their megaphones. While I, like so many others, was dazzled by the displays, I must also confess myself to being rather less than enamoured with this group of fluorescent men and women. Like creatures of some distant planet, they patrolled hither and thither, herding crowds into impossibly tight spaces, almost as though they were the police, happily kettling a student protest. Every member of this fluorescent team appeared to take particular delight in their task and their minor position of authority, cheerfully watching as people began to complain amongst each other and at them for their appalling organisation. But, strangely, very few seemed to question the authority of those in the luminous jackets.

I recall beginning my last article with Daniel Defoe’s words: “All men would be tyrants if they could!” And it is my belief that this holds especially true with the fluorescent jacket. As an example, let us take a walk down the quietly darkening streets of Durham. To begin the journey near Prebends Bridge which was lit, for the occasion, in a series of colours that would put Joseph’s coat to shame: A quartet of luminous fellows greeted my arrival with a series of curt instructions to follow the river round due to the imposition of a one-way system. Behind them, the bridge stretched bear with not a soul upon it. Reluctantly, I followed their advice, trudging along the long and darkened bank with a small collection of other individuals, all of us hopeful that one day we might reach our destination. Up over Framwellgate Bridge, it was packed with visitors making no effort to move as they photographed colourful Prebends from a distance.

And then onwards, moving at a snail’s pace towards the market square. There the crowd was moving at painfully slow pace, barely shuffling forwards. I negotiated this best as I could until I was confronted with a metal barrier blocking any movement out of the marketplace. Here and there marched members of the luminous band, one of them strutting about self-importantly with a megaphone into which he bellowed a constant and incomprehensible babble. The crowd shifted around me, clearly displeased at having to wait. And oh, how long they waited. Forty minutes to move from the marketplace up towards the cathedral, all of us held back by a baffling one-way system and the instructions of the brigade of fluorescent mini-tyrants. In the end, I abandoned my attempt to go any further. I slipped through the crowd and, ignoring the looks of one of the band of “fluorescent arses,” slogged over Elvet Bridge – that great, wide, expansive structure also subject to a ludicrous one-way policy – and into the free and unregulated air.

On my subsequent walk home I must confess that I began to develop a rather intricate theory surrounding this luminous horde of tyrants. Namely, the apparent power the high-visibility jacket possesses to turn ordinary people into dictators. I am not a psychologist and therefore am in no way qualified to formulate an explanation for this behaviour, but I’m more than prepared to have a go anyway. I would hazard a guess that perhaps the bright colour dazzles the wearer temporarily with their own brilliance… or perhaps there is another more complex physiological explanation. Whatever the case, overzealous stewards in their fluorescent coats are, without a doubt, the bane of an enjoyable evening. They direct groups wherever they will, exercising power they really should have no right to wield.

Now I fear I must step aside from what is in danger of becoming a rather significant tirade against the cult of the fluorescent jacket and the idiocies perpetrated by its followers. In the interests of balance I must point out that the jacket does, without a doubt, save lives on the road when worn by cyclists or the police or various other common figures. They adorn the bodies of individuals ranging from construction site workers to Karl Lagerfeld (as part of a bizarre French road-safety campaign). Indeed, in the cause of enhancing road safety, the jacket is being put to a rather innovative use… at least it is in China. Officials in Hunan Province in Southern China have (at least according to the Metro – that ever-reliable source of tabloid-style journalism), started dressing the local statues of monkeys in fluorescent orange jackets in the hope that it will reduce speeding offences. It is easy to see the thought that lay behind this novel idea – something interesting beside the road will inevitably cause drivers to slow and stare, although clearly they failed to anticipate that distracted drivers are hardly any safer than speeding ones. Their choice of monkey statues too remains, to me at least, a mystery as they were apparently specially carved for the purpose.

So, what can be concluded about the fluorescent jacket? It is here to stay, there is no doubt about that. And, perhaps it would be better were this cult not suppressed like so many others. Though that is not to say that it won’t one day become equally dangerous and even more pervasive. But at least we will be able to see them coming.