The Cult of Putin 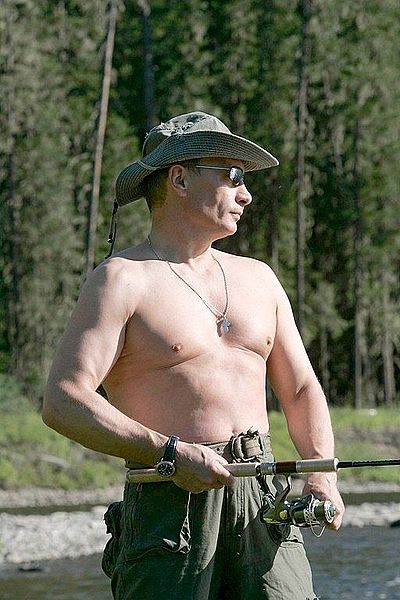 I admit from the outset that I’m no expert on Russian politics, but I know that it can seem weird at the best of times. Putin has published his own calendars featuring his shirtless self on horseback, at the controls of a helicopter, and in other generally manly poses, and it’s well known that he is still unbelievably popular. After his two terms as President, under Russian law he could not stand for a third – so he ran for Prime Minister, won by a good margin, and has proceeded to act as the power behind the presidency ever since. Since he’s eligible to run for President again in 2012, Miss February’s (supposedly) suggestive slogan “How about a third time?” shows that he’ll definitely get at least one vote.

Can you imagine a bunch of Labour activists doing this for Gordon Brown? “How about another term, but this time we vote for you?” Russia appears to have allowed Putin to put himself on a pedestal right at the pinnacle of celebrity culture. The question is, whether it’s his political status that keeps him famous, or his fame that keeps him so popular in politics (affectionately known as the Schwarzenegger effect). The former is possible – he has a reputation for strength and resilience and plays on nationalist tendencies effectively, holding his own against Europe and the USA. If the latter is true, he’s approximately a sex-tape away from world domination. It’s probably a mixture of the two, but if the next suspect link your mate sends you is entitled “One Night in Vladimir” you should be very worried.

Less surprising was the response to the calendar – in fact, I’m surprised it wasn’t produced first: another group of female students have made a calendar of their own. “Vladimir Vladimirovich, we have some questions…” instead features girls posing with tape over their mouths in protest at the alleged silencing of political dissidents. Captions included “Who killed Anna Politkovskaya?” referring to the unexplained death of the journalist, one of the Kremlin’s loudest critics, four years ago. Not quite as good a present for poor Vladimir, but probably quite important.

It’s easy to laugh so much at Putin’s idolisation that we forget the dissent he faces. Alleged political assassinations, illegal detention and the regime of a former KGB man do seem to fit unsettlingly together. The bizarre 2006 murder by radiation poisoning (of all things?) of Alexander Litvinenko in London is one of many controversies which has refused to fade away – especially since Litvinenko had sought asylum in Britain, after accusing his superiors in the secret service of such murders; significantly, he had named Putin himself as having ordered Politkovskaya’s death. At least Paris Hilton’s biggest crime was only House of Wax.

It would seem that he has a lot to answer for, but it’s doubtful he plans to do so. In the meantime, challenging him and the authorities still seems a risky business in Russia, and it’s quite alarming that one man can have such a hold on power, both within the political regime and informally through the media. The calendar war this week is part of a broader propaganda war which, though existing in and across every political arena, seems heightened around this one man.

The first part of this “take a random news story and ramble about it” column, then, leaves me scratching my head at political celebrity and Putin’s grip on the Russian mind. Happy birthday, Mr Putin. Enjoy your calendar. But a few people might like some answers.