This is the third installment in Flora Phillips’ “Dream Dustbin” series, where she takes a dream and creatively reinterprets it through artistic mediums such as illustrations, photography, written verse or narrative, soundscapes, sculpture, etc.

For this piece, Flora has created a cocktail recipe inspired by Ollie’s Dream. (It’s edible- give it a shot!) 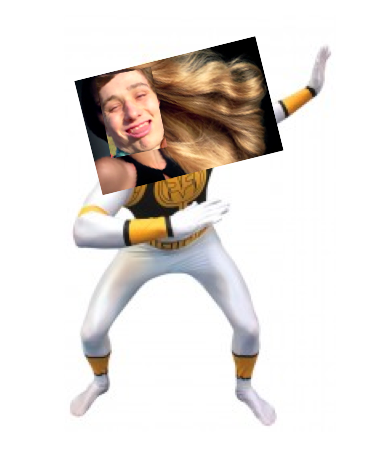 “Ceasing to spare another moment, however perplexing the situation now appears, Ollie the ‘Hot-White-Power-Blonde-Supermodel-Ranger-From-Sweden’ now throws him/herself straight back into the action.”

A Summary of Ollie’s Dream:

Twilight envelopes over the castle. Looming shadows tower over the walls, the air crisp, chilled in silence. A wisp of wind; a swipe; a leap. A faint white figure darts across the bridge; a rapid flash of feet soars over the vast stone battlements. A nimble dash of silver slicing through the night, rushing towards the iron gates. The figure vaults; a hollow gust of air the only sound not faint enough to echo…

What or who is this acrobatic phantom of the night? Why in such haste? What mission is it that they embark upon? This is no ghoul or mystical being. This is a ferocious ranger, with a hidden yet magnificent power.

This is, as a matter of fact, a Power Ranger; the ‘White’ Power Ranger, one of a variety of other colourfully armoured morph suits.

It is custom for superheroes either never to reveal their true identities, or that they have alter-egos that are available to the public but are transformed and overcome when they put on their garish costume and over-sized belts. In this particular dream, it seems Ollie was (subconsciously) intent on solving the mystery of who the man, woman, or whatever thing which possesses skills in relentless martial art capacity, was behind the mask.

Ollie recounts the setting as a ‘Bowser-castle thing’, reminiscent of another fictional icon of our generation’s early years of action gaming; perhaps too many failed attempts at defeating Bowser on Mario Kart has spurred on a determination to conquer him in the imagination, free from the responsibility of pressing the right buttons on the controller and the incessantly irritating ‘clicking’ sound. Alternatively, Durham Castle is an inspiration in itself, so perhaps Ollie encountered some member of staff there who resembles Bowser… (please note this entire article is based on speculation – I personally am fortunate enough to have never come across such a character).

For Ollie, dreaming is aspiring. In this instance, the subconscious not only generates a particular vision, but a desire. Though, to be perfectly frank, who on earth wouldn’t want to be a superhero, let alone a Power Ranger?

Thrilling suspense builds as Ollie the White Power Ranger breaks into the castle, soaring over the turrets and hurling himself down the steps into the barren courtyard. The only sound is his own frantic heartbeat…

A sudden rush of wind, a heave of breath, and out of the lifeless darkness a flood of black robes and flashing eyes surges towards our ‘hero’. What is this black mass of feet, hands and billowing cotton? This is ‘classic banter’, according to Ollie. This is a pack of enemy ninjas. This is, most importantly, where the real action unfolds.

Like a strobe light at an illegal rave, Ollie the White Power Ranger explodes into the midst of the ninja army, thrashing against their striking fists. He flattens the first wave. Another rises up and a second violent gust attacks. Another series of lethal strikes, limbs flailing as more bodies are thrown to the ground.

Pausing to heave for breath, the expected sense of triumph is suddenly shattered; in an instant, tens of the mummified demons encircle the single shining figure. Ollie is isolated and for the first time, paralysed… In this moment, Ollie’s imagination takes a rather eccentric turn; desperate times call for a more astonishing rather than necessarily desperate measure. It isn’t the fact that Ollie, in the instant where he needed the most protection possible, decided to remove his ‘protective’ mask. It is what is to be found beneath the mask which he assumed at the time was the best and only form of defence in the given situation. It was not Ollie. The astonishing measure taken by his subconscious is a transformation of hair colour, eye colour, and gender.

Beneath the mask, with a characteristically vivacious swish of blonde hair, the epitome of the ‘hot-Swedish-female-model-in-a-shampoo-advert’ is revealed. Classic banter.

Ceasing to spare another moment, however perplexing the situation now appears, Ollie the ‘Hot-White-Power-Blonde-Supermodel-Ranger-From-Sweden’ now throws him/herself straight back into the action. He/she tears through the swarm of black demons with a new wave of energy, empowered by his/her billowing golden locks; a cosmopolitan Samson striking like a lightning bolt through the sea of her male enemies. The adventure concludes with the fading image of a shimmering warrior thwarting all in his/her path, unrelenting and unstoppable…

It would seem that the dream of having superpowers has been designated a promotional offer of ‘two for the price of one’. Not only had Ollie’s subconscious granted him limitless speed, agility and strength, but it has invested him with the almighty power of femininity. Rather a spectacular combination it would seem. As profound elements within our society, martial arts and the question of sexuality have never been so ostentatiously explored. If we are to make any judgment of the reason for it, we cannot deny Ollie’s ambition the appreciation it deserves. If he fulfilled his dream to be a superhero, or to be a hot Swedish supermodel, then in doing so he also achieved a wonderfully rich, subconscious narrative in order to experience it – a superpower in itself.

I look forward to next year’s Halloween where I shall be keeping my eyes peeled for a silvery figure cavorting across the cobbles in a morph suit and oversized blonde wig, drunk on seven glasses of their own personalised cocktail, mistaking lamp posts for ninjas, and hearing thickly Swedish-accented cries of ‘#girlpower’ echoing into the night sky…

Recipe for ‘The Blonde Power Range’, a Cocktail Inspired by Ollie’s Dream:

Sensuous, elegant; a drink of effortless glamour and allure…

With an unforgettable and almighty punch right in the eyeball.

For the Ranger’s suit:

1. Stir the ground black peppercorns with the strawberry sherbet. Coat the rim of the martini glass with lychee syrup; then dip the rim of the glass in the pepper-sherbet mix.

2. Measure out the vodka, sourz, splashes of lemon juice and lychee syrup, and egg white, and add them to the shaker. Shake thoroughly and vigorously, with much enthusiasm, until the egg white turns the liquid frothy and light. Pour into the martini glass.

3. Measure out the passoa and use the bar spoon to add it to the bottom of the martini glass.

Peppered sherbet shocks the taste-buds into overdrive, followed by a smooth, rich and delicate lychee flavour, hinted with playful zings of lemon and peach. As the drink oozes down the throat, a sudden heady blast of vodka edges with a passoa tang. Finishing the sip to be left with the tingling sensation of the peppery sherbet crystals, like little ninjas bouncing on the tongue, while fire and passion are burning in the belly.