Tepito: An Exploration of Mexico City’s Most Feared Neighbourhood 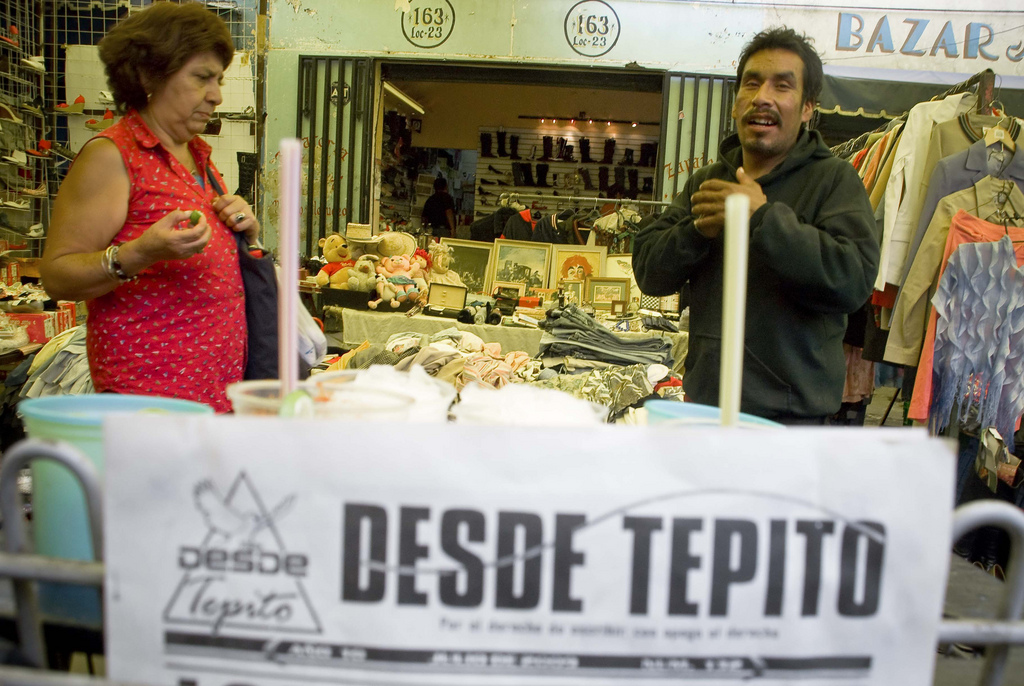 I first visited Tepito, the Barrio Bravo (or fierce neighbourhood), two years ago and I left the metro station with trepidation. Its metro logo is a boxing glove to celebrate the many world famous boxers who were born there such as Rubén Olivares and Rodolfo Martínez, both former world champions. Rave music and a chicano version of Gangnam Style blasted out from the market place at the top of the stairs and as one emerges from the underground, you feel the swarm of people buying and selling amongst a packed market place. The streets are stuffy and an area of around 8 football pitches side-by-side sell all products imaginable, from the everyday such as cooking and cleaning products to pirate DVDs and video games. The stalls of the tianguis selling Catholic paraphernalia sit next to
and sex stand stalls. Tepito represents a blast of colour and the strange and everyday bundled together in an exciting and chaotic place. They say that in Tepito, everything is for sale, except dignity. I was interested to find out more and wondered: does Tepito deserve its terrifying reputation? Does it have more to offer?

The barrio of Tepito is famous for selling counterfeit goods and has a reputation for arms and drugs trafficking. Many street robberies happen here with robbers tracking shoppers from the moment they get off the metro, watching what kind of purchases they make before confronting them and making threats – which is often enough for visitors to give up their goods before any violence occurs. I have now visited this famous barrio around seven times and I have never once had a bad experience! A friend warned me four basic things: don’t wear flashy jewelry, don’t show off expensive electronic items, don’t count money in the street and don’t arrive expecting to find problems. This seems to be pretty sound advice when walking anywhere in any big city around the world.

Despite crime and social issues, all of the residents from Tepito whom I spoke to are extremely proud of coming from this area. The people form a closely knit community which, more successfully than other areas over the years, have evaded modernization to maintain several of the customs and traditions of the past. Leadership structures are informal and come about through discussion in the community, similar to indigenous areas outside of Mexico City. Moreover, due to its fearsome reputation, Tepito commands a strong respect from outsiders, including the police authorities, who often see the area as a place rich in opportunities for taking bribes. There are also reported to be connections between money taken from counterfeit goods and the funding of national political parties. Recent issues with drug-taking among young people and through the vast amounts of money to be made from counterfeit goods have led to more of an individualistic attitude among residents. A large influx of Asian migrants has also impacted upon the demographic make-up of the barrio.

Religion in Tepito: The Santa Muerte

Officially, Saint Francis of Assisi is the patron saint of the area. However, many people say that the Santa Muerte is the real saint, a mixture of Catholic, ancient Aztec beliefs of the God Mictlantecuhtli and also contemporary ideas. The Saint Death is a skeleton of a lady, much like the Virgin of Guadalupe, and her shrine on Alfarería Street is covered with jewelry, alcoholic drinks, money, toys and notes of thanks for prayers. On the first of November each year, around 5000 people come to listen to mass for the Santa Muerte. The main difference in this mass is that marijuana is smoked instead of the traditional ritual with incense.

On my latest trip to Tepito, I was surprised to find the area is filled with wonderful art, literature and culture. Tepito Arte Acá is one such example which produces theatre production and is home to many wonderful writers working in collaboration with diverse cultural groups from across the Mexican Republic. These include rural communities, indigenous groups, homeless people and more. They also run courses for young people and those just interested in learning about theatre. With over thirty years of working in Tepito, this organization is doing really well promoting the exciting and good work that the inhabitants of the area are doing.

On my afternoon in Tepito, I met friendly people, I bought cheap goods and I was impressed with this area buzzing with life and colour. Exhausted, I arrived home and was ready for a nap. I would highly recommend a visit to people coming to Mexico but make sure not to wear too many flashy things and always be respectful.

For more information on Tepito Arte Aca, check out: http://www.tepitoarteaca.com.mx/

Mictlatecuhtli: one of the Aztec gods of death