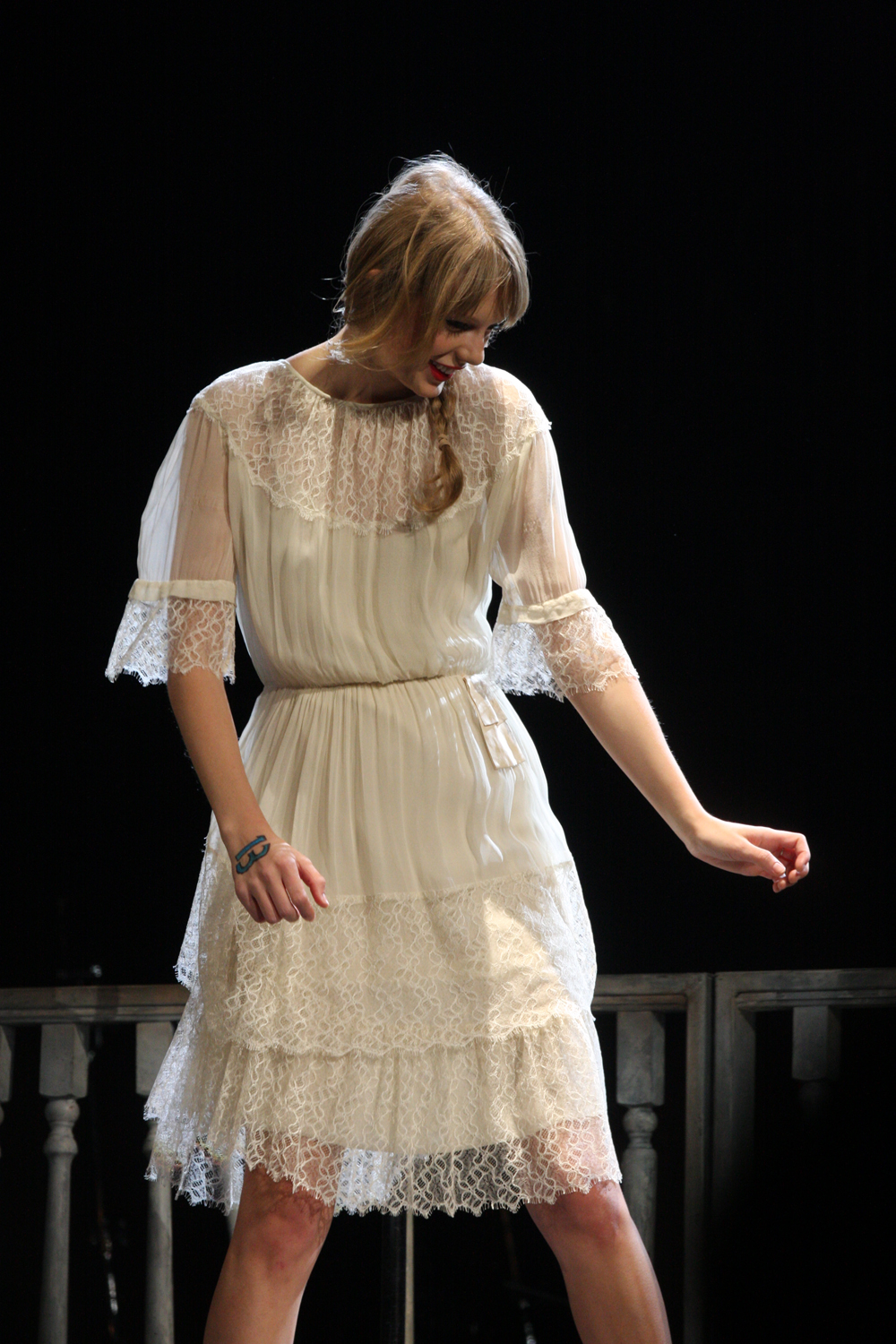 “Now it is time to celebrate Taylor Swift”

I can’t say I spend great amounts of time thinking about Taylor Swift. I mean, yes, forced exposure has left me knowing some words to some songs – I’ve got the chorus to ‘We are Never Ever Getting Back Together’ lodged in my head as I write, despite the Bombay Bicycle Club blasting from my speakers. And yes, I raged along with the rest of the internet when Lord Crazy, Kanye West stormed the stage during her award acceptance, but it was Kanye who was my main focus (as I am sure he’d be thrilled to hear). And yes, I did dislike how reported her relationships, especially when you could craft novels out of the pages of praise one-time boyfriend Harry Styles receives for shagging his way through Britain. But again, that was less about Taylor Swift as an individual and more one of my litany of complaints about mainstream media.

T Swift has just never made any great impact on my cultural radar, though her early behaviour gave little favourable impression. Whether it was the slut-shaming imagery of her videos or the outdated ‘values’ that comprised her earlier song lyrics, it was pretty clear that Swift was something of a feminist nightmare. She was the patriarchy’s perfect little princess, talented and beautiful enough to charm hearts across the world and make you forget what she was actually singing.

I’m used to male musicians throwing women under the lyrical bus. I’ve evolved an in-built filter for it. But to hear someone who looked like she ought to be singing happy-go-lucky ditties crafting slut-shaming Number Ones was a little hard to stomach.

Take 2010’s ‘Better than Revenge’. Written about the end of a relationship, Swift shames the girl she felt had ‘stolen’ her boyfriend but makes no mention of the boy who left (and possibly cheated on) her. Blasting the other woman in song is by no means a new form of inspiration for song-writers, but for the princess she was purported to be in the media, Swift was particularly brutal.

‘She’s an actress, whoa/She’s better known/For the things she does on a mattress, whoa’.

Yikes. Nothing like a little sisterly solidarity, is there? 2008’s ‘Fifteen’ is no better. Swift tells of her friend Abigail, a girl who ‘gave everything she had to a boy who changed his mind’. Was Swift lamenting all the time Abigail wasted on this unnamed boy? Or the love she felt he clearly didn’t merit?

Well… no. To quote Autostraddle’s Riese: ‘All Abigail had was her hymen.’ Yes, the greatest thing Abigail had to give away was her virginity and because she was stupid enough to lose it to someone who didn’t then marry her, Abigail was effectively less than before.

The stench of the patriarchy is almost overpowering, isn’t it?

It was clear that Taylor Swift was no feminist, yet that was exactly how she wanted it. When asked in an interview with The Daily Beast in 2012 whether she considered herself a feminist, Swift replied that she didn’t ‘really think of things as guys versus girls’ and that she had been ‘brought…up to think that if you work as hard as guys, you can go far in life’.

If there is one thing which irritates me more than women saying they don’t agree with feminism, it is these same women using woefully inaccurate descriptions of feminism to justify themselves.

Unfortunately, it is easy to see how misconceptions about feminism spread. There is so much misinformation about feminism and the rise of the internet has done nothing but propagate this. Feminism has become a dirty word and is often seen as interchangeable with the conservative-created ‘feminazi’. Evidently a desire for gender equality makes one a fascist. The more you know, I guess.

For years the mainstream media has depicted feminists solely as bra-burning man-haters. Thus women shied away from declaring themselves feminists, frustratingly so when their personal beliefs aligned perfectly with the reality of feminism. As Ellen Page said, how can we claim not to need feminism when feminism itself is seen as a bad word?

It is these rather auspicious beginnings that make Swift’s recent feminist epiphany satisfying in ways the declarations of her musical contemporaries can’t be. Though Beyoncé may have avoided labelling herself a feminist until recently, songs like ‘Bills Bills Bills’ marked her out as an independent woman from the start of her career. Nicki Minaj has never done anything but unashamedly own her sexuality. But Swift was misguided and misinformed. In a recent interview with The Guardian, the singer announced her realisation that she had ‘been taking a feminist stance all along’ despite her former anti-feminist stance. It was feminism’s negative connotations in the media, Swift said, that led her to see it as an anti-men movement and not as a push for gender equality.

By crediting her friendship with unapologetic feminist Lena Dunham for her awakening, Swift also shone a light on the importance of conversations between women in crafting our feminist philosophies. Books and blog posts written by shouty individuals like myself aren’t the only ways to educate yourselves. Get out there. Talk to each other.

Don’t for a second think that I’m claiming Taylor Swift’s feminist reveal is more important than Beyoncé’s or Nicki’s or any other famous woman’s. Just don’t. Playing women off against each other is a pathetically trite tactic used by mainstream media to fabricate drama and I want no part in it. Every famous woman that openly labels herself a feminist and challenges the traditional treatment of women in the media is a success. Young girls need to see these women, and they need to see these women celebrated.

They need to see women like Beyoncé shooting down accusations of being bossy by saying she is the boss while showing that it is possible to be successful and have a family at the same time.

They need to see Nicki Minaj being the only person to dictate her sexuality, continually emphasising the importance of education, and doing what she can to correct cis/heteronormative perspectives in our media.

They need women like Laverne Cox who remind us that our feminism needs to be intersectional and encompass all women, or else it is failing us.

But they also need to see women like Taylor Swift. Women who were misinformed but that have since overcome both society’s prejudices and their own to proudly label themselves as feminists. Swift’s feminist awakening represents the tight grip by which the patriarchy continues to hold the media, but also the successes of communication and education.

The internet falls over itself to praise famous men who announce that yeah, they’re maybe sorta pro the whole equality thing. If you don’t believe me, recent fawning over Joseph Gordon-Levitt – as much as I appreciate his acting, his was not the most important feminist declaration of 2014. Now it is time to celebrate Taylor Swift, a woman who has provided us with the material for some hilarious goat remixes but has also shown us that it is okay to grow and change and learn.