Talking Can Be Tough Sometimes

Anonymous Nightliner in Columns on 12 March, 2014. 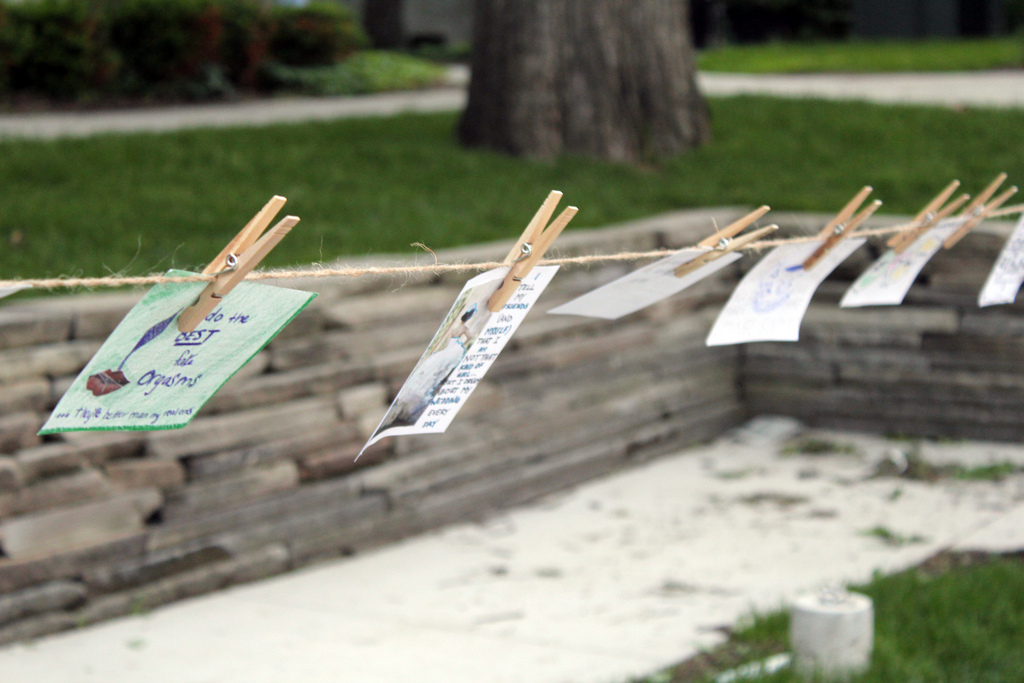 Anonymous postcards: full of those things we would like to be able to say but can’t.

Talking: it’s probably something we do every single day. Yet being a student in Durham I sometimes feel like I have the same conversations – it’s almost like a script in my head gets triggered and a response falls out of my mouth. A conversation I’m sure you’ll recognise goes something like this:

“Hey, I haven’t seen you in ages, how are you?” Accompanied by a smile and a one armed hug, probably in Tesco, or the Yum café in the Bill Bryson.

“Yeah I’m… fine thanks/stressed about my dissertation/so tired at the moment/looking forward to the end of term/any other socially acceptable answer.” For me, whilst these answers may be true, none of them are said with any real meaning.

Sometimes what I want to say in reality is: “I’m stressed about my dissertation, I keep going through phases where I just panic and think there’s no way I’m going to finish it, followed by days where I just procrastinate and I don’t get anything even vaguely productive done. I feel like I have no control over it, and regardless of whether I’ve had a productive day or not I just can’t think about anything else.” Or maybe, “I’m so tired at the moment, things at home aren’t great, my dad’s been diagnosed with depression and my mum keeps calling me saying she can’t cope, and the whole thing makes me worry, and because of this I’m worrying I’m not sleeping properly.”

The above two scenarios describe situations I’ve personally struggled with this year. When my dad was diagnosed with depression, I briefly spoke to two close friends and this was only because they realised something was wrong. The whole conversation was pretty short and I don’t think I really had the chance to explain myself or mention that I was worried about my mum, or even how much the whole situation was affecting me. This was mostly my doing; I didn’t feel like I could speak about it yet. Similarly with my dissertation I’ve spoken to friends, but it’s hard to say I’m finding this difficult especially when everyone else seems to be coping. The surprising thing is I would consider myself to be someone that talks to people. Come on, I’m a Nightline volunteer; surely I understand that it’s important to talk to people and share my feelings! Not to mention my favourite cliché: “a problem shared is a problem halved.” Yet still I’ll avoid talking until I really feel the need to.

Talking about how we’re feeling, I think, is hard. It takes a lot of courage to say “yeah, actually this is bothering me.” There seems to be a sense of shame in admitting something is wrong and I think this is especially true of Durham students. We all worked hard to get here and the high expectations we have of our work often influence the rest of our lives: we feel we should be able to handle anything and everything life cares to throw at us. In talking about something that’s affecting us, we might feel like we’re confessing a weakness and there’s always an (often unfounded) worry that people will think differently of us. But simply talking is something that is really being encouraged at the moment. You may have seen the Time to Change campaign in the media recently, which is seeking to raise awareness about mental health, but its main focus is on simply encouraging people to talk about how they’re feeling. I distinctively remember seeing adverts on tubes, and have since read a variety of inspiring blogs, often focusing on how talking to someone was hard, but it helped. We all have to start somewhere.

It’s not just mental health that people are asking us to talk about though: the It Happens Here campaign you may have seen last term was encouraging victims to speak out about sexual violence. Nightline’s Anonymous Student project took place this term for the third year in a row and, while not explicitly promoting talking, it asks students to create a postcard expressing anything they wish. The Anonymous Student Project receives a huge variety of postcards; some of the postcards are funny, some are confessions, some are thought provoking, some express an opinion and then there are some that make you wonder just how much is this person bottling up, and have they ever told anyone?

When I read these postcards and try and imagine what it must feel like to put the words on paper, I only hope that doing so was empowering and that expressing these thoughts and feelings was in some way helpful. I have so much respect and admiration for people who have found the courage to speak, or write, or express themselves in whatever way they choose to. If you’d like to read the postcards this years have been uploaded to our Facebook page www.facebook.com/durhamnightline and can also be seen on our Twitter page @durhamnightline.

At Nightline, we offer you the opportunity to speak – whether that’s on the phone, via instant message or face to face – about absolutely anything. This article has seemed to focus on “serious” issues, but we’re here to listen and provide information about anything and everything, from taxi numbers and casual chats to those more “serious” topics. We won’t judge you and anything you choose to say will remain entirely confidential. We can’t offer you advice and I can’t tell you that your situation will change because you’ve spoken to us, but there’s a chance you may feel better for sharing something.

Nightline are here every night of term from 9pm to 7am: