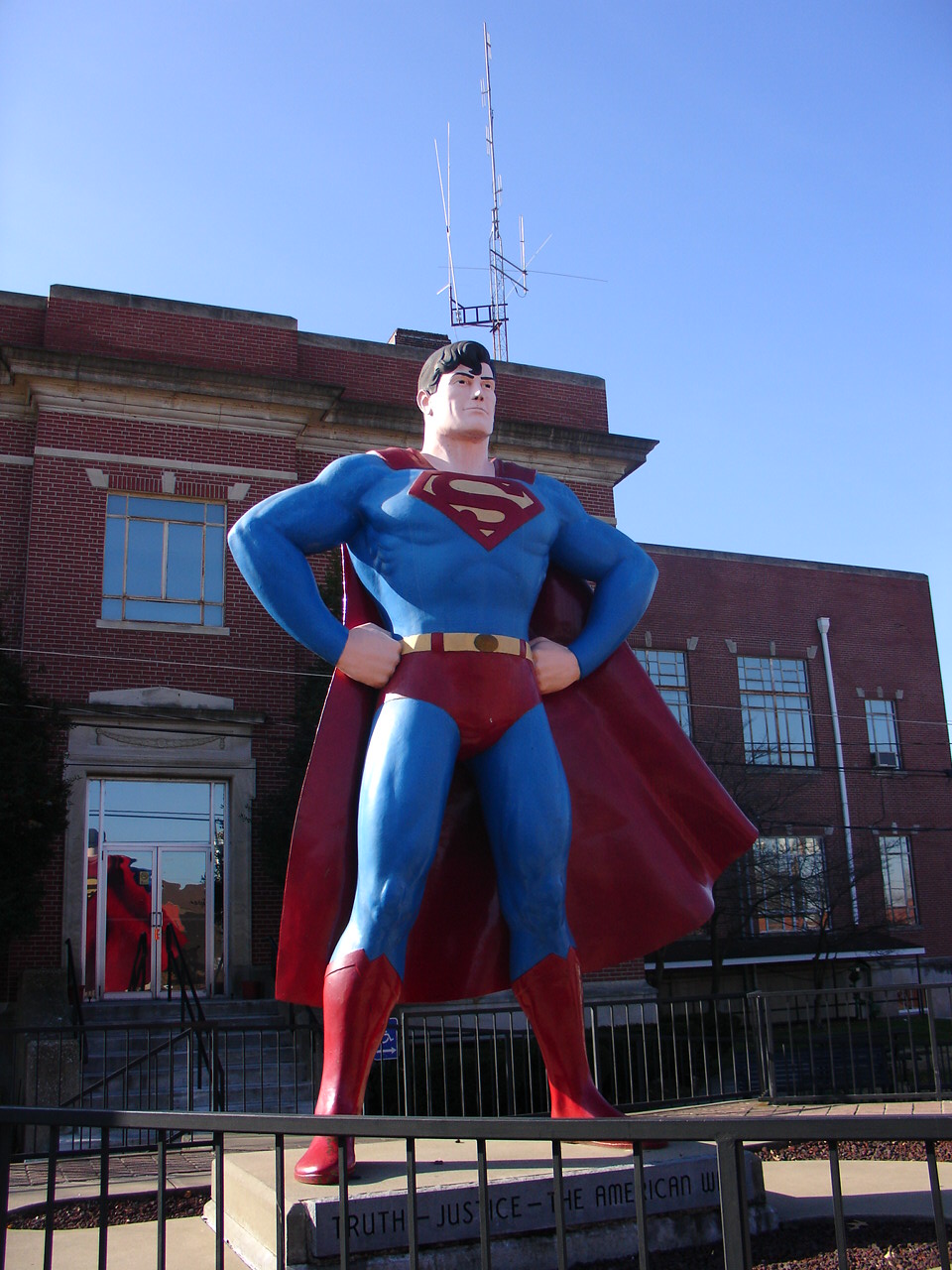 America: the only country who could have a national hero who can’t dress himself.

You may have noticed a rare burst of British sunshine of late. It may not be all that warm yet – you can’t have it all – but summer is just about on its way, and slowly but surely the thoughts of the nation are turning to ice creams and seaside road trips or, if you’re a shameless film geek like me, the summer blockbuster season. Those of us yet to discover a life and who like to spend sunny days in a darkened room with popcorn-chomping noisy teenagers await a season of action, explosions and, inevitably, superheroes. We’ve long been in the era of the comic-book adaptation, and if (again like me) you like to plan your cinematic experiences way, way in advance you may already know that Anne Hathaway will play Catwoman in the next Batman film, and Henry Cavill of The Tudors fame has been chosen to play Superman in the Man of Steel’s outing next year (funnily enough called Man of Steel).

Superman in particular has played a central role in the modern obsession with superheroes. In 1978, a vast budget, cutting-edge special effects and a brief cameo from Marlon Brando (which somehow earned him an Oscar) made the late Christopher Reeve the first bona fide big screen superhero, and every genre film yet is in its debt. By that point, though, the character was already forty years old and had long been established as one of DC Comics’ most popular characters. Ever since, resplendent in his primary-coloured spandex, flowing cape and inability to wear underwear correctly, the classic foreigner-emigrates-and-makes-good-in-America trope has made him synonymous with American culture, so much so that Captain America was designed to compete with him and never achieved the same heights.

But now he doesn’t like it. In the new edition of Action Comics, after standing silently in support of protesters at a Tehran demonstration, Superman is accused by Iran of causing an international incident. “Tired of having his actions construed as instruments of US policy”, he decides to renounce his US citizenship.

He may not get past talking about it in David Goyer’s nine-page story, but that alone is definitely a Big Thing. The staunch, incorruptible saviour who was raised on a farm in the “Bible Belt” doesn’t want to be American anymore, and for many fans that is inconceivable. The move has been broadly criticised around the world.

It’s been seen as a deliberate attempt to distance the figure from US policy, which does have a precedent – none other than Captain America denationalised himself in changing his name to Nomad in the aftermath of Watergate – but that falls down because in this case, America hasn’t actually done anything wrong (now there’s a phrase I never thought I’d write). Superman can’t act freely internationally when all of his actions reflect on a single country; he’s doing them a favour by preventing them from taking the flak for his actions. In fact, I see this as an interesting development which could prove to be a positive move. He’s the quintessential superhero, and although according to the publishers he “remains, as always, committed to his adopted home and his roots as a Kansas farm boy” he wants to shift the focus of his fight against evil to a global level: in effect, he wants to be a citizen of Earth. When we’re quite happy to refer to him as the Last Son of Krypton, an epithet which also acknowledges a planet but no nation, why is that so terrible?

Earth (apparently unlike Krypton) is a planet comprised of nation-states, and nationalism persists as the strongest level of group identity. I may spend a lot of my time defending Yorkshire (the Motherland) to other Brits as Official Greatest Place on Earth, but when asked by a foreigner I would always identify myself as British. We all have different levels on which we identify and differentiate ourselves from others – if you’re away and you meet someone else from your region, don’t you ask them whereabouts? – and the nation remains the highest: I’m always British, but rarely European. The truth is we are scared of the idea of universal global citizenship, because it identifies us on a level where nobody can be different to anybody else, and we don’t like that very much. My question is, are we justified in that?

“’Truth, justice and the American way’ – it’s not enough anymore,” Superman says, “The world is too small, too connected.” Given the role he has to play, I think he might have a point – after all, America can’t have him dragging them into more international intrigue. Were Superman real, I’d probably shake his hand. Now, if anyone wants to introduce me to Henry Cavill for this purpose, I strongly encourage you to do so.