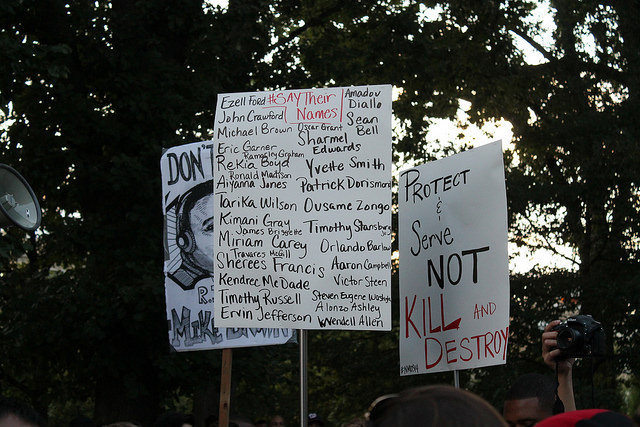 In the latest edition of Privileged People Whining When They Don’t Feel Included, white Twitter users have been replacing the hashtag #BlackLivesMatter with the ‘more inclusive’ and ‘colour blind’ #AllLivesMatter.

Can you hear my sighs from there?

I’m embarrassed by those who think such a change is appropriate. The demand that we focus on all human lives, not just black lives, is a pathetic derailing of a desperately needed conversation. Sure, the choice between two hashtags seems insignificant when measured against the recent murders of Michael Brown, Tamir Rice, and Eric Garner (among far too many others). Yet this micro-aggression reveals just how many people refuse to acknowledge, let alone tackle, the continued problem of racism in modern society.

#AllLivesMatter contributes nothing useful to the current discussion. It does not prompt us to challenge society’s racism or to question our own potential for prejudice. It does not draw attention to the unequal treatment meted out against black communities even in our self-proclaimed ‘post-racial’ Western world. It does nothing beyond demonstrating that those who use it are more concerned with their own feelings than with black lives.

As white people, we benefit from an incredible amount of privilege. We never have to remind society at large that our lives matter, yet black people are repeatedly required to do so. We never need to question whether a member of law enforcement encountering us on the street will immediately assume we are innocent or guilty. We never have to use the ‘good person’ narrative to justify grief over our deaths; because of the colour of our skin, the mainstream media will automatically represent our deaths as tragedies, regardless of our characters.

If you don’t believe me, take a look at the reporting on mass shootings in the United States. The death of white shooters is always tragic. White shooters are never just shooters: they are ‘troubled’, they are ‘pained’, they are diagnosed with a litany of mental illnesses. The world scrambles to explain and excuse their actions, as if forgetting that they have harmed and murdered innocent bystanders.

We treat white murderers better than we treat black victims because, for many, black lives are less important than white ones.

#AllLivesMatter is born of the same attitudes that fuel colour blind ideology. Many of you may have encountered racial colour blindness before: perhaps you’ve overheard someone proudly declare that they ‘don’t see race’ or read an op-ed claiming that focusing on race is counterproductive. Unfortunately, colour blindness is not as progressive as it appears. Colour blind ideology equates talking about race with racism and thus refuses to acknowledge race. This allows problems that develops specifically from racial inequality to go similarly unacknowledged.

Acknowledging race is not the problem. Talking about race, about the different experiences of ethnic groups, enables us to educate ourselves and better our society. But by trying to be colour blind, white people (I’ve yet to meet an adherent to colour blind ideology who wasn’t white) dismiss the experiences of people of colour – i.e. experiences outside of their own – because doing otherwise would require them to acknowledge race and their own privilege.

#AllLivesMatter is similarly dismissive. It ignores specific black experiences and talks over a community crying out for equal treatment, a community that cannot breathe for all the injustice it suffers. Those using #AllLivesMatter are ignoring the very real role racism has played in the recent deaths of unarmed black people at the hands of white police officers. The testimony of Darren Wilson, the Ferguson police officer who killed Michael Brown, is littered with dehumanising anti-black tropes. The Cleveland Police Department dispatcher who received the 911 call that led to 12 year old Tamir Rice’s death repeatedly asked the caller whether Rice was white or black before sending officers to investigate. #AllLivesMatter deliberately erases the racial element to these deaths and the subsequent events, and this is unacceptable.

It is also ridiculous. As many a Twitter user has pointed out, you wouldn’t take part in a charity run for cancer while holding a banner reading ‘Other Diseases Matter Too’.

Well, at least I hope you wouldn’t.

Choosing #AllLivesMatters means ignoring the reality that sparked #BlackLivesMatter; by tuning out race, those using this hashtag are derailing a much-needed conversation. That is not to say that white people cannot participate, that we must stay silently on the sidelines, for keeping quiet and failing to challenge oppression is a tacit alignment with the oppressors. But to participate we must recognise that we have no authority on racial discrimination. We must strive not to redirect the discussion or to talk over black people. Our role is to amplify black voices, not to drown them out with our own.

The recent Twitter trend, #CrimingWhileWhite, is a perfect example of useful white contributions to the discussion about racial inequality. White people related their own experiences, not in an attempt to point out that they too have problems, but to further underline the black community’s message. By describing life on the privileged side of the racial divide, they were able to further expose law enforcement’s racial discrimination with anecdotes that surprised even seasoned activists.

#AllLivesMatter is not the first example of minority-focused conversations being derailed and nor is it likely to be the last. Anyone who has ever tried to talk about feminism will be familiar with ‘not all men’, the irksome, blame-shifting response that prioritises some bloke’s feelings over women’s safety. Queer and trans activists are constantly told to include straight/cisgender people in their movement and some straight people have the audacity to claim that the A in the queer community stands for allies, not asexuals. Obviously being embraced by the rest of the world isn’t enough, they have to insert themselves into our spaces too… And if I see one more person questioning why there isn’t a straight pride, I will flip a table.

Privileged majorities pulling attention from legitimate movements by trying to force their inclusion are very dangerous. It leads to people believe that reverse racism, misandry, hetero- and cisphobia are real problems that are as harmful and entrenched as racism, sexism, homo- and transphobia. Anyone with half a brain can see this is untrue, yet derailing conversations because of the personal feelings of the majority allows these alarming attitudes to flourish.

The plight of minorities should not be obscured simply so the majority can feel better about itself. Yes, being made aware of your privilege can be uncomfortable, especially when you have never had to confront it before, but that is not an excuse to insert yourself into a conversation that is most definitely not about you.

Yes, all lives matter but the world does not need reminding of the importance of white lives. So please, if you find yourself tempted to tweet #AllLivesMatter, remember this: ‘We all bleed red but whose blood is on the streets?’