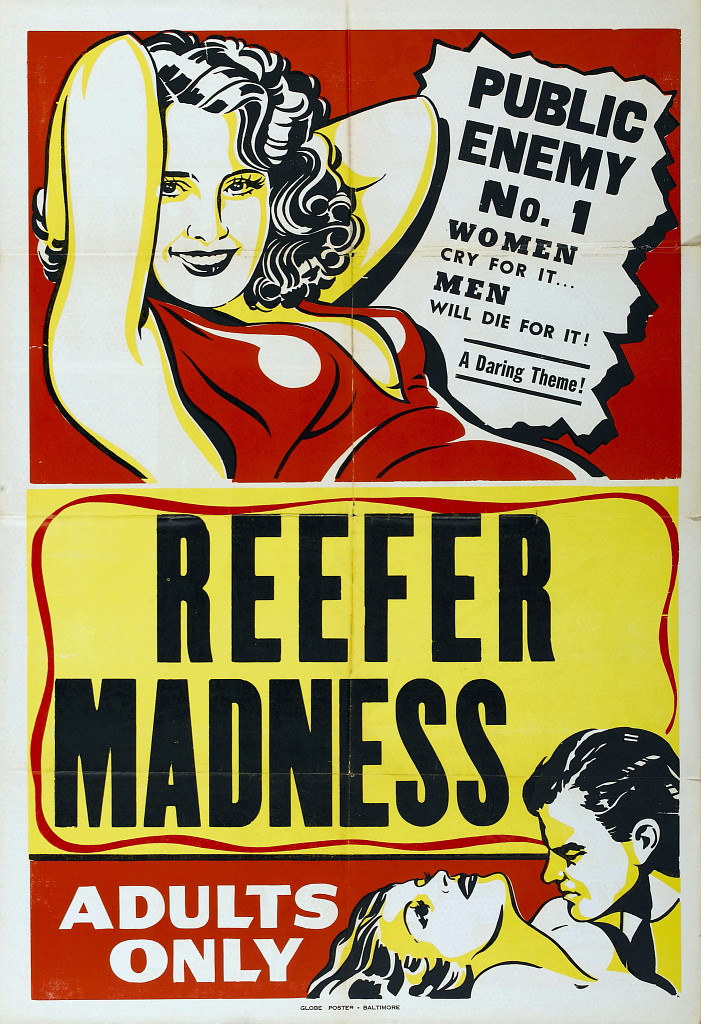 If the name wasn’t a strong enough hint, stoner films as a genre are all about using marijuana, which is often presented in a positive way and used as the main device to drive the plot forward. Stoner films tend to be comedies for obvious reasons; if your main characters are going to be stoned all the time, it limits the directions you can go. This is not high-brow humour by any stretch of the imagination; jokes tend to be purely of the gross-out variety and the more inventive the swearing, the better. It’s a genre of films that is unusually racially diverse; while mainstream comedy and romance films are most likely to have white main characters, the big names in stoner films, like Cheech Marin (Mexican American), Tommy Chong (whose father was Chinese), Kal Penn (Indian American) and John Cho (Korean), are likely to come from a variety of backgrounds. The films are often focused on male friendship and are not known for their strong female presence – women tend to be there to get naked or to nag the main characters (although a 2007 film, Smiley Face, was the first to feature a female protagonist, and it will be interesting to see if there are more to come). There is a hallucinatory wonder to stoner films; they’re not realistic, so there are no real limits to what can happen.

The genre emerged out of a 1960s counterculture, where young filmmakers and actors were experimenting increasingly with marijuana, and it began to be increasingly referenced in films. It wasn’t till the 1970s, however, that the beginnings of a movement to legalise, or at least to partially decriminalise, the use of weed emerged in the United States. Though it wasn’t acted upon by President Nixon, a National Commission on Marijuana and Drug Abuse gave a report in 1972 which blamed lack of understanding of the drug and lurid accounts for strong negative public opinion and argued that the total prohibition of use might not be constitutional. Many state laws and local regulations began to follow this impulse, beginning with Oregon in 1973 as the first state to decriminalise possession. This was despite federal laws that still saw it as a high-priority drug, which required strong criminal laws and punishments to discourage use. It was during this period of increasingly liberal attitudes to marijuana that stoner humour was given its chance to move into the mainstream in the form of Cheech Marin and Tommy Chong, who already had a series of popular comedy albums. Cheech and Chong’s films, starting with 1978’s Up in Smoke, gave us the basic stoner film format: a baked duo, often habitual slackers, set out on a specific goal, and hilarity ensues. Authority figures are usually the bad guys; parents, bosses and cops, all the people who would be understandably annoyed to find you high.

There was a drought of stoner films in the late 1980s, which corresponded to the War on Drugs becoming popularised under Reagan and the increasingly harsh regulations on marijuana’s use and trade. Thus it remained for the 1990s, which saw a spate of state laws removing criminal restrictions on the use of medicinal marijuana, for a stoner film renaissance to occur, with 90s classics like Half Baked, Dazed and Confused and The Big Lebowski. With no great backlash against weed as of yet, and the current, more lenient attitude towards its use (an October 2011 Gallup poll showed 50 percent of Americans were in favour of its legalisation), the number of stoner films keeps growing and they don’t seem likely to stop any time soon.

While not technically a stoner film, Reefer Madness does have a strong cult following among stoners. This film is available for free on YouTube and it’s a good thing too – the mind boggles at paying for anything with production qualities this bad. Reefer Madness is an American propaganda film, originally financed by a church group, about the dangers of marijuana; add about seventy years and it’s an example of unintentional comedy at its finest. In an example of cracking a nut with a sledgehammer, this film insisted that even small amounts of marijuana could make you laugh hysterically, mow down pedestrians, sleep around, shoot someone, beat someone to death, jump out a window, go insane and kill your family with an axe. In fact, the one thing marijuana seems unable to do in this film is prevent people playing the piano pitch- perfectly every time.

Harold and Kumar Get The Munchies (2004, Danny Leiner):

By the same director as another stoner classic, Dude, Where’s My Car?, this follows the epic quest of two friends who decide to go get burgers from the fast food chain White Castle, and the mishaps they experience in the attempt. The dialogue is well-written and believable, though totally filthy as par for the course. This movie is also noticeable for the memorable cameo by the ever-amazing Neil Patrick Harris as ‘Neil Patrick Harris’, a sex-obsessed, drunken and ecstasy-addled version of himself, still coasting on the fame of his childhood show. The plot of the film is about as realistic as can be expected from a stoner movie and is perfectly encapsulated in a scene where they get an escaped cheetah high and proceed to ride it through the forest.

It is directed by the brothers who brought us Fargo and No Country for Old Men. It has the ultimate slacker hero, ‘The Dude’. It is chock full of quotable scenes, most of which contain too many swearwords to include here. It has a dream sequence full of bowling imagery and valkyries. It spawned its own religion, Dudeism. Just watch it already.