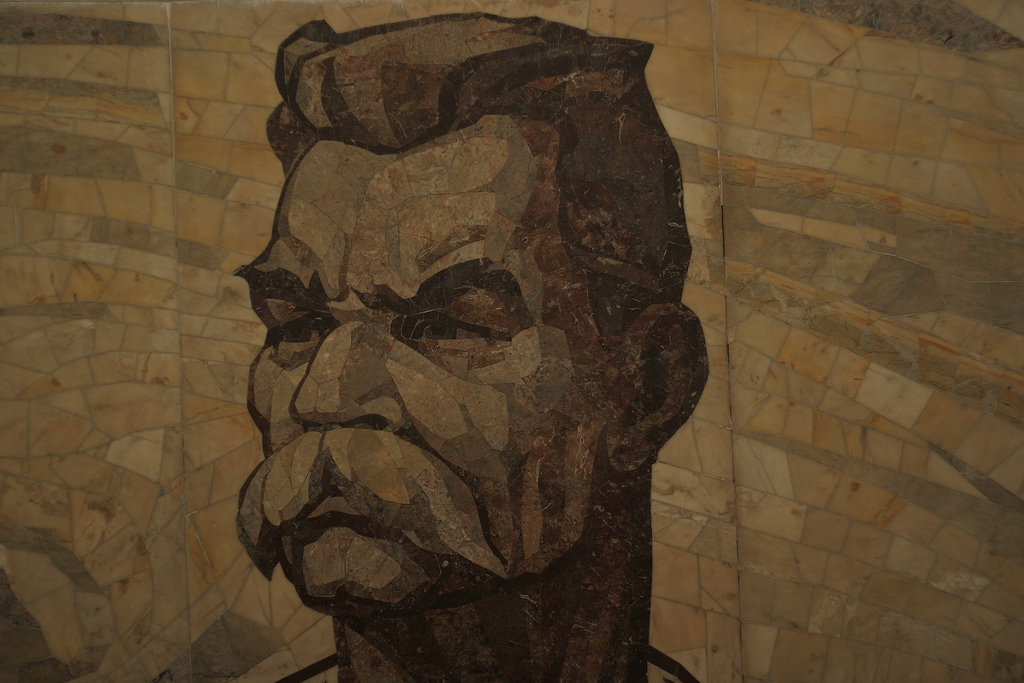 I first spotted him a couple of days after I touched down in Moscow, looking red-faced and weary as he rode the metro home; the following day I found myself stopping to stare as he paced around the Alexander Gardens, waving self-importantly to gawking tourists; later on, I had to do a double-take as he passed me in Red Square. Stalin. Yes, the Man of Steel himself, dressed in full military regalia with his fat slug of a moustache sitting triumphantly atop his lip.

Well, not exactly. Don’t worry; the Armageddon is not upon us. The infamous dictator – responsible, I need not add, for the deaths of inestimable millions in the twentieth century – is not resurrected. The real explanation is somewhat more bizarre. This is a series of middle-aged and rotund Russian men bearing a significant resemblance to the dictator and making their living as a tourist attraction, much as one might dress up as the Aladdin baddie Jafar at Disney Land – it is certainly disconcerting that it does actually require a second glance to notice that the moustache is a little too bushy and slightly askew, whilst the uniform is evidently fancy dress shop fodder. It’s all in the name of good humour, however; the only difference is that Jafar’s victims were confined to a cartoon Arabia as opposed to the uncomfortably pertinent recent history of the Soviet Union.

The public memory of Stalin has noticeably oscillated between the poles of the historical spectrum since the dictator’s death in 1953. Krushchev’s Secret Speech in 1956, which attacked Stalin’s crimes whilst being careful to preserve the spirit of Lenin and the Communist Party, initiated a period of De-Stalinization in an attempt to erase the leader from the history of the USSR. Gulag releases were authorised and the penal system reformed in kind, whilst, in 1961, Stalin’s body was removed from Lenin’s mausoleum and the ‘Hero City’ Stalingrad renamed as Volgograd. However, in the atmosphere of confusion and power struggles which followed the collapse of the Soviet Union, there was alarm in the West at an apparent inclination amongst Russians, pining for ‘strong’ leadership and fearful of their uncertain future, to rehabilitate Stalin’s memory. Portraits were restored to the walls of some homes, whilst members of the older generation encouraged an already strong cult of nostalgia, established under Brezhnev, for the patriotic, powerful, militaristic motherland of the 1940s. Indeed, significant media attention was given to the publication of a Russian school history textbook which appeared to omit mention of Stalin’s crimes and focused on his role in the development of the USSR’s industrial, economic and military prowess.

However, this latest trend seems like something new altogether. It is certainly not an erasure of Stalin from the history of Russia; on the contrary, it is almost a celebration of the dictator as a symbol of the country, much as the image of the Roman soldier immediately evokes a sense of Italy, Rome and the Colosseum. Nonetheless, the costume-clad men are incontrovertibly caricatures, mocking the man who ruled with an iron fist for twenty-four years. It is the confusion inherent in this image which seems most disconcerting; whether actively erasing, or actively promoting, Stalin’s memory, debate is inevitably generated and his crimes, along with relevant problems of leadership cults and dictatorial power, are indelibly at the forefront of politics and the mind. Yet, if the Russian people are willing to flaunt a caricature of Stalin to tourists as a symbol of their country, then what does this say for their attitude to him, and to Russia?

It seems that what may innocently seem to be a few entrepreneurial men making a quick rouble from more than willing tourists is, in fact, a warning sign that Russia’s public memory is still far from reconciled with the lessons of its turbulent, authoritarian past. We are left only to contemplate what could be the seismic effects of this evolving collective consciousness on the nation of 140 million – and, when projected onto the infamously unorthodox yet unquestionably influential upper echelons, what this could mean for the bigger picture.