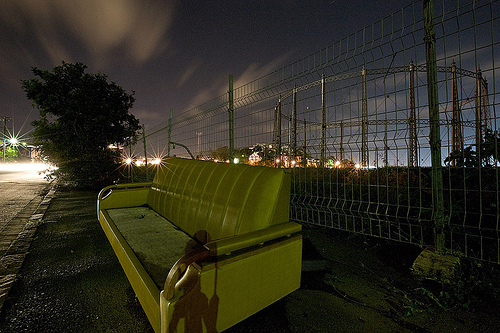 A green sofa on its year abroad

My first coherent thought upon arriving in France was “I must put on my yellow hat”.

This was hardly a promising beginning in a land where fashion is inarguably more important than in pyjamas-in-Tesco Britain, but I was suffering from a lack of sleep and food (I’d flown from America), and my first thought was to get out of the airport and into a house. Although the details in my somnolent mind were rather hazy, I knew that somehow, a yellow hat would get me there.

Backtrack a week. I was lounging on my sofa at home, slowly working myself into a panicked frenzy in front of my computer screen. In seven days I would land in France, completely SDF, as we say. ‘Sans Domicile Fixe’: a rather PC way of saying ‘homeless’. House-hunting from my sofa was about as effective as any other kind of hunting from a sofa, so I had little to do but wait until I touched ground in France and could see every growing stain of mould, lack of heating and belligerent squatter I was expecting to find in my budget-range of French accommodation.

However, until my very own veritable Versailles materialised, I still needed to find a roof, preferably accompanied by at least three walls, under which to reside in the meantime. Which brings me to my very favourite website.

Couchsurfing.org had rescued me this summer, where I was working in Italy as an au pair for the bambini from hell. One day a week my mission was to be as far away from their screams as possible, and so I found people on Couchsurfing willing to meet up for a pistachio gelato, wander into a cave with me (even many of my friends at Durham draw the line here) or, y’know, introduce me to twenty of their closest friends over a huge dinner. Through other Couchsurfers I met an unbelievably kind Anglo-Italian family who hosted me during my later travels, and ended up offering me and my friend the use of their apartment in Rome for a week. If anyone has travelled to Rome, you will be aware that the offer of accommodation there is somewhat equivalent to someone casually offering you their kidney. So needless to say, I liked this website.

Still, the idea of requesting to stay at the home of a complete stranger in a new country is not without its worries. It still could be filed under ‘Meeting Strangers on the Internet’, which in turn tends to get filed right under ‘Accepting Sweets from Strangers in Unmarked White Vans’ in terms of sensible conduct. I suppose I already crossed that line when I first stuck my thumb out on a road and commenced hitch-hiking all over the place.

Back to my sofa. My actual sofa, that is, not one I found on the Internet. I commenced the difficult task of selecting the first faces I would see in France. Searching couches near where I planned to live, I scanned the myriad photos and profiles, which included a disproportionate amount of men living alone. After a little thought, I settled on a young family of four smiling into the camera. I decided I would feel better if I had something to offer my hosts, and since I have quite a lot of experience with kids, I envisioned offering babysitting services or English lessons. Also, statistically, smiling young parents are less likely to be axe-murderers.

Within a few minutes of arriving, I knew my instincts had been right. The family was easy-going, funny, and understanding. Upon arrival, I had my own room. I had my first babysitting gig the second day I stayed, and my own key the third.

The fifth day, the mother of the family said that we needed to talk. I’ve never been dumped before, but I gathered my ‘sorry’s, stiffened my upper lip and was prepared to take it like a Brit. Instead, to my complete surprise, she said she’d like to invite me to live with her family. Instead of dumping me, I was moving in. We negotiated the terms and settled almost worryingly quickly into living together.

Couchsurfing had outdone itself. It not only found me a temporary place to stay, it also found me my permanent accommodation. It’s not like the website has magical powers. It just allows ordinary people to be kind without (at least in 99% of cases) being too creepy about it.