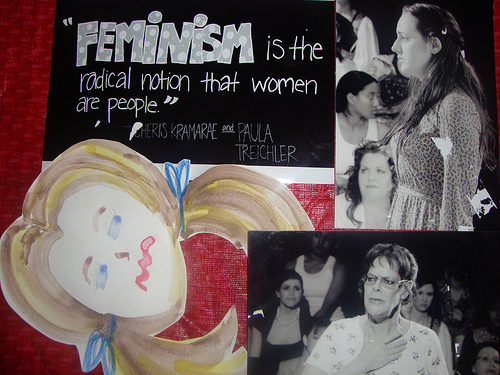 What’s your perception of feminism?

I think that it’s safe to assume that for many people reading this column, “feminism” will automatically appear as a bit of a dirty word. Increasingly, I’ve noticed that just saying it can be a trigger for losing people’s attention, and on occasion, respect for what you’re talking about. That’s not to say that this column is an apology for feminism; instead it’s an acknowledgement of the seemingly impenetrable dimension that it has taken on. The word itself seems to have been displaced from the concept that it actually describes, so that what we’re left with is a carapace of a word comprised of stereotyping and close-up mug shots of burned bras. There’s an unspoken sense of a lack of credibility lingering in the air. Increasingly, outside of academic discussion, it’s hard to discuss feminism without also encountering what seems to be its mirage, made up of a few militant remnants of second-wave feminism. This is, in itself, no revolutionary statement, but it is something that needs to be scrutinised and made into less of a taboo if issues of gender and sex are ever to be taken seriously in contemporary mainstream discussion. The fact that feminism is so often perceived as being a negative, almost superfluous concept is worrying, especially in 2010 when the full-time pay gap between men and women is still at 16.4% and the rape conviction rate in England and Wales is a shocking 5.29% (statistics from the Fawcett Society).

Often, this sense of “feminism” as a dirty word seems to stem from male perceptions, but, more increasingly, from many women too. Obviously, such claims are always going to be based on anecdotal and personal experience, but unless we consider such experiences, we will only ever be able to view feminism from a theoretical, abstract, and thus alienating perspective. Perhaps it is this sense of feminism as alienating that most prevails; a lucid evaluation of what “feminism” equates to is rarely considered before the concept is dismissed as irrelevant. Indeed, the term “feminism” seems to have almost acquired a mythical status in that it gestures towards something stagnant that, over time, has been revealed for the fallacy it actually is.

If all of this sounds somewhat abstract, that’s because a negative reaction to feminism relies on an abstract and uninformed conception of it. Ultimately, first- and second-wave feminism has not brought about significant negative consequences for women or men. If greater awareness of equality, increased access to contraception, and enfranchisement for millions of women had repressive side effects on men, for example, then perhaps a negative response would be acceptable. However, feminism is continually relegated to the “extremist” corner; if anti-racist campaigners were pigeon-holed in such a way there would surely be a national outrage. A simple definition of feminism is: “a movement for social, cultural, political and economic equality for men and women. It is a campaign against gender inequalities and it strives for equal rights for women.” It would appear difficult to claim that such a cause is any more extreme than demanding equal rights for any minority or oppressed group; that furthering awareness of current gender inequalities is so often perceived as superfluous or pedantic is not only unfair, but highly concerning for future generations of young girls, many of whom are currently being brought up to believe that Bratz and Cheryl Cole are the pinnacle of female achievement.

That’s not to say that “feminism” must be bubble-wrapped, so that no wry jokes can ever be made about it without accusations of discrimination setting in; most serious issues are excellent targets for comedy, as it makes them more manageable, and presents us with the illusion of control over them. However, the negative reactions and “jokes” about belonging to a feminist group that I have personally encountered in Durham, supposedly one of the best universities in the country, seem to project this dismissal of gender issues onto a whole new scale. Perhaps, the bad feeling demonstrated towards feminism is actually an indication of people’s fear of approaching the issue. Its place in the 21st century seems particularly unstable and insecure. Many people believe that first and second wave feminism have landed us in a more or less equal state; post-feminists might claim that there is little need for UK-based feminist groups when so many improvements have already been made. However, gender inequality in 2010 seems to manifest itself in a much more insidious fashion; there’s supposed to be an irony in every negative gender stereotype or comment (“we’ve achieved equality now, can’t you take a joke?”) which seems to almost preclude genuine feminist discussion in many everyday situations.

Siren, Durham University’s Feminist Society, is a relatively new group which aims to dispel these negative and uninformed views about the movement. We hold weekly meetings in which we discuss relevant issues and plan events/campaigns. We welcome anyone who is interested in gender equality issues to attend these meetings; you don’t need to consider yourself a “staunch feminist”, and you don’t need to be a woman! Feminism isn’t about bringing down men, an obvious enough statement it might seem, but apparently still a widely-held misconception. Instead, we aim to promote positive action and discussion that can help to bulldoze the big fat elephant in the room, the thing that people are really afraid to talk about: which obstacles and preconceptions about gender still impede the lives of modern women, and how we can start to change this and make the issue more rooted in the current public consciousness.