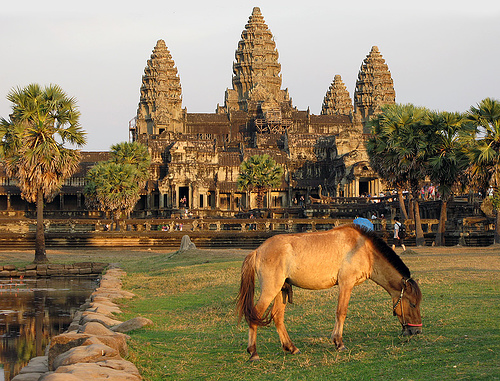 With its beautiful beaches, tropical climate and a rich cultural heritage, Cambodia is a tourist’s dream. Behind the veneer of this popular gap year destination, however, lies the dark underworld of human, and particularly child, sex trafficking. Sex tourism has become a big business in various places across the world, with Amsterdam and Bangkok immediately springing to mind. In countries such as Cambodia, however, the sex industry is based on paedophilia, sexual slavery, and horrific violence. Sex trafficking is defined as a “modern-day form of slavery in which a commercial sex act is induced by force, fraud, or coercion, or in which the person induced to perform such an act is under the age of 18 years”[1]; a far cry from the windows of the Red Light District of Amsterdam.

The statistics on this topic involve endless shocking figures that make it difficult to even begin to imagine the extent of this problem. Eight hundred thousand women worldwide are estimated to have been sold or abducted into slavery.[2] One hundred thousand of these cases are believed to be in Cambodia.[3] Thirty-five per cent of prostitutes in Cambodia are under the age of eighteen; many are aged twelve or thirteen and in some cases found to be as young as four.[4] Fifty-eight per cent of Cambodian sex workers have been or were sold into prostitution.[5] Between forty and fifty per cent are HIV positive.[6] The list goes on. Looking behind these statistics, we also see the heart-breaking stories of the individual victims. All born into poverty, we can see the range of hopeless situations that these girls (it is a predominantly female “market” in Cambodia) ended up in. Many were sold by parents or relatives in order to pay off debts; others were tricked by traffickers posing as employment agencies; others saw no other way to get money in order to save their family. Then followed the process of “debt bondage”. The owners of the girls would claim that they were in debt to them, firstly from the money paid to their families and then from “bills” for the girls’ food, clothing and accommodation. The girls would then have to work for their owner until this debt had been paid off, making it very difficult to escape. Furthermore, most of the stories involve unprecedented violence towards the girls who are effectively beaten and sometimes drugged into submission.

So what is the Cambodian government doing about this problem? Recently, due to the AIDS epidemic and the threat of trade sanctions, the government has been coerced into strengthening its response to this issue and is mid-way through a Five Year Plan of Action Against Sexual Exploitation of Children. Like in most developing countries, the implementation of such strategies faces many brick walls through ingrained attitudes, poverty, and corruption. Despite campaigns against abuse and trafficking, women are still regarded as second-class citizens in Cambodia.

Research into the Cambodian media has shown that 80% of drawings featuring women are obscene and more than 50% depict women as sex objects. This, contrasted with the fact that women are only the subject of 7%[7] of these stories, shows that a lot needs to be done in order to change people’s attitudes. The propensity of the Cambodian government is to blame foreign sex tourists, who certainly do create a serious issue that needs to be dealt with. However, a large proportion of customers are Cambodian, meaning that it is both an internal and external issue. Corruption, however, is the largest obstacle facing those trying to end trafficking. While government raids on red light districts are becoming more common, they rarely result in any prosecutions. Pimps are either forewarned or protected by those in government. The Governor of Kok Kong province, for example, banned human rights investigators who raided a trafficking ring without his permission. Rescuing the women is equally difficult, as they are trapped by a whole network, meaning that local authorities and whole villages will prevent them from escaping.

Of course even if the government was able to close down these brothels and break up the trafficking rings, the major problems would still not be solved. In a country where 35% of the people live below the poverty line and 45% of women are illiterate,[8] women’s prospects are very low. As a result, most women who manage to escape from servitude have no choice but to remain as a prostitute in order to survive. More practical solutions are needed in order to combat this vicious cycle of poverty. Organisations such as the “Cambodian Women’s Crisis Center” (CWCC) have set up places where women can stay, and also offer training courses in order that they can learn skills to support themselves in the future. Due to the scale of the problem, however, there is a desperate need for more charities like this. As in most developing countries, issues such as this are extremely complex and interlinked with many other problems of the country. It is important that those most vulnerable in society are not forgotten and that there is a continual pressure on the Cambodian government to address the problem and implement the mechanisms necessary to support those who need it most.

If you are interested in finding out more about sex trafficking in Cambodia and how you can help rebuild victims’ lives, Siren, SIFE (Students in Free Enterprise) and DUDAS (Durham University Development Abroad Society) are holding a workshop. After watching a documentary, we will be thinking of ideas and coming up with a plan for projects to create supportive new livelihoods for such women. Come along on Thursday 25th November to the DSU Activities Room from 7.30pm onwards if you’d like to help!