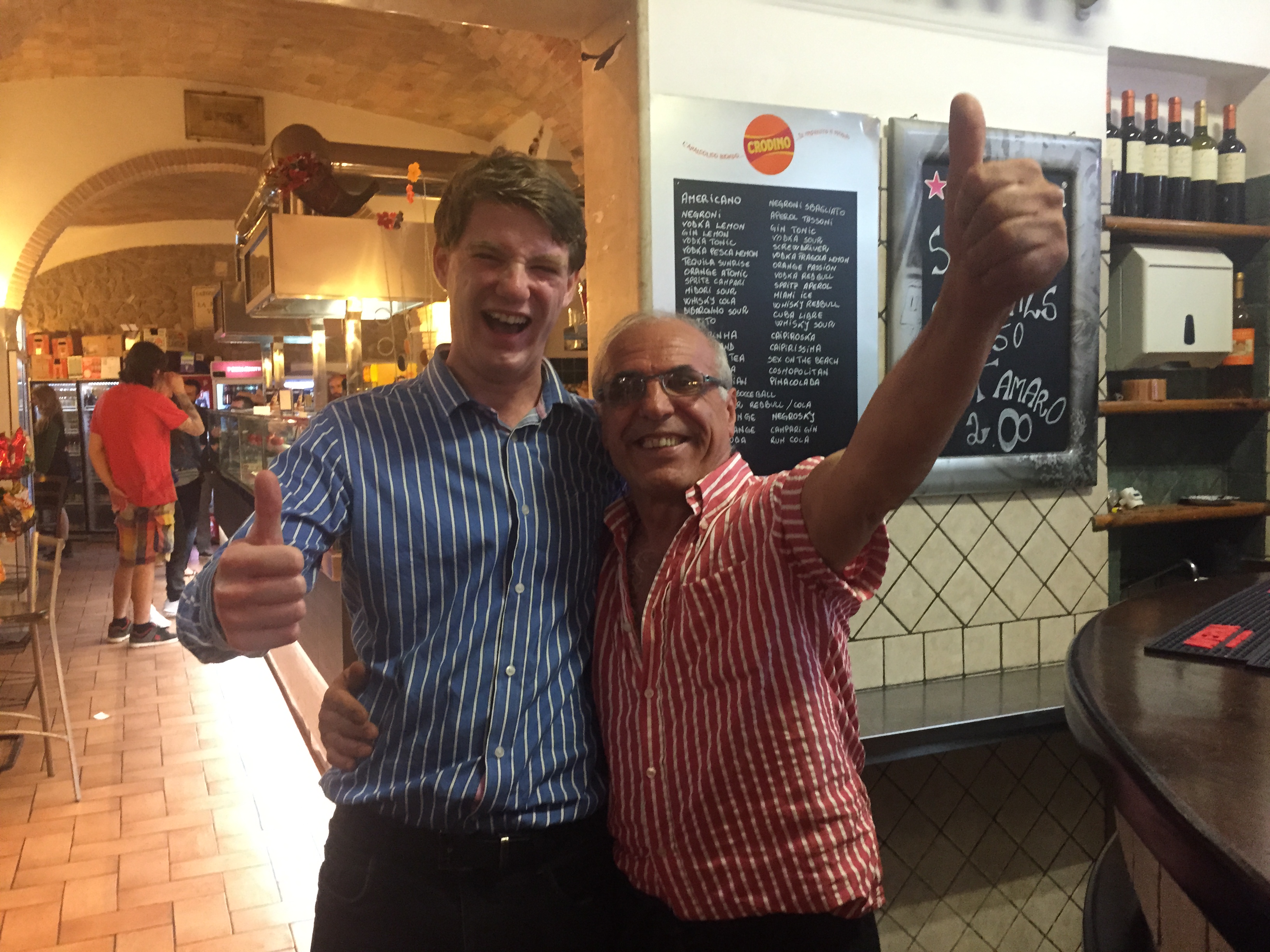 Last week I talked about the debauched hellhole that is San Lorenzo: about its stoners, outdoor raves, and feisty feminists. However, what I failed to mention was that, just down the road, is one of Rome’s best-loved cocktail bars. Sat a little way away from the ensuing bedlam of ‘Marijuana Bay’, the bar attracts people who’d rather abstain from illegal and potentially dangerous substances, instead opting for alcohol as a more conventional means for getting hammered. Sounds like my kind of bar.

On the face of it, ‘La Piazzetta’ is actually fairly underwhelming: stainless steel tables and chairs, comically large wine bottles and ‘the barman is always right’ signs hang above the bar, and a single speaker churns out a rather confusing combination of pop music and Neopolitan folk. Slightly irritatingly, though, every third song always seems to be Bastille’s ‘Pompeii’, which incidentally is the only song worse than the actual event it describes; I would gladly hurl myself into the path of a pyroclastic flow if it meant I never had to hear Bastille again. Indeed, I think I’d have Pompeii at my funeral, just to assure people that there are things worse than death. I mean, ‘eh oh’ doesn’t sound like the central lick to a pop song – it sounds like a Geordie greeting.

What makes this place great, though, is the guy who runs the place, called Renato, who is a man of both incalculable age and inebriation. You know those people who keep drinking, just to avoid the hangover? Well, going by that rationale, I’d believe you if you told me he hadn’t experienced a hangover in 20 years. I really get the impression that, not only could he not remember a time not running this bar, but he couldn’t even remember what he was doing 5 seconds ago. You would arrive at the bar and inevitably be kept waiting a couple of minutes, as he finished talking with a more well-acquainted customer, or went to the toilet, or maybe finished doing something with his fingernails.

Perhaps similar to waking from a vivid dream, he would gradually return to reality, it dawning on him that there were customers waiting and ready to give him money (which he could later convert into more alcohol). He would then hobble over to the bar, and look at us in inquisitive silence, leaning in extra attentively as if to compensate for his previous disregard for customer service, his limbs creaking like a badly oiled door. You could always tell he was struggling to concentrate, as his eyes swam from face to face, like a fish in Marmite.

Then, with my order placed (he’d only take one order at a time), off he’d go, in a faltering – yet purposeful – totter between spirit bottles and work surfaces, as he accumulated all the instruments required to make a single mojito. All the while he would always whistle or sing some little tune to himself, the name of which had probably been lost in the alcohol-soaked sands of time. One could say that this man made the strongest cocktails in the world, if they were but cocktails. Indeed, never using measuring tools – presumably in his addled state regarding them as something only ‘pinko commies’ or the like would use – he would always smash a bunch of ice cubes in a glass, before grabbing the nearest bottle of a satisfactorily clear liquid and splashing in an estimate of a generous quantity known only to him. I really don’t know how much he actually intends to put in – remember this, guy is off his face – but I would guess he’s giving me between 4 and 5 shots of straight spirits. He then grabs the sugar and puts in about two tablespoons of the stuff – far too much, but if it masks the taste of the white rum, that’s fine by me – before almost-carefully placing a lime on the edge of the glass, along with some mint.

Satisfied, he slowly picks up the beverage, toxic with ethanol, and hands it to me, his face a mixture between proud and physically relieved, like that of a six year-old boy who’s just let off a silent but deadly fart and knows everyone in the room will smell it in about 7 seconds. “How much?” He leans in, visibly taken aback that I had something more to say to him. “How much?” I repeat, louder this time. “Oh, €3.50.” These are literally the only words he’s ever said to me. But hang on – €3.50 for 5 shots in cocktail format?! Surely he is mistaken?! But he’s already taken my money, putting it straight into his pocket – after all, cash tills are for pinko commies – and has turned to the next of my friends. Once again, he leans in, as if trying to read a message in tiny font on their eyeballs. And so the cycle continues, until either we or him give up. My year here is nearly over, and we have yet to get the better of him.