S is for Spoilers 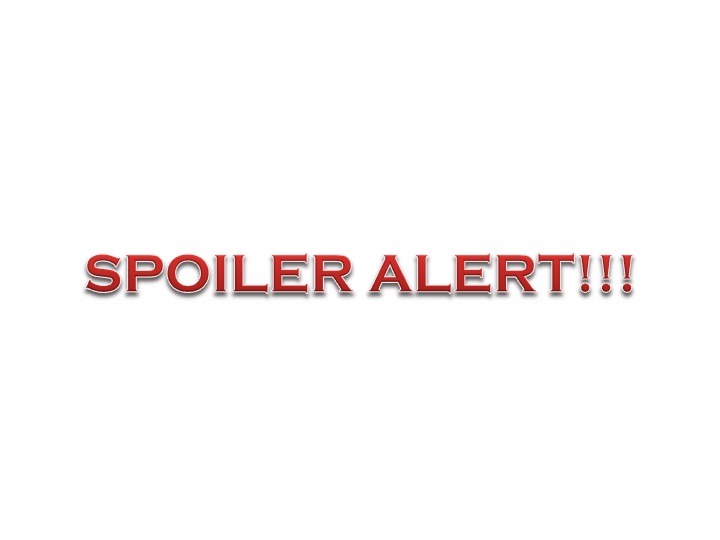 “Spoiler: An element of a disseminated summary or description of any piece of fiction that reveals any plot elements which threaten to give away important details concerning the turn of events of a dramatic episode.”

I only got around to watching Interstellar a while ago. All of the hullabaloo about it actually took me off from watching it and I was inexplicably busy, so I ended up finally seeing that movie on VOD. With my mother. Who had already seen it before. Being the wuss that I am, I continually asked her to tell me who, if any, dies, when that aforementioned character dies, and how that poor soul meets his or her untimely end. I am not good with surprises. I made it perfectly clear – mother, please tell me some of the details, but don’t tell me everything about the film.

She ended up explaining the most important detail that happens when I was barely halfway through the film. I was very much amused. My mother, on the other hand, was annoyed at me for making such a fuss. She thought that she was doing what she told me to do.

The movie was ruined for me – well, not really. I still managed to enjoy myself. Relatively. But to be honest, I’m not that bad with spoilers. It’s just that the film was very long and I’m not a big fan of films that are set in space; they make me feel small, insignificant, and quite noticeably afraid of what is going to happen in the future. However, that’s a thought that will have to be explained another day.

When I was younger and read more books than I do now, I had this small habit. I would get the book I wanted to read, read the blurb, skim the first few pages, flip back to the end of the book and read the last one or two pages. After reading the ending and being satisfied with the knowledge that I knew what was going to happen, I would turn back to the beginning and get on with the story. Now that I think about it, it seems a rather stupid way to go around reading a book. Why bother reading something if you already know how it will end?

In a way it made me feel as if I were in control, in an odd sense. Although I wasn’t the person who wrote the book and was actually in control of the characters and, quite possibly, of the readers; just by knowing how the book would end gave me a sense of relief. Relief in the thought that the eponymous character would not die, relief in the thought that nothing too dramatic would happen, relief in the thought that I would not be met with a sudden plot twist in the middle of the novel. Of course, reading the last few pages did not help too much – sometimes all I got out of reading those pages was the name of a character that would appear somewhere between the middle and the end. It didn’t really help me understand the book better, but at least I got to know a name of a character that I hadn’t met yet.

Am I the weird one here? Should I be one of the many people who believe that spoilers, quite literally, “spoil” the plot of a story/film/game/whatever?

I don’t really think so. According to an experimental study in the University of California, San Diego, it was proved that spoilers can actually “enhance enjoyment” rather than ruin it.[1] In this experiment, 30 subjects were given 12 short stories that could be divided into three groups: ironic-twist, mystery, and literary. They were given two versions of the story: one that had a spoiler paragraph before the story, and one that had that spoiler paragraph inside the story as if it were part of it. The subjects of that experiment were said to have enjoyed the “spoiler” versions of the stories – a result that may seem surprising to some. There are no particular answers that explain this result in its entirety, but the researchers came up with one possible answer: the plot is overrated. People tend to put so much emphasis on the plot itself that they tend to overlook the good writing. It isn’t so much about what happens, how it is written still manages to make people happy.

Maybe that’s why, although I already knew how it would end, I still enjoyed Interstellar. Maybe that’s why I always had this fixation with reading the ending before the beginning.

Spoilers aren’t necessarily a bad thing. They give you time to prepare for whatever may happen to that fictional character you may or may not get emotionally invested in. There’s nothing wrong with that, is there?