Returning to the Magic of Durham from Mexico 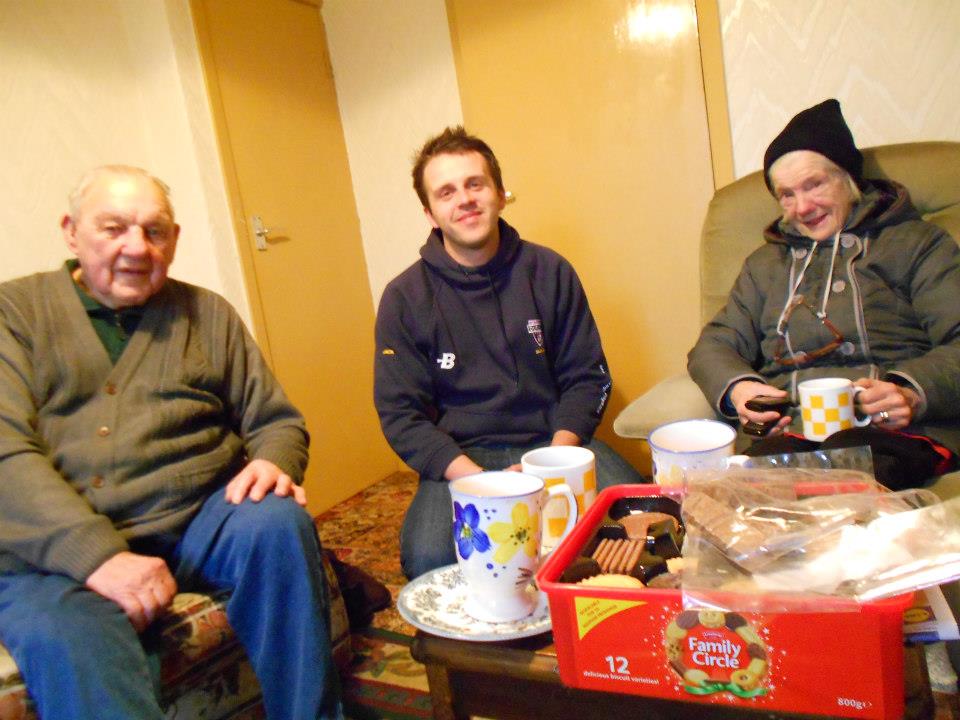 The author with his still-vibrant neighbour George, and the latter’s lady-friend Margaret

I moved to Mexico City three years ago now and this Christmas I had the opportunity to travel back to the UK to see my family with my Mexican partner. It’s always interesting to return, especially with a new set of eyes. Would things have changed? Of course, but having grown up a little bit in the last few years, what would my experience of a return to the North East be like?

Well, the first thing I noticed was the huge hike in train prices. My family live in Northumberland so when we left for the day by train I was a little shocked that the 30 minute journey now costs twenty pounds return for two people. Of course I don’t have my student rail card now but it was a big change from the cost of a single metro ticket in Mexico at 15p!

We arrived at the station though, safe and sound, and I was as impressed as ever with the beautiful view of the cathedral and castle from the river. Even on a cold grey December day, the sight is spectacular. As we walked down North Road, many of the old bars and shops remain just with different names. One exciting new edition being the Asian food shop selling spicy sauces and home cooked noodles. We bought a hot sauce ready for Christmas day for my girlfriend and we carried on, past the Fighting Cocks pub and up to the market place. I wonder if that pub is still considered as a locals’ pub and off limits to students? Me and my pals went in there one day, shaking a little to think the place a fortress that we must be kept out of at all costs, only to find friendly people, cheap beers and good service.

One place I was keen to visit on this trip was the new People’s Bookshop opened on Saddler’s Yard, just off Saddler Street to meet Ben Sellers, the owner, whom I knew from my time as a young trade union organiser. It’s a beautiful little shop up some winding stairs and is filled with poetry and literature, local history and people’s politics from around the world. Ben hosts several student literary and political events there, definitely worth checking out if you’re passing by.

Next stop took me to my old neighbour’s house on Whinney Hill. I hadn’t seen him since I left and back then he was pushing 85 so I was a little worried that he might not be around. He’d put me up for a month one summer at the end of university whilst I worked in Durham without a place to live. He’d looked after me well, made me tea and provided me with endless amounts of Kit Kats and homemade bread and jam. He’s lived in Durham all his life working as miner before moving on to the electric board. On our regular walks together when I was a student he would tell me about all of the old buildings and what they had been in an era long since lost. I think he must have done the wiring for about half of Durham city centre over the years!

Just after I graduated I introduced him to a Turkish friend whom I mentioned to George is from Istanbul. He seemed happy to meet her and then asked “which part of Sunderland is that then?” Wonderful!

As we walked up Whinney Hill past St. Cuthbert’s Society, I saw an old man carrying several bags of shopping and power walking up the hill. I thought it was him but at 87 and with a lady walking beside, I thought “naaah, couldn’t be”. I shouted his name and as he turned round he gave me a big smile and introduced me to the lady he was with who I had assumed was his sister (he had been widowed long before I had gotten to know him). It turned out that in the last three years, he had been remarried to Margaret and had begun to travel around the UK and even tasting new foods outside of pies and bacon sandwiches. When I had met him previously he had turned his nose up at pasta and rice and never seemed to travel further than to Bishop Auckland. Now it seemed that falling in love had given him a new lease of life and a twinkle in his eye. This was one of the highlights of my whole Christmas.

George had to go to the market in Crook, so we left and for the rest of the stay just walked around visiting the old Palace Green and cathedral and remembered my graduation and some wonderful summers spent with wine and cheese sitting on the grass. I think every time I visit Durham in the future I’ll have a special feeling of the three excellent years spent there. It was impressive to return and find that while many things were very similar, life had moved on and the city itself retains its magic, for me, more now than ever before.

If you’re a Durham student, why not get to know your neighbours and the locals that live close to you. You never know, you might just make a friend for life.

For more information on the People’s Bookshop please go to: http://www.peoplesbookshop.co.uk/