Informed observers in 1517 would have attributed little significance to Martin Luther’s criticisms of the Catholic Church. Heretics had come before, heretics would come again. Indeed, historians stress how un-unique the reformer was. Luther himself even professed surprise at his impact on the Christendom he unintentionally dealt a critical blow. 1517 is a crucial year less via seeing novel ideas incompatible with the status quo emerging, so much as by virtue of old ideas permeating into wider regions of society as facilitated by the new printing press. 2008, like 1517 was nothing unique – major economic crashes are nothing new – but in its wider context undermined the basis of the modern political order.

Our Europe is not Luther’s Europe. Underpinning this difference is the rise of capitalism and democracy. The political consequence has been a shift of foci. Medieval and early modern government concerned itself with strengthening the ruling family with lavish displays of power and after 1517 consolidating its confessional faith; capitalist-democratic governments from around 1700 have been concerned with rationally representing itself in in regular elections and maintaining confidence in the economy. Robert Walpole, first English prime minister, noted a change of faith in parliament from rhetoric to statistics.

Contemporary European integration too is based on capitalist economics. Typically, European systems of order were destined for failure. The Barbarians opposed the Roman Emperors’ monolithic power, Charlemagne’s restored empire of 800 collapsed as quickly as it rose, the supremacy of the Catholic church was violently challenged the moment social developments allowed it. Integration under what would become the European Union was an act of unification which was possible less due to a cultural tendency to unity, so much as an order agreed upon to counter prospects of something far worse: total subjugation under one, single, Communist authority.

This culture of aversion to integration took centre stage after 2008 when the capitalist basis of western order was undermined in an age of networks which holds its leaders to high scrutiny: hence a revived appeal of Marxism. The Brexit debate is an obvious symptom of this culture being brought to bear on our modern hierarchies. The lesson we can take from the Reformation, seeing a plethora of local independent challenges to authority, is that western authority cannot be taken for granted against a cultural distaste for authority.

Authority, in a networked age, cannot monopolise opinion and is thus undermined. The issue is legitimacy. When people become exposed to the reality of their submission, and aware of its fault lines as they were in 2008, it is natural to ask, ‘why should I consent to such subjugation?’. This question engendered the splintering of early modern Christendom. Reformation states needed assurance that they were protected from evil Popish Plots or Protestant heresy. If opinion could not be monopolised, it could be tamed. Prudent monarchs concerned with their image maintained confidence in their subjects. The Tudors or Louis XIV found greater success than monarchs less attentive to self-representation; they were destined not for greatness but the executioner’s axe, as Charles I was violently taught. 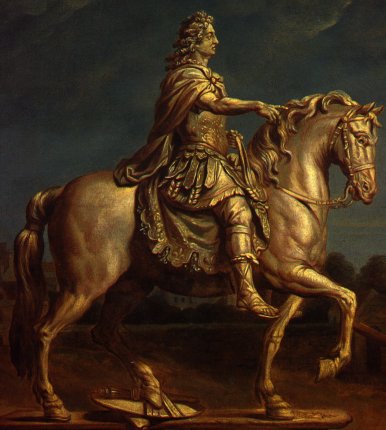 2008 and after issued in something of a  reversal of the process Walpole observed in parliament; rhetoric has become important as people have lost confidence in statistics. Some argue that Trump should cease denying Russian involvement in the 2016 election; he has got the power he wanted so has nothing to lose from joining the criticism. They misunderstand the American president. Trump wields power not purely by virtue of his legal mandate, but significantly through his rhetorical and symbolic action. As Louis XIV’s legitimacy was concerned with presenting himself as the only possible authority around which the world naturally revolves, the Sun King, steel-headed lambasting of opponents in highly publicised fashion is central to Trump’s command of power.

Trump’s high Republican approval ratings of the present demand attention. Those arguing he will flounder without the outsider’s advantage overlook the finesse of ‘build a wall’ tactics. The wall emblemises decisive action to stop immigration which the unemployed politically alienated masses regard the source of their problem. Too drastic for large-scale realisation, Trump needn’t worry it will be built, fail, and undermine him. Such logic underpins much of his policy. Even in the Oval Office, Trump remains the outsider. His success lies in divorcing himself from political etiquette; to many he, like the Sun King, is the only and even natural man for the job. Careful fabrication of his image and what he stands for, coupled with apparent successes such as in North Korea, render a second term highly possible.

Fault lines of the political order have been exposed to informed masses. Leaders need to assure their people they are on the case. Mrs May should concern herself less with criticising Corbyn’s lack of qualification or aptitude and realise, and take note of, the foundation of his success in his communicativeness and consistency of image, however objectionable it is to some. This image is no substitute for, but must be coupled with effective policy; Louis regularly constructed images of recent military success to galvanise rather than fabricate power. Trump has wedded his untraditional methods with such success in his North Korean affair – if he is not to start running the political scene an experienced politician with more sense needs to meet these new standards.

The historian Jonathan Scott argued that shifts of power in Stuart England – king to Protectorate, back to king – were superficial, and simply adjusted the context of instability in England. Underlying fears of popery, arbitrary government and the weakness of bureaucratic governments remained unresolved and problematic. Similar realities apply to Europe. Conversion to Catholic Christianity, Renaissance, Reformation, the rise of capitalist-democracy and Enlightenment: these are superficial changes against prevailing underlying cultural influences. What has been harshly brought to political centre stage in recent years is the same spectre that has haunted Europe and western authority since the fall of the Roman Empire: who or what is the definitive and legitimate source of authority? The modern democratic state should get its arguments ready, it’s going to be a bitter debate.