Harriet Mallinson in Columns on 10 November, 2011. 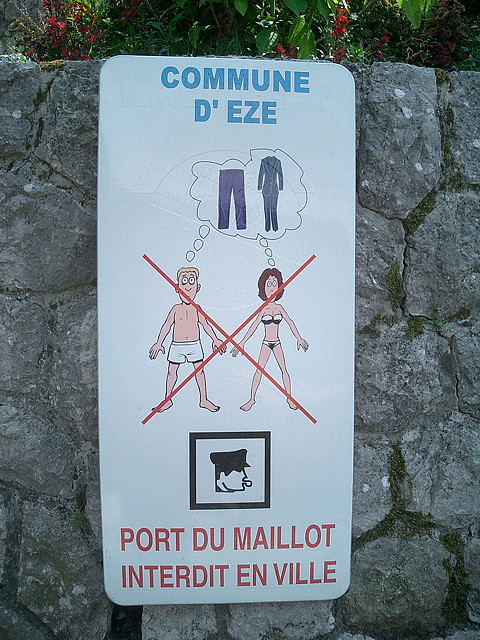 At least the signs are straight forward… sort of.

You know those occasions when you are having a conversation and you only realise half way through that you’re both talking about totally different things? Well… there are a lot of times like that when one’s in a foreign country: an old lady accosts you in the fruit aisle in Carrefour babbling something that could possibly relate to the bananas but then again could possibly be regarding an overly short skirt… and you find the only option is just to nod sagely and say sprightly, “Oui!”.

I’m sure most of you can relate to this; a classic case of the language barrier lunging out of the darkness and taking you unawares just as you thought you had mastered the lingo. Such times can prove absurd and hilarious or downright humiliating. One faux pas of mine occurred when I was fifteen on a French exchange in Paris. I was asked on my first day whether I liked songs (‘chansons’) as I result of which I rambled for about half an hour about the joys (oh the irony) of being in my school choir. Silence ensued. Bafflement was written all over their faces. It turned out they’d asked me about ‘chaussons’: Did I have any slippers? It was mortifying; I believe they lost faith in my language skills then and there! Further errors can ensue over grammar mix-ups: one confused verb and you may have said something highly inappropriate. For instance ‘donner un baiser’, means ‘to kiss’. Get rid of ‘donner un’ and you’re left with something most un-PG: a mistake once corrected in shocked tones by my GCSE French teacher and definitely something I don’t wish to utter whilst teaching in a primary school!

Condoms, awkward at the best of times, are a whole new kettle of fish in France. You’d think un preservatif was a preservative wouldn’t you? But no, it’s the good old love glove and has absolutely nothing to do with food. (Hilariously, condoms can be purchased here from dispensing machines outside every pharmacy and so are available 24/7…a perfect stop off for a randy Frenchman on his way back from a night out….) Meanwhile, I have discovered that one of my friends repeatedly calls me ma puce. A frantic look in my pocket dictionary later, I realised this was a flea… A FLEA for Christ’s sake. How dare he? Luckily, before my blanking him went too far I had a sneaky peek at WordReference (ah, something I couldn’t live without) and it became clear that in fact une puce is a colloquial term meaning ‘sweetie’. Maybe I should have listened more carefully to my French teacher and her tales of vocabulary faux-amis?

Of course, the France/England divide doesn’t stop at the language. Oh no. Take “la bise” for example: the typically French way of greeting someone with a kiss on each cheek whether they know the person or not. And yes, I know many of us do this in England but here it reaches a whole new level. I don’t think I’ve been kissed so much in such a short space of time as during my time in France. Luckily I was prepared for this display of affection on arrival but sadly the same cannot be said for my friend Rachel. Whilst having a group meal on her first day, un homme approached who several of us knew but Rachel did not. She, being nearest him was the first to be kissed… he bent his head towards her, proffering his lips towards her cheek. She recoiled in horror: what did this strange Frenchman think he was doing thrusting his face towards her? He bowed his head insistently towards her once more. Her whole contorted face screamed “Leave me alone, you perve!”. The rest of us watched the whole thing pan out and burst into incontrollable laughter at her terrified bright red face. Not a mistake you’ll be making again any time soon, hey Rachel?

One thing I do appreciate about the French way of life is how relaxed they are in their approach to everything. An American friend of mine has labelled it “the most inefficient country there is”. Everything shuts down without fail for two hours at lunch time and almost everything grinds to a halt on Sunday and Monday, not to mention more holidays than we know what to do with. The fact that in primary schools they have only four days of school says it all really. In one school where I teach, the teachers decide how long the breaks will be, often depending on the weather. No harsh, ear-splitting bells like there were at my school! Furthermore, it seems that the concept of time is different here too. More than once has it happened that I’ve been told the starting time of a meeting only to arrive and realise that in fact the first half-hour constitutes of a cigarette and coffee break which will of course re-occur an hour later…and an hour after that…

Romance with the French takes on a different form too, due to the utter confusion that ensues during most interactions between international lovers. Communication relies heavily on the physical and frequently it seems just simpler to snog and forgo the talking. Kissing after all is a world wide concept, thank the Lord. Moreover French texting is a phenomenon I’m not sure I’ll ever get used to, as they too have their own versions of “cba” and “tbh”. Deciphering a French text can be like decoding ancient Greek and you can forget attempting witty banter in response, it will just be lost in translation. Unsurprisingly, all this amounts to rendering flirting a nigh on impossible activity. It’s hard to be seductive and coy when you spent most of your time questioning Quoi? and Répétez, s’il vous plaît!.

Obviously it’s these linguistic and cultural differences which make life in a foreign country so much more exciting. Where would the fun be if we went abroad and everything was exactly the same as it was back home? Although I can’t help wishing they’d serve milk with their tea and coffee…