Reinventing the World: Symphonies for the Future 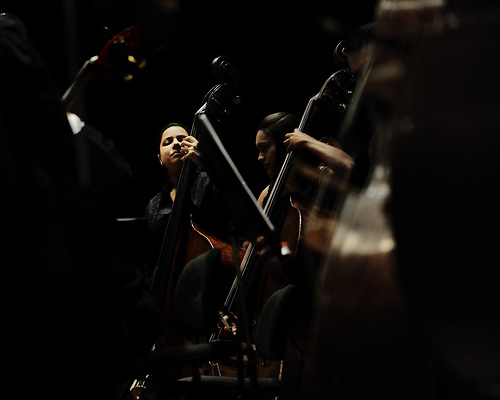 What do classical music, Baraquisimeto and the eradication of poverty have in common? Not the average charade question, I guess. The answer lies in the uniqueness of El Sistema, which has become the response to many other questions too.

Conceived by Venezuelan Maestro (in Spanish, conductor) José Antonio Abreu in 1975, El Sistema is a social programme that fosters the creation of orchestras through a system that teaches classical music in a collegiate way. Over the 35 years of its existence, El Sistema has gone through ups and downs; interestingly enough, due to its patriotic nature (it’s a subsidized social programme) and Abreu’s utopian vision of the orchestra representing the ideal society, the initiative actually flourished during Hugo Chavez’s leftist administration and has gained international exposure through a multitude of awards.

So, that’s how it works. Instruments are provided for children as young as 2 years old and a group is formed. As soon as the children reach an intermediate level they are empowered to teach new children from different groups. Those who move from intermediate to professional have the chance to become conductors and have their own orchestras or join the Simon Bolivar Youth Orchestra of Venezuela (SBYOV, pictured above). As a result of the efforts, El Sistema has 30 official symphony orchestras, dozens of Luthiers and musical instruments workshops, hundreds of smaller music ensembles, and, above all, around 265,000 children from poor backgrounds currently attending music classes and having their lives changed.

Among these achievements is Gustavo Dudamel, probably the sweetest fruit of the enterprise. Considered the best conductor of the new generation, Dudamel is the principal conductorof the Gothenburg Orchestra in Sweden, the musical director of the Los Angeles Philharmonic, and the artistic director of the SBYOV in Caracas, Venezuela. During 2010, Dudamel was also the recipient of the MIT’s McDermott Award in the Arts. In this context MIT World produced an incredibly intelligent and inspiring interview where a lot more can be learned.

Already regarded as the most inclusive musical education system, since it includes children from all social backgrounds as well as those who suffer from disabilities (including deaf and blind), El Sistema and Venezuela are also praised as the future of Classical Music. Due to its phenomenal success, it is now being exported worldwide. In the UK, for example, Sistema Scotland was established with a grant from the Scottish Arts Council, as a result of an initiative by its chairman Richard Holloway, with the purpose of breaking the cycle of poverty in the economically depressed area of Raploch, where male life expectancy is less than 63 years. In England the Department of Culture has put aside £2m to the Harmony Scheme which will focus on impoverished areas.

In 2004, Tocar y Luchar (To Play and To Fight), produced with Venezuelan public funds and directed by Alberto Arvelo Mendoza, was the first documentary about this music phenomenon, followed by the 2008 Franco-German production El Sistema telling us more about these stories that are making history.

Although it is a combination of seven universal notes it seems that music and the choice for a better future are now becoming as democratic as having a pair of ears. In Kabbalah, Jewish mysticism, it is written that the coming of the Messiah will gift us with an 8th musical note that shall transcend us all to a superior spiritual experience. Let’s hope and play and fight that what we are now witnessing becomes the first steps to the fulfilment of a prophetic new reality.

P.S. By the way, both Dudamel and Abreu were born in tiny Baraquisimeto.