Reinventing the World: Consumption By Design 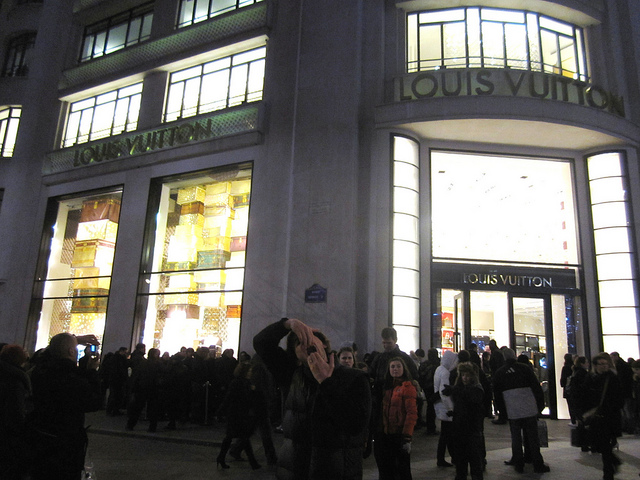 The world’s largest Louis Vuitton store, Paris, with a huge queue to get inside

When Naomi Klein wrote her best-selling book , she was criticized as she promoted her work through an “anti-marketing” marketing campaign. Then again, in marketing terms, there’s no such a thing as bad publicity. Movies like Logorama and The Age of Stupid increased the awareness of the world-as-a-stage simulacrum driven by a consumerist culture.

In academia, business students are being taught of marketing as a philosophy predicated to democratise the wants and needs of the masses; know thy produce, consumers and entrants. Although marketers avoid associating it with the word persuasion, a visit to our Queens Campus could be quite illustrative by observing some of the “neuromarketing” experiments currently being done there. F-r-e-a-k-y. Not quite Aristotelian material but it is certainly leading people to find meaning, contentment, and acceptance through what they consume and telling marketers how to go about it.

It doesn’t get better when the spotlight is turned on us. Shoppers tend to point their fingers towards government and an extreme laissez-faire relationship with corporations; to corporations, due to obscene profits and even to abused workers by insisting that nobody forced them to get a sweatshop job. However, in the end, companies are simply responding to the stimuli provided by clients with more and more marketing philosophy. Results are very clear. Besides the current market failure, such impulsive spending practices have massively depleted raw materials used to make products and energy to promote marketing campaigns. The question is: how to break the cycle?

Recycling – the commonplace answer – is offered on all sorts of packaging and policies adopted by sensible businesses. What most of us don’t consider is that not everyone recycles, not everything can be recycled and in the case of glass, for example, a recycled version is only 2% more efficient than a newly blown one. The green motto “Reduce-Reuse-Recycle” is still valid, but not enough. All it does is less bad, which is no good.

Sustainability is only a first step towards survival, maintenance.The key is not how to minimize the impact but how to maximize the benefit. Designers are aware that, in fact, their job is to conceive our future. Their creations are the interface of human intention, from an ergonomic handle to an intuitive videogame.

The chemist Michael Braungart and the architect William McDonough created the Cradle-to-Cradle quality process which aims to re-create safer products and eliminate waste and obsolescence. Through this approach every substance of a product can be systemically up-cycled (converted into products of greater value) for either nature’s or industry’s cycles. For example, Braungart (with Nestlé) chemically restructured the composition of a Popsicle stick and packaging so that, once that glossy wrapping was thrown on the ground, it would melt and leave seeds and water as sub-products. Such logic is able to turn commerce into a regenerative force. It represents an opportunity to redesign whole industries where the production and consumption of goods is not only safer and more profitable but environmentally enriching and socially virtuous. The re-invention of industrial paradigms illustrates a key principle of eco-effective innovation where products are essentially packaging for services.

Although based on the scientific method, Cradle-to-Cradle is not a science. While being highly creative it can’t be considered an art form. In spite of an intention behind its actions this is also far from being a philosophy. It’s simply business, good business; smarter, more profitable and has the benefit of giving people a genuine choice to be individual without jeopardizing their integrity by becoming part of labelled lifestyles.

Transforming cultures is, of course, no small task. However, if consumption ceases to be an end in itself, as well as the goods we consume… education, business, government and the media could be positively influenced to combine efforts to recreate the overarching frames that shape how humans perceive reality.