Reinventing the World: Call of Duty 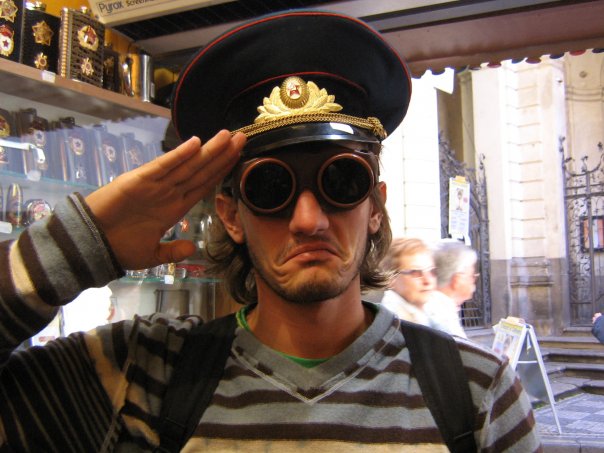 This man wants YOU to serve your planet. How can you refuse?

Rebels from the world unite; the revolution will not be televised!

What is the radical plan to save the world?! Where is the philosopher’s stone that will save us all? We need a holy grail for the Earth! Welcome to the ultimate Large Hadron Collider and forget about protons, neutrons, gluons – here we are more interested in ideas.

The planet urges a radical revolution in the human mind. Originality is far from buying the latest iPod. I’m talking about brain wiring reengineering. Just look at the world around us, with all the misery, conflict, destructive brutality, aggression… civilization after civilization, tuned up or down, those have been the common denominators of mankind industriousness. Of course there are good things, but we need them to be better. There’s no magic pill but a choice to focus our energy on true and purposeful lasting change, the one that must occur first inside of you. Stop accepting things as they are, question and you’ll realise that to understand is the first step to transform what is.

Imagine how revolutionary it would be to have planes that could fly nonstop… powered by the Sun! This is what Solar Impulse is currently doing and among its many partners is the Frenchman Nicolas Houlot, who manages a foundation carrying his name with the core mission to modify everybody’s behaviour in order to move towards a new form of society and culture based on sustainable development. The Foundation participates in the publication of knowledge about the ecological state of our planet and uses all available means to convince the greatest number of people about the necessity of taking action to slow down the impact of human activities.

Some say that perception is a form of reality, and by simply adjusting the angle a new interpretation may emerge. Since transformation cannot happen overnight, a new set of eyes could be the temporary element towards a paradigm shift. Art is the best example. We have Escher and his impossible representations that almost make us believe that you can actually go upstairs and be on a lower level at the same time. More pragmatic is what many airlines have done over the last few years by fictionally extending their flights’ length. Passengers were complaining of delays and the same were becoming very costly to the airlines. By slightly exaggerating the expected arrival time airlines managed to be on schedule, and customers would rarely complain about early arrivals. Who would guess that managing an airline company could be somewhat artistic? Not quite radical but certainly original and resourceful.

In other words, a whole reality was transformed with no resources other than creativity. Perhaps the “fake it till you make it” suggestion could be the transitory scenario for a better place.

For instance, sculptor Anish Kapoor’s public installations seem to be performing this role of providing a new perspective, usually more interesting than the one experienced by the observer. Just place yourself in front of the “Cloud Gate” in the Millennium Park in Chicago or “Turning the World Upside Down”, installed in the Israel Museum in Jerusalem. Following Kapoor’s own words when asked about his artwork: “I’m thinking about the mythical wonders of the world, the Hanging Gardens of Babylon and the Tower of Babel. It’s as if the collective will comes up with something that has resonance on an individual level and so becomes mythic. I can claim to take that as a model for a way of thinking. Art can do it, and I’m going to have a damn good go. I want to occupy the territory, but the territory is an idea and a way of thinking as much as a context that generates objects.”

Skeptics would argue that people don’t change and disguising the dirt won’t change the fact that it is still there. True. When Silvio Berlusconi promised to clean Naples in 10 days, which was suffering from increasing amounts of litter, he actually did it. However, the solution was just the transfer of all that garbage to a different place. A remediation rather than a solution.

The industrial designer (among many other descriptions) Jacque Fresco developed a self-contained bathroom unit. The water used to shower and wash your hands is the same used to flush the toilet, consuming a sixtieth of the volume used in a normal bathroom. His rationale is that technology is able to change the environment surrounding us, but asking people to change their behaviour becomes obsolete. People won’t change. Obviously we are a long way from such an accommodating system but its likelihood is quite reasonable in a world ruled by scientific method rather than opinions.

Which way would the man from La Mancha choose to reach that unreachable star? All a ride needs are passengers and that’s where you enter the story. No matter which path one takes, the journey becomes more interesting if written by a plurality of hands. In this avant-garde crossroad unreasonableness is the new disorder. Join the party!

Have an idea of how to save the world? Leave your comments below.