R is for Race 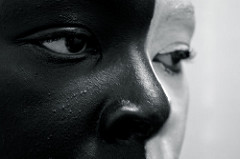 Race: any one of the groups that human beings can be divided into based on shared distinctive physical traits.

The other day my mother told me a story about when my brother and I were small. My brother had had a disagreement with a friend, who was white. It was probably over something petty and stupid, like most of the arguments you have when you are around ten years old. They argued and eventually the argument got slightly heated and the other boy sullenly shouted that “he hated Chinese people.” Quite loudly. It’s funny, though, how children react to such comments. Our responses were the same. Why is he calling us Chinese? We’re not Chinese. Sometimes I think it would be nice to go back to a time where my initial response to any racist comment was that simple.

I’d like to stop having to think about my race. It’s bad enough being a woman. But this is very much easier said than done and in all honesty, it is extraordinarily hard to stop thinking about it when I am in Durham. Coming from an extremely homogenous country to a city that is nearly just as homogenous doesn’t do great things for one’s self esteem. I’m sure that a lot of non-Asian people will feel the same way if they make their way to South Korea. I’m not saying that the community I come from is free from racial prejudice; many people would be shocked if they heard the phrases some Koreans say about people of any non-Asian ethnic background.

But race is difficult to talk about, even though it is something that is so incredibly obvious. I was talking to my mother once about something race-related that had insulted me, and halfway through my explanation she interrupted me with the question: “so, do you think that being Asian is inferior?” Even my own mother thought that I had some sort of inferiority complex because I was talking about race. You have to be so careful about the way you phrase things, but it seems ridiculous that you have to tread so lightly in order not to insult anyone. Why should you, the one facing that prejudice, be careful? If anything, shouldn’t your brutal honesty on these issues be something that people should listen to?

Some people complain that others relate everything to race: those who are prone to saying the old phrase “everyone is equal, the color of your skin doesn’t matter”. That’s incredibly naive. Who doesn’t know that people are equal? The problem is that the phrase is idealistic and doesn’t address the fact that no matter how many times people repeat that phrase, race is always going to exist. Repeating the phrase will not change the minds of bigoted people. Often the attitude stems from never feeling the consequences of being a racial minority. Many seem to be oblivious to the fact they are privileged and insist that they are the ones getting oppressed. I’m not going to address that point because it isn’t true. Ignoring the fact that you haven’t been systematically oppressed is idiotic, as it means that you don’t understand what systematic oppression can do.

In all fairness, I tend to avoid people who rely on stereotypes as a determination of character. However, it’s hard to remember the nice things that people say when you hear “you shouldn’t use the taxis in Durham because all the drivers are immigrants” or when yet another “ni hao” is directed at you from a passerby. But we expect people to have the same standards as us, and it is only when they fail to live up to our expectations that we remember their comments.

I’ve been ranting on about this issue, but I’m not innocent of making presumptions based on race. I try to not do it, but after living in a society that fails to see how some comments may be offensive, it’s hard to make myself see my own hypocrisies. I think I’d rather admit that I am wrong than just ignore my faults and blame the world for everything.

The notion that racism will disappear from the face of this earth with time is a very hopeful and unrealistic claim. Whenever you think you’re making progress, you get faced with the likes of Trump, complete with his racist, misogynistic and xenophobic views. And once you realise that there are so still many ignorant people in the world, you begin to lose faith.