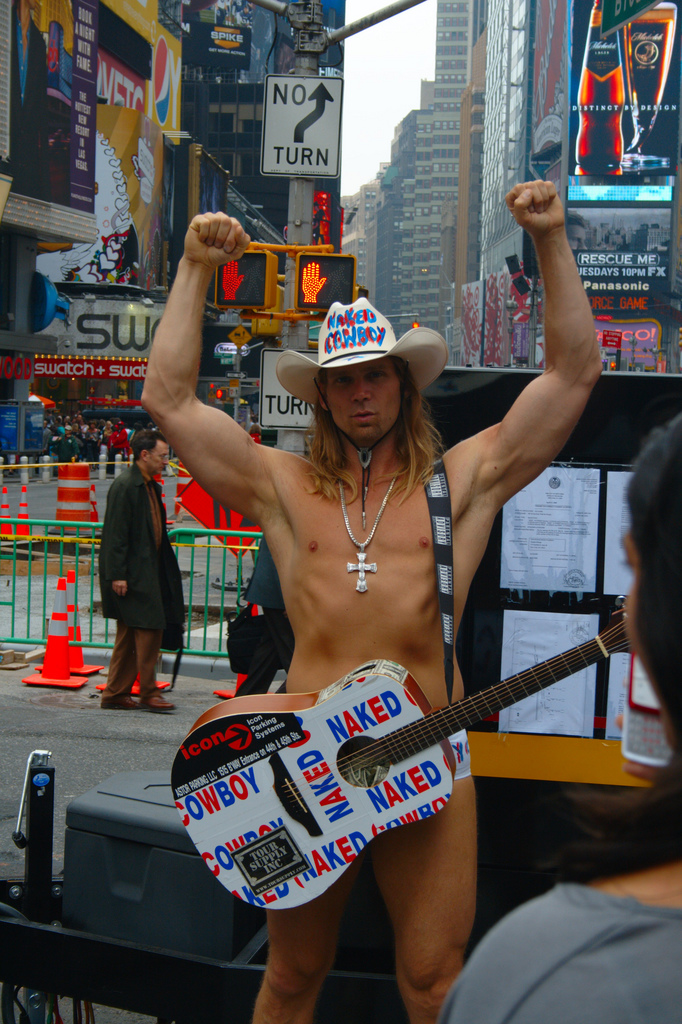 You may not have heard of Robert Burck. You may not care about his politics. But if you’ve been to New York, you may know him as the Naked Cowboy. The busker has been entertaining the masses with the strategic aid of Y-fronts, Stetson and guitar long enough to be part of the city’s furniture – but it would appear he has aspirations to more than just his local fame. He’s standing for office.

Yes, you read that correctly. Burck has cut his hair and not only dressed but suited up to announce his intention to run for President. He plans to run as a candidate for staunchly conservative, anti-establishment activists the Tea Party. He also insists there will be nothing “cowboy” about his policies. And no, I did not make that up.

Despite such questions as “Are you wearing a codpiece?” and numerous enquiries as to the location of his usual Y-fronts, Burck insisted that there was “no time for games” when announcing his plans at a news conference in New York. Apparently, “America is rapidly transforming into a government-run enterprise… American politicians are selling out America and its most cherished institution, that being capitalism.” His policies, he also declared, will include the closure of America’s borders, the abolition of trade unions for government workers and compulsory drug tests for welfare claimants. Human rights, it would appear, he’ll worry about later.

It makes sense that economic views like his would align with the Tea Party – a loose group of right-wing activists formed amid a swell of protest at government bail-outs of failing companies such as banks and insurers, objecting to what they perceive as the erosion of capitalist society (which is, of course, perfect, and never did anyone any harm). Most Republicans, they feel, have become too moderate. Though the Tea Party is steadfastly focused on economic policy, many members are deeply socially conservative too, and Burck’s ideology is likely to appeal in this regard as well.

What’s more, there’s a strong desire within the group to bring fresh blood into politics and throw out many of the old, established faces. For all his attempts to get serious, someone known as being so different to the mostly sombre, complacent and indeed clothed past inhabitants of the White House appeals to the same vein of rebellion that made Brits get Killing In The Name to Christmas number 1 (what was that about doing what they told you, again?)

Living in the country which produced the Monster Raving Loony Party, bizarre politics is a part of life. I’m endlessly entertained by Boris Johnson. America’s political celebrity culture is far more pronounced than Britain’s, but I didn’t even lose the will to live when Paris Hilton attempted to stand for President (though if I were American, that may not have been the case). Burck’s career change is a classic case of what I termed in last week’s column the “Schwarzenegger effect”: a (sort of) celebrity using his (sort of) fame to propel him to (unlikely) political success. He’s sort of like a cross between the bloke with the accordion on Framwellgate Bridge and Kilroy, but with a better tan.

The Naked Cowboy has clearly harboured political aspirations for a while – he announced plans to run for Mayor of New York before dropping out of the race in 2009. Maybe he thought about the incumbent Michael Bloomberg and decided that that town wasn’t big enough for the both of them. In any case, it will be interesting to see how he does in his campaign – though Obama, despite his current problems, is still looking good for a second term, this is the nation that voted George Dubya Bush into office (well, debatably – right, Florida?), and the Killing in the Name effect can be powerful. He might not stroll into Washington, but he may do better than we expect.