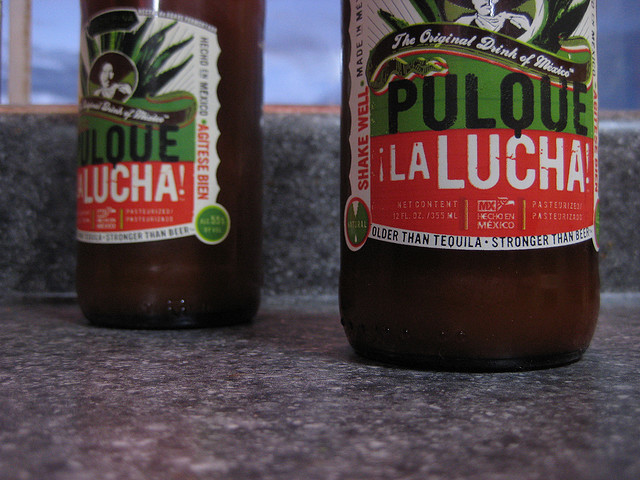 Strong claims for a little bottle

Pulque: What is it?

Pulque is a thick, milky alcoholic drink with a light foam on top. Although difficult to digest for the uninitiated, it gets easier. Especially if there´s some bicarbonate of soda handy. You make it by fermenting the sap of the maguey plant (the aguamiel), the same plant from which tequila is produced. Production however is slow: it takes around twelve years for the plant to be mature enough to make the sap for pulque production!

A history of Pulque

Pulque has been made by people in Mexico for thousands of years. There are many mythological legends about the invention of pulque but perhaps the most interesting from the story of the God Tlacuache, an opossum who used his human-like hands to dig into the maguey and extract the sap. He became the first drunk and for the Aztecs, Tlacuache was thought to set the course of rivers and these rivers were generally straight, except of course when he was drunk. Then they follow Tlacuache’s meandering path from cantina to cantina (the Mexican name for a pub).

Other Aztec myths link the Centzon Totochtin – or the 400 rabbit Gods – to the importance of pulque as they were said to have many huge parties. The mother of the 400 Gods of drunkenness was called Mayahuel, the Goddess of maguey products, who with her many breasts fed her four hundred drunken children. One of these rabbit Gods was Tepoztecatl, the god of pulque, drunkenness and fertility. Another was Macuiltochtli, the goddess of drunkenness and excess: the god who punished the inebriated with a bad hangover after a night of partying.

During the Aztec period, pulque was only drunk by dignitaries and priests at important times of the year. For commoners, only the elderly and pregnant women could drink it for its health benefits due to its high content in carbohydrates, vitamin C, B-complex, D, E, amino acids and minerals such as iron and phosphorus.

After the Spanish invasion, pulque lost its sacred significance and began to be drunk by the indigenous and Spanish alike. At first no restriction was placed on its consumption, especially as the pulque tax provided a source of revenue for the Spanish conquistadores. As time went by, the Spanish introduced laws restricting the number of pulquerias (pulque bars) to a total of thirty-six in Mexico City as well as prohibiting the mingling of the sexes. Opening hours were also limited to daylight.

In post colonial Mexico, pulque was responsible for the first railways in the country transporting the drink from Veracruz to Mexico City. The high levels of consumption of the drink made many families rich and powerful as “the pulque aristocracy” who dominated much of the politics of states such as Hidalgo and Tlaxcala. During this time in the 19th Century, pulque reached its peak and was drunk by the rich and poor alike.

However since these times, pulque consumption has seen a huge decline. Lazaro Cardenas´ began a campaign against pulque in the 1930s as then-president of Mexico in an effort to reduce alcohol consumption in general. Irrigation, roads and other infrastructure have made other more lucrative enterprises possible including severe competition from Mexican and European beer producers such as Corona and Heineken. Today the number of pulquerias has dropped significantly and those that remain are often small enterprises which sell generally locally produced products.

A trip to the Pulqueria

There are around 1000 pulquerias remaining in Mexico City today, each with their own ambience and feel. I made a trip to several in the Mixcoac area of the city to find out more, starting at a more up market place before heading into the locals’ territory. The first I visited was “The Birdsong”, a more up market place, like a café with artistic murals on the walls and friendly staff. Diego Rivera (one of Mexico’s most famous artists and the husband of Frida Kahlo) once said that these murals in the various pulquerias were some of the most important manifestations of Mexican painting available. I had one drink there seasoned with mango. It was thick and difficult to digest but the second went down a lot more easily.

We visited several other pulquerias that day but, finally, we arrived at La Pirata, or “The Pirate”. I can honestly say this was possibly the most disgusting place I have ever visited. Sawdust covered the floor and this seemed to be a closed off space, like a members only club or a saloon in a cowboy film. I entered with some Mexican friends and we were stared at at first but with a little bit of banter and chat, we fitted right in. There weren’t any other women in the establishment but the toothless old men were delighted to be able to dance with my female friends who gladly did a little salsa with these old gents. By seven o’clock in the evening and kicking out time, I was totally smashed and happy after a great day. Many Mexican friends were somewhat surprised by our little pulque tour, no doubt because of the socio-political baggage that the drink carries. For some it is nothing more than a drink of the poor.

Today in the USA, pulque has started to be imported, not just for Mexican Americans but also as a health food sought by athletes and bodybuilders. I am sure that pulque means different things for different people; yes, for some a way to feed their alcohol addiction, but for others a proud cultural Mexican tradition. Perhaps pulque is a drink for the future, and not just the past.