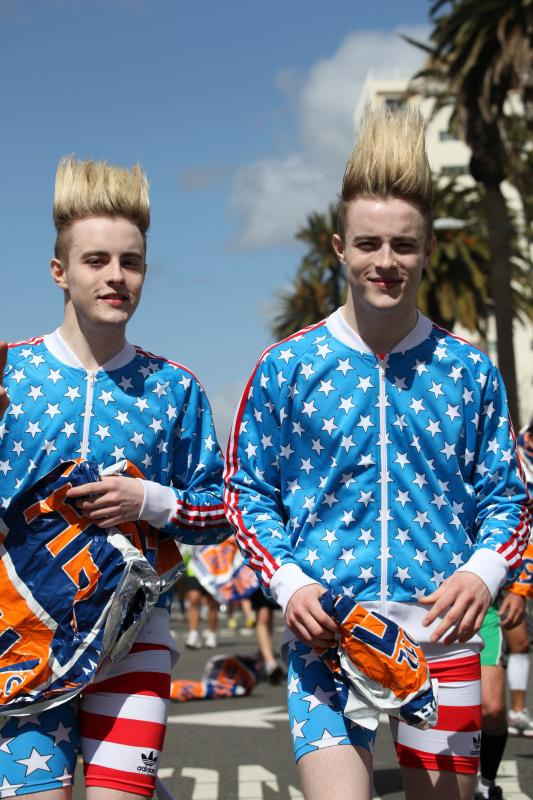 If the mere mention of the word “Jedward” sends a shiver down your spine, then you may not like where this article is going. Believe it or not, Jedward are in fact- twins. Not only do they look alike, they also lip-sync, dance (a bit) and, most importantly, dress identically. Since appearing on our screens on the X Factor in 2009, John and Edward Grimes have become perhaps the most annoying pair of identical twins to ever grace humanity. Granted, they have had some success, appearing on the Eurovision Song Contest in both 2011 and 2012, and selling at least a few albums worth of music to the international market. However, what I find most annoying about them is not, you will be surprised to note, their barely tuneful voices, nor their weirdly robotic dance moves, but the way they look exactly the same. It is their sheer identical-ness that really bothers me, down the last hair on their bleached blonde heads.

In fact, most twins that dress the same really annoy me. I don’t understand why parents of identical twins feel the need to dress them exactly the same- are they not similar enough already? Just think how many problems it could potentially lead to. What happens if you dress them the same from birth and end up never being able to tell the difference between them- the classic Fred-George scenario? Or, perhaps this will happen with the twins themselves, they may feel that their separate identities are compromised by their similar clothes- many children have to struggle to differentiate themselves from their parents and siblings anyway, so why make the task even more difficult?

In addition, it’s not just the fact that these children are being dressed in a similar way that is an issue- it’s the clothes that they wear that can make the difference. When you enter a clothes shop, the children’s section is often noticeable for its bright colours and playground atmosphere. However, nowadays, this has changed, the children’s section is now noticeable for the fact that it contains near perfect miniature replicas of adult clothing. The wide selection of baby chinos and denim skirts available for children is staggering, quite often outdoing the men’s section in both choice and style.

The apparent need for adults to make their babies seem more mature than they actually are is a fad that is unfortunately increasing in popularity. Babies do not really need to wear shoes before they can walk, they are effectively overly protective socks! Furthermore, the increased obsession with image has now clearly transcended the adult market, and has become a stock concept within the children’s sector also. Babies are babies, toddlers are toddlers. They are not cabbage patch kids you can dress up how you like, is it not somehow degrading to see a small girl dressed in a skimp outfit that would look out of place on a sixteen year old, let alone a girl of sixteen months?

Unfortunately, I feel we need only to look to the USA to see the dire consequences of this increasing trend. Honey Boo Boo for those who don’t know, is an American documentary charting the exploits of Alana, a young girl who takes part in beauty pageants, and her family. The show exemplifies this pageantry in children, and whilst admittedly there is an element of adorable charm about the show, it also depicts the reality of the obsession with beauty. Some mothers will go to great lengths to ensure their daughter wins the pageant, or stays beautiful, with some even resorting to body enhancing surgery to retain their crown into late adolescence.

Children should retain their innocence, there is nothing wrong with dressing your child in a fleecy babygrow. If it is acceptable for adults to dress in onesies, what is wrong with toddlers also doing so? Fashion changes may reflect the increasing sexualisation in today’s society, but this should not be inflicted upon innocent children, baby photos are certainly not audition folios for modelling agencies. I have no qualms with parents dressing their children in whatever they like, as long as it is age appropriate, and inoffensive, surely they should put their child’s dignity before their passion for haute couture? Children should frequent playgrounds, not catwalks.