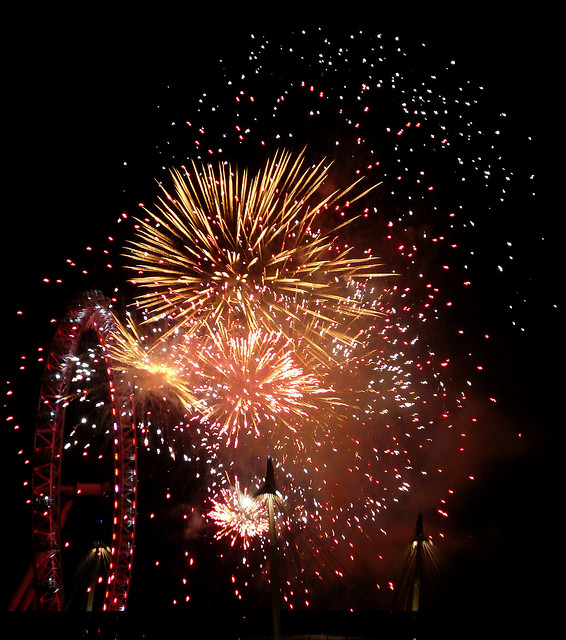 New Year celebrations are personal and public at the same time

Not long ago, , owing to unrealistic and perennially unfulfilled expectations in combination with a compulsion to “get plastered”. Undeniably, there is a great amount of pressure on the years’ concluding evening, but I propose that how you choose to celebrate is perhaps entirely incidental. I’m not here to add to a tawdry list of why my New Year celebrations may or may not have been of the epic proportions anticipated, nor is this is not my ever-so-subtle way of educating my New Year companion (you may recall the aforementioned “Yorkshire-bred, middle-class homophobe” from previous articles) of my disappointment with his company. Rather, whatever your feelings, whether you woke up on New Year’s Day sober and refreshed, or bleary-eyed and hugging a toilet, you were part of an incredible event, of literally global proportions, where everyone celebrates the same thing, for entirely different reasons.

People exercise mixed loyalties over New Year celebrations. Whilst many will claim that they drink to such excess to abide by the tradition of “seeing the old year out and the new one in on a good note”, this is not in keeping with the notion that January 1 is supposedly symptomatic of the upcoming 364 days (unless of course, you intend to spend the remainder of the year stifling vomit and retrieving undergarments from the lampshades). What is interesting about it is that when quizzed, people generally have a fairly hazy basis for their celebrations. Are they aware of the religious significance? Do they understand that it is universally celebrated on January 1 primarily as a result of the expansionist nature of Western culture? More importantly, do they care?

I assure you, they don’t.

The brilliance of New Year is in its intrinsic dynamism. It can mean whatever the hell you want, however trivial, and you know that there is still a wealth of other people celebrating with you regardless. You can be dispensing with a bad year or welcoming the continuation of a good one and you will not be doing it alone. Even those wilful obscurists and non-conformists who go to bed before midnight are still exercising a degree of collegiality with their fellow non-celebrators.

I used to believe that the whole evening was a distinct non-event, reeling off some pseudo-intellectual crap about consumerism and societal pressures. It is of late that I have come to realise that seldom are we given these opportunities to (not) celebrate a single evening however we wish, on a scale on which no other event is recognised. It may be suggested that Christmas is of comparable significance, but it must be remembered that despite some irredeemable levels of ignorance (I was recently told of someone wishing Santa Claus a “happy birthday” via Facebook on December 25), Christmas is still a religious holiday with a more defined, central focus.

Whilst your New Year festivities on a personal level may be flawed, disappointing or resulting in a bout of community service, there is no denying that as a global event, the concept and power of New Year’s Eve is almost unfathomable. New Year’s Eve transcends reality as it is built on the auspices of hope, luck and success, ignoring the fact that, in most walks of life, we have never been promised a tomorrow. It is a time of reflection that presents endless opportunities for growth and progression, when even the coldest of hearts and the most unfortunate of pasts can take solace in this rejuvenation presented in front of them alongside those with perhaps more enviable memories. Many people may not be overly aware of this annual opportunity for revival, but even drunkenly burbling; “mate, 2011 is gonna be bloody ace” in a friend’s ear at midnight is reminiscent of the subconscious power of the change of the year.

Yes, it is “just another evening” and it is unlikely to be groundbreaking or create any particularly standout memories, but what it represents is far more important. It is this terrific global event (Chinese exempt, naturally) where our reasons for celebration are entirely personal yet completely universal. When else could we witness the juxtaposition of newlyweds reflecting on the joys of the year gone by, celebrating alongside a recent divorcé, welcoming the arrival of a fresh start? Their reasons for celebration differ to the greatest extent, yet they are united by this all-encompassing night of promise. For this to even occur is remarkable, but on a global scale is almost beyond comprehension.

Love it or hate it, New Year’s Eve (the apparent “Marmite” of annual events) has to be admired and respected for all it’s worth. Whether you were sipping Moët in Cannes or re-examining some snakebite after an ill-conceived bet with a biker in Milton Keynes, in your own way, you were part of something spectacular.