My Stress Levels According to What Confectionary Item I’m Baking

If there’s one golden rule to know about living with me it’s to never go into the kitchen during summative season, because one of two things will happen.

One, I will sense the presence of Another Human and monologue my various woes to you for the length of time it takes to boil brown rice (which is to say, an eon).

Or, alternatively you will be minding your own business and walk in on some sort of manic sugar gremlin with flour in her hair (and on the floor and sofa, somehow) and golden syrup where golden syrup has no business being.

In principle, baking offers creativity, consumability and instant gratification in what is otherwise a thankless and unending task of footnoting. In short, baking tends to mean that for a brief sacred moment you get a reprieve from Vernon Lee’s theories of tactile aestheticism or explaining at great length why some old curmudgeon of a 20th century author isn’t actually ‘that’ problematic.

Also, unlike making mistakes in an academic setting, if things go sideways there’s a rather handy built-in way to destroy the evidence of your shamefully deflated meringues… You eat them. It’s a well-known anecdote that your meringue either dies a hero or lives long enough to become Eton mess. I’m pretty sure that’s how the saying goes – wry baking epithets aren’t really my flambé.

So yes, flour gets everywhere and eggshell shrapnel finds its way into the mixture despite your best efforts, but that just means that you will ruddy well have to crunch these brownies, doesn’t it, nameless disapproving flatmate. 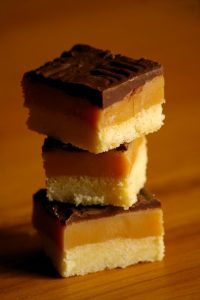 Okay, this is a classic case of having two summatives due in a week and a diss plan to get in for Friday. Having opened a word document bearing the words ‘diss plan’ on it and feeling like that is sufficient grounds to warrant a break, you find yourself in the kitchen. Interesting.

You therefore commence baking something that, in the recesses of your tiny mind, you know is a 5-hour long task … at 6 o’clock. Spare a thought for your housemates that want to eat lol.

Pots and pans will be clattering around with a level of unashamed disorganisation that only Boris Johnson’s cabinet reshuffle can rival. Your least favourite housemate will find their Pyrex dish co-opted as additional real estate for your shortbread layer (having long since run out of appropriate vessels yourself).

Much like when you’re making pancakes, somehow – through no fault of your own – you end up doubling the mixture because it’s too thin so you add flour then she’s lumpy so you add more milk and suddenly you have a veritable lagoon of batter. Up a creek with no spatula, so to speak, and more shortbread than you reasonably have room for.

Jump-cut to a Rocky style training scene where I’m punching shortbread into tins and bopping to Blondie. My housemates are all aware that I’ve forgotten to line the tin but it’s much too late and really rather unwise to correct me at this stage. Like footnoting my woeful excuse for a summative, it will remain very much a problem for Tomorrow Hannah to grapple with.

So while the shortbread cooks and I commandeer the entire oven/hob/worktop surface area, I may retire to do some reading. Equally I may finish the final episode of Cheer. Who can really say?

Around 10 o’clock, after the shortbread has cooled (read: been forgotten) I’ll set about making the caramel, very much over the whole process, but nonetheless in need of sugar. You will wait by your pot for a few decades until the sugar and condensed milk finally condescend to come to boil and put you out of my misery. Into the fridge she goes, and rest assured by tomorrow morning you will find that she is not only comprehensively stuck to her tin, but you briefly considered offering the traybake to NASA as evidence of a recent meteorite shower.

The millionaire’s shortbread is not for cowards, basically.

This is a store-bought pastry and jam moment. It’s not so much about the creative process as it is the assembling; the organisational clarity that only combining carbs with pure sugar can bring. You roll the dough out with whatever vodka bottle is languishing in the kitchen cupboards and find either your biggest mug rim or your most frivolously shaped cookie cutter to stamp some cases out. (I tend to opt for a penguin shape, but other arctic figures are available).

The humble tart is for when everything is coming to a head and with it being crunch time figuratively, having something to actually munch on becomes essential to get you through the final diss chapter proof. 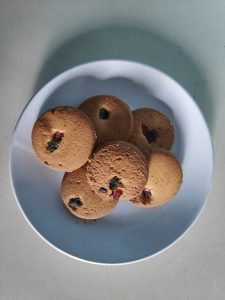 Any cookies worth their salt are things of neither law or order – they are made with love but also reckless disregard for the usual utilisation of whatever is in your cupboard. Raisins and nuts go in, of course, along with shards of chocolate and a splodge of something syrupy, but apparently so to do an all manner of chia seeds, pumpkin seeds, flax seeds, pine nuts, garden gravel… Anything goes.

If jam tarts are for when you’re trying to find that one quote that seems to have literally disappeared off the face of the everloving earth, then cookies are for when you have a thousand JSTOR tabs open, each more long and contradictory than the last. You’ve just remembered your tutorial tomorrow on the Waste Land and you want to throw your laptop out a fourth story window and become a beach crab. You consume four cookies as you anticipate the mortifying ordeal of monologing into the grim silence of a dead tutorial. ‘Self-care’, you whisper to yourself.

Ok so this one is for when we’re on top of things. When we call our parents and say that everything’s fine, and actually mean it. Can you imagine??

That summative has just been kicked to the curb, you just led your tutorial and even did a little extra reading for your lecture tomorrow. We’re good.

There’s something about making bread that brings out the ancestral memory of an 18th century scullery maid working in a Kentish townhouse. Whether it’s the smell, the raising agents or the symbolic value of good old-fashioned sweet carbs, it’s something that we truly love to see.

Of course, when you’re drizzling the tasteful ribbons of icing over the top of the buns you will receive a text from your course friend asking whether you’ve submitted your literature review due today.

Would I get in trouble for saying ‘that’s the way the cookie crumbles’?

This one is for the friend that thinks they’re on top of deadlines but actually maybe just might possibly, you know…. not be??

Fulsome and fibre packed though they may be, a wholesome comfort food moment they are not. (I say this with respect; please don’t come for me, granola gurus of Durham).

That said, these granola bars serve two purposes (outside of the bold decision to consume them)…

Stress levels: uncharted – it’s maybe time to take them out on a walk.