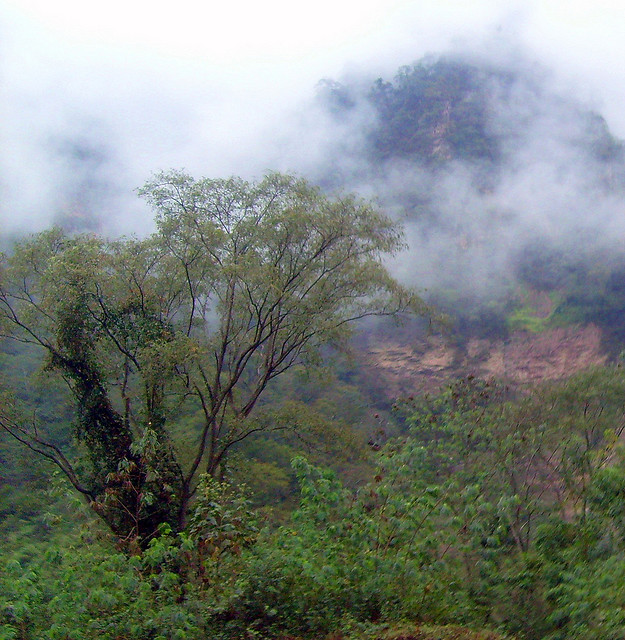 Does all of this have equal rights to humans?

I’ve heard plenty of suggested ways to protect the environment. We’ve all been told to “reduce, re-use and recycle”, the search for sustainable fuel sources goes on and nanas have taken a break from making cereal to knit a cover for the hole in the ozone layer. We should be using our cars less (which is why cuts to public transport subsidies and constant fare rises are so ridiculous – another article there) and turning the heating down a few degrees, while judgment will certainly fall upon those who fail to hug trees at appropriate moments.

There’s been plenty of “green” legislation and government target-setting, too, and while industrialised nations pretend they want to cut carbon emissions and Al Gore (ironically) goes nuclear over climate change, one voice which has always been critical of the half-hearted or insufficient measures taken by the developed world has been that of Bolivia. Frequently derided by the UK and USA for demanding much steeper cuts in emissions, the nation has long suffered environmental damage incurred while mining for tin, silver and other major resources, and studies have presented a worst case scenario in which much of the terrain is rendered desert by rising temperatures.

In recent years, however, the resurgence of powerful indigenous groups has been accompanied by a revival of an indigenous spiritual worldview in which the earth deity, Pachamama, and the environment as a whole are at the centre of all things. All living things, humans included, are of equal importance. The state’s first indigenous president, Evo Morales, sits in power with a comfortable majority, and is about to take the concept of eco-friendly legislation to a new level. The Law of Mother Earth, now awaiting passage through Bolivian legislature, will grant nature equal rights to humans.

The law states that Pachamama, a living being in her own right according to indigenous thought, “is sacred, fertile and the source of life that feeds and cares for all living beings in her womb. She is in permanent balance, harmony and communication with the cosmos. She is comprised of all ecosystems and living beings, and their self-organisation.” According to one website, eleven rights will be codified: they will include the right to life and existence; to continue vital cycles and processes without human alteration; to pure water and clean air; to balance; to be free from pollution; to not have cell structure modified or genetically altered; and most controversially, “to not be affected by mega-infrastructure and development projects that affect the balance of ecosystems and the local inhabitant communities”. The government is even expected to establish a “ministry of mother earth”, appoint an ombudsman and empower local communities to scrutinise industrial activity.

There’s a balancing act here for Morales. On the one hand, there is clearly a powerful social movement which has a firm foothold in Bolivian politics, and there’s a lot to be said for giving the people what they want (British politicians take note): on the other, the overregulation of industry could prove an economic minefield; over a third of the country’s foreign currency comes from mining companies, for example, and it could well prove an obstacle on the country’s road to development. It probably won’t bring industry to a halt (it hasn’t in Ecuador, where nature has some legal rights but where industrial processes have still damaged substantial regions of the Amazon basin), but it will make it harder to exploit the country’s rich and valuable natural resources.

But maybe, just maybe, that’s not a bad thing. Every global climate change conference seems to involve developed countries like the US and UK, safe in their own positions, hypocritically telling developing countries such as India or even China to stop trying to become developed countries in the same way that they did – by pillaging their resources and developing along a trajectory that is as unsustainable as it is destructive. The fact that we are so protective of the remaining countryside that we have, especially in the UK, belies our underlying guilt. Ideas which could form part of a programme of sustainable development may be the subjects of on this site, but are proving difficult to sell to many economies and are still far from becoming the norm. Perhaps it’s quite refreshing that there is at least one willingly underdeveloped country in the world, which will not jeopardise its environment for the sake of capitalism.

Then again, it’s fair to wonder exactly how this law will be interpreted and enforced; the law is by its own nature abstract and complex, but add in an earth spirit who can’t speak for herself and the chances are there will be more problems to come. With poverty rife, lack of healthcare and wide regional disparities in both wealth and literacy, the argument for economic development is also powerful and should not be ignored. I’d like to think that equality means that Pachamama’s rights won’t come at the expense of those of humans; even better, that they will encourage a process of sustainable development to which the rest of the world can look for an example.

I’m inspired. I may set my grandmother back to work on that ozone-hole cover.