Macron and the fate of Europe

It is often said that Europeans will never be serious international actors, in contrast to the US, because they do not have the will to be so. Emmanuel Macron is the latest prominent European to make an argument along such lines by calling NATO “brain dead.” However, Europe’s limitations on the international stage are, to a huge extent, rooted in an excess of will. The problem is that the will is dispersed between many nations who can agree on little. This problem is often recognised but misrepresented as a clash of nationalisms, of individuals asserting an introspective national interest at the expense of broader projects. Rather, these problems can be identified within the realm of historical aspirations to different European visions. Holy Roman Emperor Charles V was once told that “God has set you on a course to world monarchy.” God is no longer the puppet master and monarchy no longer the goal. The universalist aspirations, however, have gone nowhere.

We are prone to denying ideas the centrality they deserve in accounts of the shaping of Europe. Politicians habitually appeal to economic practicality of policies: a central sticking point of Brexit has been the economic chaos it will produce. Politicians are by no means alone in giving prominence to impersonal forces. Commentators are keen to emphasise Europe’s limited GDP relative to the US and Germany’s flagging growth rate. Grand historical narratives have little space for ideas as a distinctive feature of European civilisation. Best-selling historians Niall Ferguson and Paul Kennedy emphasise the geographical limits to the realisation of European unity: the numerous mountains of the continent made it impossible to extend military powerful in the manner possible in comparatively flat China; the numerous rivers of Europe, contrasting the only three major rivers in China, facilitated regular invasions by perpetrators like Vikings which stimulated the defence capabilities of smaller communities. In such readings, smaller communities were increasingly viable and unified ones were not because of the shape of Europe.

These arguments are problematic and only half the story. Firstly, the idea that smaller communities became more viable because they were regularly challenged shades into an almost social Darwinist view of biological stimulus and response. Secondly, what was it that was motivating men to try and achieve a universal state? If they could survive as smaller units, what made them reject that viable and comfortable lifestyle in favour of loftier aspirations?

A festive story gives us our answer. On Christmas day, 800, Charlemagne was crowned the first emperor since the fall of the Roman Empire in the west in the fifth century. His coronation ceremony was modelled on that of the Byzantines, the descendants of the Romans to the east. But as much as Charlemagne was Roman, a renowned soldier who expanded his empire deep into modern-day Germany, Italy, and Spain, he was a Christian. Crowned by the pope, upon his shoulders lay the hopes of a religion that claimed universal authority (the word ‘Catholic’ itself means universal). It was on this day that what would come to be called the Holy Roman Empire was born. The ideological appeal, both Roman and Christian, compelled Europeans to established universal empires.

But managing his vast territories proved an impossible task for one man, so by Charlemagne’s death in 814 he had divided his empire between his sons. They would violently battle for his inheritance until 843 when they formalised the division of his empire into distinct Frankish (French) and German entities in the Treaty of Verdun.

Charlemagne had, in effect, left multiple contenders for the crown of a unified Christendom. Once they had expelled the Islamic presence in the Reconquista, a centuries-long proto-crusade which only hardened their universal Christian aspirations, the Spaniards were keen to join French and Germans in the contest for European mastery. Charles V, the Habsburg ruler of Spain and Holy Roman Emperor, made a famous unsuccessful bid for universal monarchy. One of the key reasons Charles was unable to sustain his vast swathes of land was the French king Francis I’s parallel ambition to inherit Charlemagne’s crown. Though he was denied the office of Holy Roman Empire by the electors he persistently pained Charles V, sufficiently so that by 1544 the Habsburg lord conceded huge swathes of territory to Francis in the Treaty of Crépy. The circumstances were not dissimilar to those in the eleventh-century German empire which saw violent divisions between loyalty towards the German emperor and the papacy, both of whom saw themselves as the leader of universal Christendom. 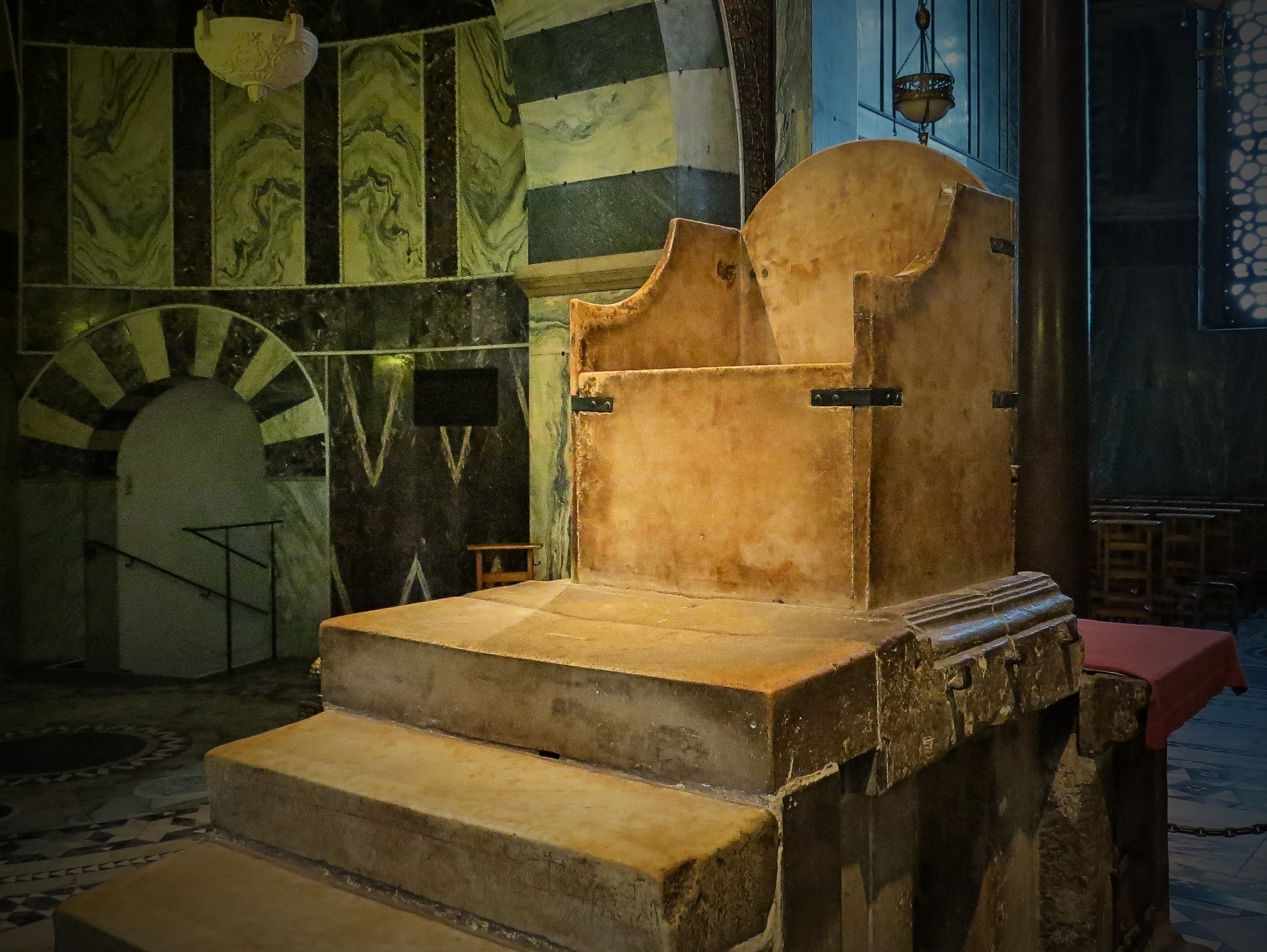 The throne of Charlemagne at Aachen. Image by Marek & Anna. Available on Flikr under the Creative Commons 1:0 license.

On this note, we turn to Charles de Gaulle, a copy of whose memoires sit on Macron’s desk. Louis XIV and Napoleon were among his favourite French leaders, partly for the strength they conveyed but mainly for an ability to establish consensus which he identified in them. The French contemplation of ideals on the world today seems to strike a similar note. Macron listens carefully to the historian Thomas Gomart. When asked about the EU’s role on world stage he notes that it is the world’s largest market but a “prototype political construct” and “a system currently weakened from within”, restoring “cohesion” should be the president’s priority. A desire to create a European workable order, a consensus, remains at the heart of French aspirations.

De Gaulle shared more than his Christian name with the men discussed above. His bid for higher power on the world stage – even seeing him anticipate US President Nixon’s 1972 opening to Beijing by attempting to contact Mao’s China – shook NATO to its core. This was his ‘politics of grandeur’, a serious threat to the post-1945 alliance systems. However, the joint French-German frustration with the US, who they both felt overlooked the security concerns of each nation, prevented divisions from opening up too sharply. But they may now. Macron now seeks a détente with Putin and simultaneously talks of ‘European sovereignty.’ In other words, he seeks to define his own foreign policy as that of Europe’s, aspiring to act as a united people as so many of his European predecessors have. But from Berlin, we hear expressions of dissatisfaction with the policy Macron claims to carry out on behalf of all Europeans.

Macron clearly has ideas for his country. But France sets limits for itself by insisting on acting on behalf of a continent which it cannot unite behind it. Napoleon was gullible enough to believe that he had united (or subdued) all Europe under his empire. His crowning act of hubris was his marriage to the Austrian princess Marie-Louise in 1810. It did not mark Austrian affirmation of Napoleon’s dynastic ambitions and plans to consolidate a pan-European empire as he believed. Rather, this arranged marriage was used by Prince Klemens von Metternich to gain a closeness to Napoleon which allowed him to predict his moves, reduce indemnities on Austria (freeing her to re-arm) and initiate the organisation of an alliance system which would end Napoleon’s reign by 1815.

Napoleon died in exile, as did Pope Gregory VII who battled the Holy Roman Emperor for universal authority. Louis XIV died after defeats so decisive that he renounced virtually all his prior ambitions. Macron’s ambitions may not be as lofty or militaristic yet they are of the same character: the aspiration to speak for all Europeans. The most dramatic moments of European history teach us that those who claim to act on behalf of the continent have unsuccessful careers. Metternich and Francis I were just two of hundreds of prominent European actors who thwarted plans for unified governance. But it was not for a sense of nationalism, a maxim he eschewed, but preference to the European model that had gone before him that Metternich engaged in his quest to topple the Napoleonic Empire. His sense of European identity was a pre-nationalist one shared by many who owed to the origins of the continent as Christendom. As late as 1800 the philosopher Johann Gottlieb Fichte wrote “the people of modern Christian Europe may be regarded as a single nation.” Given how Europeans of the past opposed unified continent based on broader recognition of a less centralised model, is it possible to rethink the ‘nationalism’ of Euro-sceptics like Salvini and le Penne? Might the ease with which they can cooperate attest to a deeper psychological and cultural unity?

It is the fate of Europeans to perpetually aspire to greater unity and grandeur whilst constantly modifying their approaches. For this reason, Macron’s utterances have something of a tragic element, seeming little more the turning of another page on the calendar. Napoleon is alleged to have said that “imagination rules the world.” He was as mistaken here as he was in his trusting Metternich. As Europe’s history shows us, the world is not ruled by one but a vast sea of imaginations. Macron’s legacy will be determined by whether he realises this reality before or after his fall.