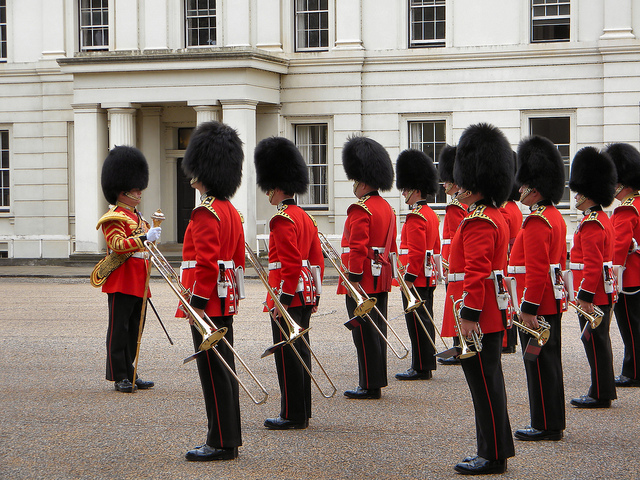 Changing of the Guard at Buckingham Palace

As many great cities in the world, London has its own dark secrets and famous traditions. Within the maze of narrow streets filled with ancient history, there are dark corners of supernatural myths and interesting stories. Some are scary ghost stories that taunt and bewilder whilst others are age old traditions that narrate London’s history. Walking in the streets of London, these legends and customs give the city sparks of life, sprinkling it with the golden dust of history’s magnificence.

Stories of the supernatural colour many areas of London and they are recorded in the paranormal database. One of the most well-known ones is that of the fiery sword in 1832. 1832 was the year of the great cholera epidemic and thousands witnessed a burning sword hanging over London. Another large-scale supernatural legend was the darkness all over London on 19th August 1763. It was said that London was covered by darkness for a short period of time during the day and that it was blacker than an eclipse. Not only are there records of large-scale supernatural events, there are legends of ghost-stories throughout London! In a private residence along Essex Road in 1975, a witness reported that a ghostly old man with a white beard wearing a dressing gown would stand at the foot of their bed. Even though the cellar door would be bolted closed each night, it would be opened by the old man. A more recent event is in 2008, which is a man’s strange encounter with a hairy creature in Epping Forest, Wanstead. During an evening fishing trip, Michael Kent reported that he encountered a dark hairy figure around 4 ft tall. The creature vanished into the bushes.

Although these supernatural phenomenon have no scientific basis and they could simply be a trick of the mind, Steve Round took these legends to heart and wrote a book called ‘London Lore: The Legends and Traditions of the World’s Most Vibrant City’. Steve Round, the honorary librarian for the Folklore Society, organizes the book in a geographical way, which is helpful for readers who want to navigate through the myths in London. One of the myths explored in the book is the false belief that Bleeding Heart Yard in Hatton Garden is given its name because the Devil ripped out Lady Elizabeth Hatton’s heart there in the 1500s. Or, in another version, the Devil smashed Lady Elizabeth’s brains out on the pump in the yard. Round is also intrigued by general superstitions, such as the well-known dispute that if the ravens leave the Tower, misfortune will fall upon London. Unlike the common idea that this is an ancient legend, Round argues that its earliest reference is in 1953 and that it’s an example of ‘tourist lore’, which means that it is cunningly conjured by tourist guides to create interest. Round also gives a fascinating addition to the superstition. He mentioned that there was menagerie at the Tower between 1235 and 1835. In 1252 ‘the King of Norway gave Henry a ‘pale bear.’ The ‘pale bear’ is likely to be a polar bear and the bear was often seen sitting on the banks of the Thames catching fish.

Not only is London full of supernatural myths and legends, it also has deep-rooted traditions. One of the most popular of London traditions is the Changing of the Guard. Interestingly, State Opening of Parliament is a part of the medieval traditions. In the ceremony, clergy and peers wear traditional robes. Since the Guy Fawkes incident, royal bodyguards, founded in 1485, have searched the cellars of the Houses of Parliament. Another famous London tradition is Trooping of the Colour, which takes places in June and marks the ‘official’ birthday of the Queen. Like Changing of the Guard, Trooping of the Colour has historical roots. In the early 1700s, the Colours or Battle flags were used to identify if troops were enemies or not.

Naturally, these brief examples of London legends do not exhaust London’s numerous tales and traditions. Although these folklores and customs have no scientific importance, they are important to London itself and it gives it a kind of cultural identity. One can also analyse this from a social point of view: why are these customs and superstitions created and sustained? Also, what are the effects of these superstitions and folktales to the psycho-geography of London? Myths do have its unique value and it is important that they are preserved as a part of London’s history. In some developed cities, such as Hong Kong and Shanghai, their cultural heritages are slowly diminishing as society progresses and new buildings are being built. Myths that were born in the tides of history are forgotten amidst a city’s tall buildings and scientific development. However, myths form part of a city’s identity and it is these hidden corners that give a place its enchanting powers.