Life in the Big(ger) City: Schools 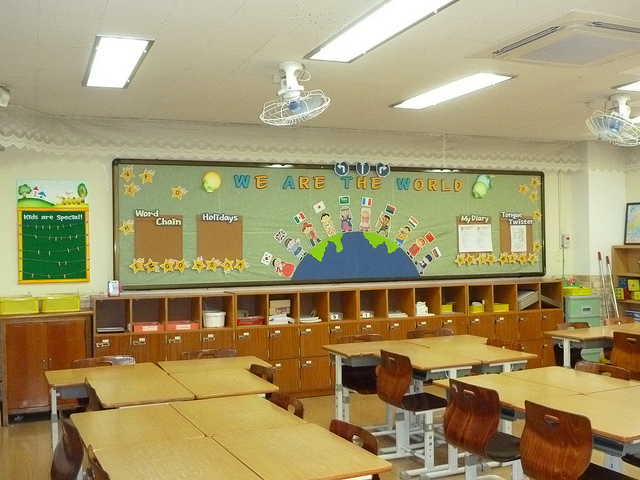 The whole class is hiding in a cupboard.

Although I’ve got a few weeks left to go in Austria, this week I bade farewell to my schools for the last time. As expected, leaving them was a bittersweet experience – on the one hand I’ll be glad not to have to get up at seven in the morning anymore, but on the other my teaching placement has been a crucial part of my Viennese experience.

For one, the schools have shown me, quite literally, a different side of the city. They are located in the south west of Vienna, an area rarely visited by tourists, and the view of Schönbrunn Palace (the one tourist attraction in the area) from the tram each morning has been a delight – even if the tram ride itself has not!

They have also prompted me to find out more about Britain. “How many countries are in the Commonwealth?” I was asked one morning, and had to admit to my cluelessness in front of thirty pupils – Definitely not what I signed up for, and definitely a hint that I needed to plan my lessons better. However, unlike when writing university essays, it’s OK if all of my lesson plans are based heavily on information from Wikipedia, and when my students are done putting me on the spot about the NHS, the Royal Family, or the components of a full English breakfast, I get to quiz them back. It’s a chance to see Austria from an insider’s perspective, and it’s been invaluable in writing my Year Abroad essay. (I swear, I only slipped it into conversation once, how was I to know that the class had just studied my chosen topic in depth?)

And finally, the students can be quite hilarious. Whether it be language slip-ups (like the student who confused lucid dreaming with “liquid dreaming”), April Fool’s Day pranks (when my entire first form class attempted to hide in one very small cupboard), or just class clowns (in a role play last week a student playing an immigrant took it upon himself to invent a sixteen-syllable Arabic-sounding name. And memorise it. And insist on being called by it for the rest of the week), no day has ever been the same. I was going to say that no day had ever been boring, but then I remembered the day I helped to mark Matura (A-Level equivalent) exam scripts for what felt like every student in Vienna. Even then though, I somehow managed to be crowned comedy queen, completely undeservedly I might add. All I did was ask if I could highlight an entire script when asked to highlight the mistakes in it, but then maybe the Austrian sense of humour is slightly different to the British one. Either that or exams make teachers just as crazy as they do students!

So it’s for these reasons that I’m sad to be leaving my schools, but I know I won’t forget them in a hurry – the numerous ex-students who’ve just added me on Facebook will make sure of that.