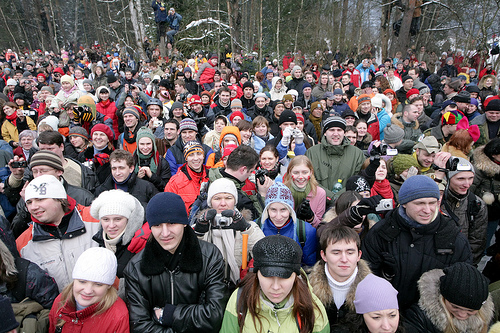 Luckily, the Russians aren’t this cold on the inside

Seeing as my last column was about my struggle to leave Russia, it seems only fair to the land which was my home for nearly four months to write now about why I can’t wait to return. Unfortunately, I don’t know when I will next have the means, or the excuse, to visit, but one thing’s for certain – I will be back! I also feel duty-bound, having said some slightly unpleasant things in the past about the friendliness and optimism of the Russian people, to salvage their reputation somewhat.

Russians believe in getting as much profit as they can out of an investment. This means that they won’t pretend to be your friend, unless they actually want to be your friend (or they think they can gain something from the friendship). But once the initial barriers are down, they are extraordinarily generous. The weekend before I left Russia, I was shown exactly how generous and hospitable Russians can be, as I went on a visit to a friend’s home town. It was the most confusing and exhausting two days of my entire time in Russia, but it was worth every minute.

Nikita, the friend in question, went out on a limb to make me (and fellow Year Abroader Tom) feel welcome, introducing us to his family, his friends, and the beautiful town of Vologda. His mother, a slightly eccentric character who spent most of the day sitting at the kitchen table in her dressing gown chain-smoking and doing Sudokus, took it upon herself to feed us as many home-cooked meals and Vologdan dairy products (the town is famous for them) as possible, looking rather offended when I refused my third glass of kefir (Russian fermented yoghurt drink). She also made sure that Tom and I were dressed warmly enough, deciding that my pride and joy, the fake fur coat bought in St. Petersburg’s biggest department store, wasn’t warm enough and that I should wear one of the Michelin man monstrosities favoured by Russian girls everywhere. Imagine sewing two duvets together and covering them in polyester and you might get the picture. It’s not a good look. It is, however, incredibly warm, as Nikita’s mum promised, which is exactly what you need when the average outdoor temperature is -25°C.

The few dozen young Russian students at the party we attended that evening were also incredibly welcoming – although that may have been partly due to the power of alcohol. It certainly did wonders for my Russian, or at least for my willingness to use what Russian I had already learnt; I had an absurd tri-lingual conversation in English, French and Russian, with Nikita’s friend Katya. I was also introduced to one of the stranger Russian traditions – if you compliment a person on something they’re wearing, they feel obliged to give it to you. Thus, I ended up swapping my belt for some rather attractive earrings. It seemed like a good idea at the time, but I regretted it when I remembered that I had actually been wearing the belt for a reason…

Visiting Vologda was a wonderful way to spend my final days in Russia, reminding me of why I want to come back and, hopefully, giving me a place to stay when I do!