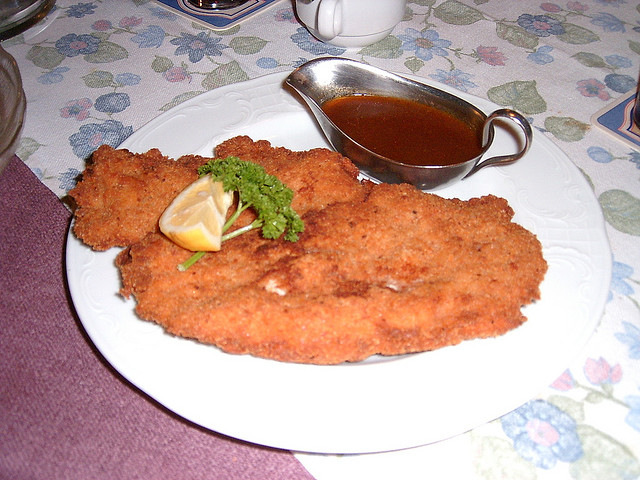 No noodles in sight. Doorbells and sleigh bells just out of shot.

To return to my earlier column on Austrian stereotypes, the Sound of Music teaches us that one of the Austrians’ favourite dishes is “schnitzel with noodles”. But what do we really know about Austrian food? And how much of it have I managed to sample during my three months here?

Firstly, schnitzel with noodles does not exist. Schnitzel, a breaded cut of meat, traditionally veal, but in practice usually either pork or turkey, is commonly eaten in Austria, but not usually with noodles. Instead the schnitzel is eaten either alone (and if you order it in the better restaurants, it requires no side orders), with a Semmel (a bread roll which turns your schnitzel into a schnitzel burger), or with whatever side order you desire, Pommes (chips) and Kartoffelsalat (potato salad) being the favourites.

Austria is also, like Germany, famous for its sausages. The Würstelstand, or sausage stand, is a Viennese institution, providing the city with food (and beer) long after other food outlets have closed their doors. Many of the sausages sold there, such as the Bratwurst, will be familiar to German sausage aficionados but the Austrian speciality is the Käsekrainer, a sausage filled with melted cheese. My flatmate is determined that I will eat a Käsekrainer before I leave Vienna, but she is equally determined that I can’t eat it sober, which confirms my suspicions about this particular delicacy. Hopefully, the accompanying Semmel and dollop of mustard will make it bearable, along with the beer goggles of course.

But what Vienna is really famous for is its Kaffee und Kuchen (coffee and cake), something which I need no beer goggles to appreciate. First on the list of delicacies is apple strudel, which most people have tasted at some point – although you haven’t truly lived until you’ve tasted the Austrian version. My second favourite Austrian dessert is Kaiserschmarren, something which is almost impossible to describe to someone who hasn’t tasted it. Essentially, it’s a sweet omelette with raisins in, cut into bite-sized pieces and served with plum jam. However, this description does it absolutely no justice, and again, it has to be tasted to be believed. And finally, there is Sachertorte, perhaps the most typically Viennese dessert, and yet also the least inspiring. Created by a chef at the Hotel Sacher (and sold only there in its original form, although different versions are sold at cafés all over the city), it is a chocolate cake covered in apricot jam and melted chocolate. However, it has an unfortunate tendency to be slightly dry, not to mention extremely overpriced, making it a close second to the Käsekrainer in the list of least recommended Austrian delicacies.

No doubt, having spent a large amount of my time in Vienna cooking pasta with pesto in the safety of my own kitchen, I will have missed out on a few national dishes. However, given that being cooked for in Russia meant having to swallow mouthfuls of cold fish at least once a week, I’m glad I went for the self-catered option this time around. There’s only so many local delicacies that one stomach can handle!