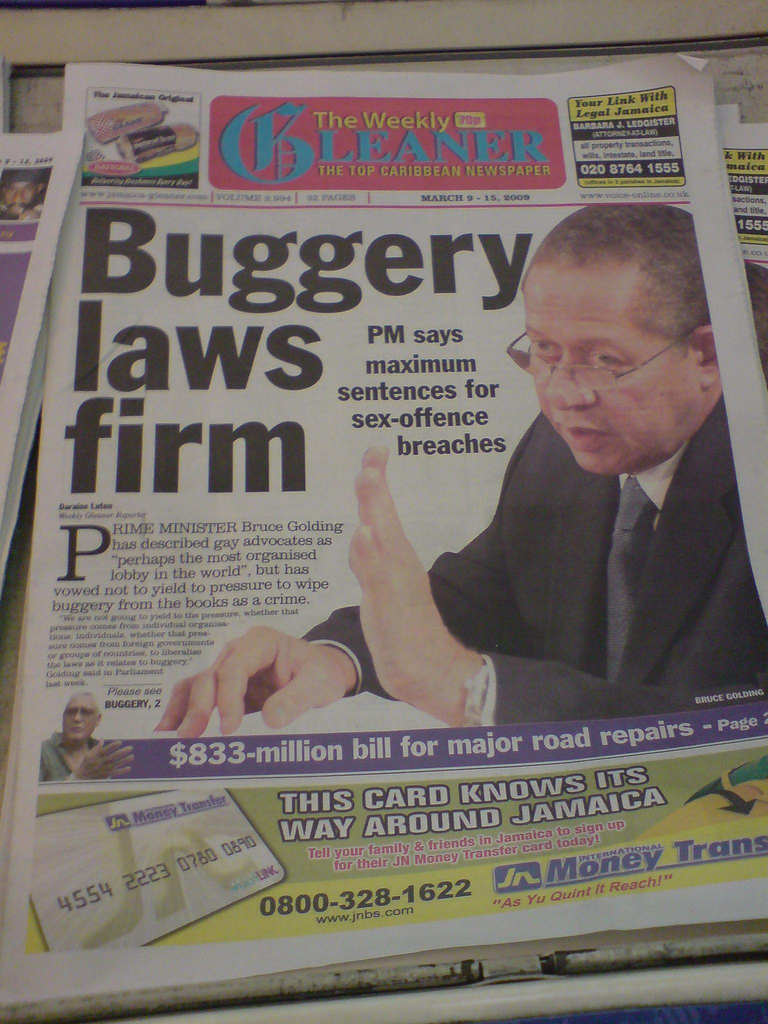 It may not always be this obvious, but homophobia is still a very real problem

When I was fifteen I was beaten unconscious, all because I’d “defended dykes”. When I was twenty, my work colleague pulled a knife on a “faggot”, because he was “insulting” the Kop by wearing a Liverpool shirt. At times in Durham, whether it be because of the thriving LBGTA community, the warm college environment or the “anything goes” attitude of university, it’s easy to forget just how deeply ingrained certain forms of homophobia remain in Britain.

In the past year, 15,000 children have been the victims of homophobic bullying, with nine in ten teachers having been witness. Cases such as Michael Causer (stabbed to death in Liverpool in 2008 because of his sexuality) continue to haunt the news. He was eighteen. Only last week, it was reported that over a quarter of gay people in Northern Ireland have experienced homophobia at work.

We may no longer live in the 1990s, a decade when over half of the adult population viewed same-sex relations as wrong, when Lord Hailsham described gay practices as a “corrupt and corrupting vice”, and a local councillor advocated sending “90% of queers to the ruddy gas chamber” (one wonders whether he saved the remaining 10% for fun) but make no mistake – homophobia is still very much alive.

When then, in response to a pro-gay article I’d published in this magazine, I was accused of leading “vulnerable youngsters” into a life of “moral degradation and sin”, I was curious to hear the reasoning behind my fellow student’s prejudice and ask whether he thought Iris Robinson (Irish Ulster MP) had really been right three years ago, to compare homosexuality to child abuse. It certainly made for an interesting cuppa…

“Leviticus 20:13 clearly states that in conducting same-sex relations you are committing an abomination.” I couldn’t resist pointing out that (technically) lesbians are not covered by this passage but pedantic lawyerly arguments aside, the debate surrounding biblical interpretation stretches far beyond the scope of this article. Suffice to say, if we take the law of the Lord to be perfect (Psalm 19:7), all of us who rush to complete an essay on Sunday night must be put to death (Exodus 31:15). Indeed, Matthew 19:11 (“for there are eunuchs who have been made so from birth….let anyone accept this who can”) and the early Church’s inclusion of homosexuals both appear to point towards acceptance.

Quickly realising my theological knowledge matched my gayness (blame my God-fearing grandmother – normal children have “Letterland”, we had the Bible) he submitted that even if homosexuality is genetic, this does not (in itself) offer a justification. Alcoholism, a quick temper, even a propensity to rape: all have a hereditary basis but are still unacceptable in society.

With the greatest respect, this is a rather baseless argument. Alcoholism is not in itself illegal. Only when an activity harms another (as with rape) does society paternalistically intervene. Aside from Feinberg’s powerful argument that consensual acts cannot ever be said to harm, beginning from a basis that such practices are wrong and that justifications are needed in order to make them right, reverses the very principles on which our society is built.

“We are all bent towards temptation. It is by acting on your lustful desires that you commit the ultimate sin.” Having been called a “player” in Klute the night before, I consoled myself on my one way trip to Hell with the fact that he’d at least recognised homosexuality existed. “Change is possible. One third of people, after undergoing therapy, lead a normal life.” I sipped my tea and bit my tongue very hard as he continued “homosexuality will destroy the family unit; sexual looseness will prevail.”

Despite homosexuality having been removed from the Psychiatrist’s Glossary of Conditions nearly forty years ago, one in six UK therapists has tried at some point to change their patient’s sexuality. Homosexuality is not a mental illness; people do not choose to become gay when they are depressed. Neither it is because you’ve had a difficult birth or have Freemasons in the family. The fact is some people are just gay.

As for individuals being successfully “converted”: I ask you – how many times have you said “yes” just for an easy life? How many people truly stand up for what they believe in? If someone is told enough times they’re mentally ill; they will come to believe it. I’ve led a straight life myself but as one patient who’d undergone such “therapy” attested many years later, it’s “psychological torture”.

“But 5% of homosexual teenagers ‘turn’ before they reach twenty.” And? Bisexuality is as much a norm as homosexuality. Just because teenagers go through “stages”, this does not somehow disprove that homosexuality exists. Sexuality is a fluid spectrum. True equality will be achieved the day one can fall in love with a man one day and a woman the next.

To suggest that such equality will somehow lead to sexual perversion on a grand scale (a favourite Anita Bryant argument) brings to mind Voltaire’s famous dictum – “prejudice is the reason of fools”. The fact that men “sowing their seeds” is as much celebrated in heterosexual culture as gay men are derided for it, shows clearly the struggle the LGBT community faces in dispelling ingrained stereotypes. Olivia Amos’s powerful critique of the heterosexism within our law () is spot on – gay couples are not second-class citizens and their commitment should not be treated as such. God may not have created Adam and Bruce, but neither were Adam and Eve married.

“But children should not be exposed to homosexuality.” The gay community is not an alien world; it is made up of normal people living normal lives (the odd “character” thrown in for good measure). Allowing children to interact and realise that such relationships are par for the course, is the key to community harmony and stability, promoting God’s wish of procreation and ensuring children are raised in a loving environment.

As my girlfriend walked in, I asked my interlocutor, “is lying a sin?” He nodded. “Well just as I’m encouraging people to live an open and free life, you’re encouraging them to live a sinful lie. Homosexuality is not a choice. Whether you’re straight, gay, bisexual or whatever, at that moment in time that is who you are. I’m as much a lesbian as I am a left-handed Scouser. Sure, I can take elocution lessons, try and write with the other hand but then the fundamental question becomes do we want to live in a society where individuals are suppressed beyond all recognition?”

I shall leave that question for the reader. Suffice to say that whilst homophobia may seem a world away from the cobbled streets of Durham and the opinions expressed here may (thankfully) be obvious truths to many, prejudice is still very much alive in this country. A culture of heterosexism, backed up by the law of our land, fuels the homophobic “banter” on our streets. It is such “banter” which translates into unacceptable hatred, leading men to pull knives on each other based on little more than the gender of their partners. Homophobia has to stop. End of.