Harriet Mallinson in Columns on 7 December, 2011. 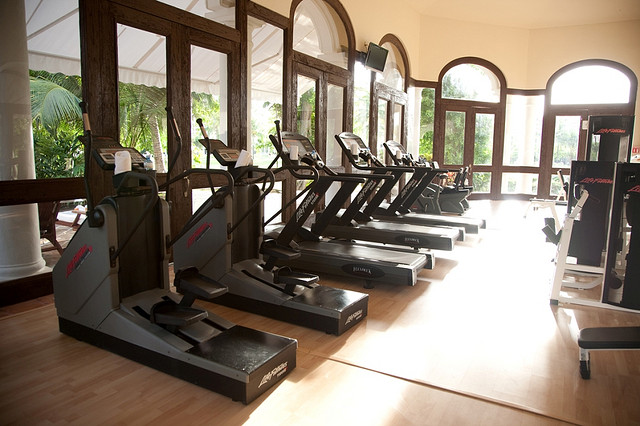 Sure, it looks innocent enough now.

My gym virginity was taken late in life, during my second year in Durham. Filled with a new year’s desire to get fit I began accompanying my housemate to the Radisson Hotel gym. The diverse clientele consisted of students just like me and middle aged men who were staying in the hotel. In short, there was absolutely no talent whatsoever… Not that I didn’t enjoy sitting one on one in the sauna with an enormous, sweating, mostly naked 60 year old of course…

However, this five month long relationship with the small Radisson gym just wasn’t enough to prepare me for its equivalent in the French town, where I live now. From the outside it looks retro, dingy, and distinctly dodgy. Meanwhile inside there are rows and rows of machines many of which definitely resemble instruments of torture. When my friend Ivy and I entered for the first time I definitely felt out of my depth. The running machine, the cross trainer, the bike – yes… But what in God’s name was everything else for? I ended up following Ivy around the gym like a love sick adolescent hanging on to her every instruction before I could dare clamber aboard a machine.

Before I go much further I must explain that here in Niort, the gym itself is the men’s domain, while the workout classes, held in the adjoining hall, is the women’s. It seems there is some sort of unspoken rule that the two are never mixed, reminding me of those Victorian establishments where there were two separate doors for the different sexes. Nevertheless, us brave Anglophones have somewhat unsettled the equilibrium by straddling both worlds. The minute we stride into the gym, a dozen pair of male eyes swivel towards us. Yes I know that men will stare at women wherever they are… But here it’s a different kettle of fish. We have invaded their territory; the audacity! Thankfully after a month’s membership they seem to finally be accepting us. I actually managed to befriend one of them one day…he informed me I was using a machine wrongly… But I feel it was a bonding moment none the less.

Facially these men are nothing special but I could spend hours looking at their bulging biceps. Although are the ridiculous noises they make whilst weight-lifting really necessary? One man whom I’ve noticed on several occasions genuinely sounds like he’s having very forceful (and slightly painful) sex. It was funny to begin with, but after fifteen minutes of solid groaning the humour definitely dwindled.

It is the workout classes, however, that provoke the most hilarity. Considering the average age is about fifty-five, my two gym-going friends and I stick out like sore thumbs. Nothing, however, could detract from the absolutely incredible outfits that these women wear. Ivy labelled their clothes as something from an “80’s exercise porn video”. My particular favourite is one woman who sports horizontally striped red leggings with a grey thong over the top. I mean…WHY? How does this aid your workout in any way, Madame? A wedgie is probably the least desirable thing when doing step aerobics. In fact, the women are dressed very much like those in Eric Prydz’s famous video of “Call on Me”, only the non-sexed up version. Hilariously there is a male fitness instructor who I’m positive all the women are enamoured of, as they frequently morph into giggling school girls when he comes near them. However, we have noticed that several times in the forty minute session that he comes over to us three to rearrange our legs or clarify instructions. This could because we simply are very bad at his classes and our fitness levels are shockingly low… But a girl can hope. An awkward moment occurred the other day as we were leaving the building and we passed him by in the corridor. He held up his hand in a wave which Ivy crazily interpreted as an invitation to a high five…Only he withdrew his hand at the last minute due to confusion. Luckily the exchange was rescued by a nifty fist bump (really, Ivy?) but we’ve yet to attend another of his classes!

Watching music videos constitutes a large part of my attendance at the gym, and this has not been a wholly positive experience I’m afraid to say. Must the music channel ‘NRJ’ (wittily pronounced ‘energie’) play the same songs almost every time I go? I’ve had it up to here with videos about men living the high life surrounded by gorgeous women. Google “Welcome to St. Tropez” by a certain DJ Antoine if you want to see what I mean. The way these artists use music videos as an excuse to portray a super cool life: champagne, yachts, exclusive clubs etc., is verging on ridiculous. Furthermore, videos such as ‘Rain over Me’ irritate me: Pitbull, standing in a desert and waving your arms about does not make you cool. Despite these complaints the TV situation is infinitely better there than at the Radisson. I don’t know who was in control of the remote there but boy they had terrible taste. No, I don’t want to watch an emotional yet terrible hospital programme or ballads of the 80’s. I’d choose Pitbull any day. He does have a stupid name and I’m not one for bald men but he does have a very nice and sexy voice.

I’m subscribed to this gym for another five months and I like to think that come April, not only will my fitness levels be out of this world, but I’ll have made some actual friends there. How I wish one of those thong-wearing women would take me shopping…