Language Students: Why Graphs Should Be Your Friends 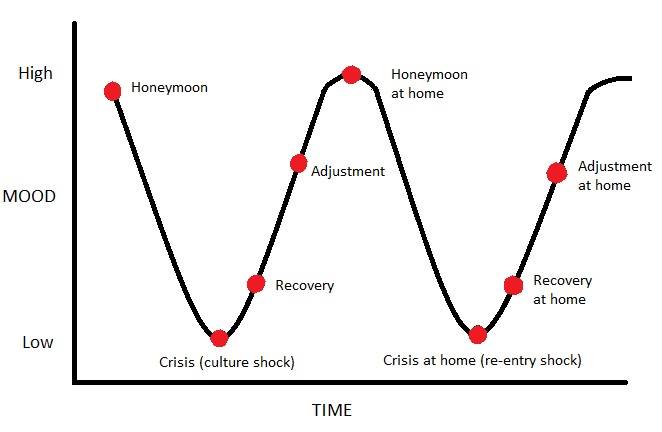 At the risk of sounding like an overused internet meme which may have been funny way back at the dawn of time but now makes you want to plunge your entire face into a camembert in sheer despair: you know you’ve been on a year abroad when several months down the line, you’re sitting at home nostalgically googling pictures of the Paris metro, or weeping profusely over the Autumn menu at Café Rouge.

You may think that the stress of actually working again is getting to you (apparently one 1000 word essay written over eight months doesn’t count), or that your tear glands are being forcibly shredded by the icy chill of Durham in November, or that you just really really miss that morning pain aux raisins. But the chances are that your sobbing fits, hours of staring whimsically into space and tendency to brood over used metro tickets are simply the symptoms of culture shock.

This may sound extreme. I know that before my own experience I thought culture shock only applied to people who spent their year abroad as a missionary in Ghana or defusing landmines in the Middle East. I certainly never thought that somewhere as close to home or as familiar as France could have that kind of effect on me. I soon discovered, however, that a change of culture can be strange and unsettling wherever you are. The unfamiliar labels in the supermarket, the weird queuing system at the train station, the sheer panic at the end of a party when you can’t remember how many kisses lie in the perilously narrow safe zone between standoffish and overfriendly…

The interesting thing about culture shock, though, is that it happens twice. The first time you experience it is typically soon after your arrival in a new country; the second is when you return home. Personally, I experienced the second stage much more acutely than the first, probably because it was combined with inevitable feelings of regret for what I’d left behind in France. At some point over the summer, having found me once too often sitting at the kitchen table, sighing dramatically and gazing forlornly at the pot plant my Spanish flatmate had given me as a goodbye present, my mum presented me with a picture of a graph.

Personally, ever since GCSE maths I have broken out in a cold sweat at the mere mention of a graph, terrified that someone might ask me to calculate its cumulative frequency. However, once I’d got over the initial horror and remembered what an axis was, I quite liked this one. The W-Curve, developed by researchers at Minnesota University, is a graph designed to show the stages of culture shock experienced by those who spend time abroad. Of course, individual human feelings and emotions cannot be plotted on a graph, and everyone’s experience is different. But as a general guideline, it is very useful. It shows that the typical person goes through four distinct stages of culture shock – honeymoon, crisis, recovery and adjustment – a cycle which is repeated on returning home, when “culture shock” becomes “re-entry shock”. This certainly seemed familiar to me. I recognised both the process I’d gone through during my time in France, and the process which I now realised I was already part of the way through after my return.

As is probably not unusual, besides the odd moment of homesickness, I didn’t really have enough time to ever feel at “crisis point” when I was in France. Despite the initial wobbles of the first week, the “honeymoon” stage set in pretty quickly for me, and I found myself getting hugely excited about things as basic as French supermarkets and chatting to my flatmates in a mixture of French, English, Spanish and German. I never noticed a particular moment when my honeymoon stage ended, but there was certainly a tangible progression. After a while all the Dijon mustard and apricot croissants in the world couldn’t entirely smother the fact that I missed my family, my friends and my boyfriend, and it probably isn’t a coincidence that as Christmas got closer my English flatmate and I got through all three series of Downton Abbey and started desperately craving Parma Violets. But coming back to France in January felt like coming home, albeit to a third home that is a bit different, requires a bit more effort and will perhaps always be a bit of an unknown quantity. And, as is always the way, just when I felt I’d really cracked the French thing and was becoming a fully-fledged mademoiselle, it was May and time to come home.

I’ve lost count of the number of times people have asked me what it’s like being back in Durham. The answer is really very boring. It’s lovely, but it’s completely normal. It’s strangely easy to slip straight back into a routine and a place which you know so well. When I came home, as was to be expected, I had – and still have, sometimes – moments of intensely missing France. I miss the town I lived in, the friends I made and the little children I taught to sing Twinkle Twinkle Little Star. But for me, the most difficult thing about coming back home has been trying to reconcile the version of myself who had watched the cliffs of Dover vanishing over the horizon through a deluge of tears with the version of myself who stood on the deck of the ferry home, eight months later, straining her eyes to see the French coast for as long as possible before it, too, disappeared into the sea mist.

It is a well-rehearsed cliché that going on a year abroad will change your life. I am not going to claim anything quite as dramatic as that, but even I will say that I came back from my year abroad a slightly – slightly – different person to who I was when I first stepped onto that ferry way back last September. Living abroad, meeting so many new people and facing challenges as simple and yet as important as ordering a hot chocolate in a French brasserie gave me so much more confidence than I had ever had before, and I realised that a lot of people and situations weren’t nearly as terrifying as I’d always thought they were. It may sound trivial, but it has made a huge difference to me, and it is a difference which I don’t think anything but a year abroad could have left me with.

For me, that has been the strangest part of what the all-powerful graph calls “re-entry shock”: reintegrating with people who know a particular version of me, and finding that I instinctively revert to that version of myself whenever I am around those people. Reconciling the pre- and post-year abroad selves is not an unusual problem, but it is one for which time is the only remedy. Who knew that year abroad would continue to be a challenge several months after it ended?

At least I have my trusty graph to reassure me that it’s all normal. Just don’t ever expect me to find solace in quadratic equations.