Juncker’s liberal aspirations and their faults

American patriots had good reason to be optimistic in the wake of their Revolutionary War. The British army decisively defeated an entire continent lay westward, promising a bright future for the Founding Fathers who inherited the progressive aspirations of English Whig liberals. However, when James Madison wisely advised studying the ancient Greek Amphictoyonic League before construction of the new polity, he was a lone voice. We are most prone to forget past blunders when preoccupied with setting future goals. With this in mind, it is Brussels rather than Whitehall with the more disturbing, ill-defined future. In the wake of failure to keep a key member state in the union, Jean-Claude Juncker embarked on vague and damaging goal setting.

In his last state of the union address, Juncker veiled historical amnesia with vague allusions to catastrophic Europeans events. His words should ring alarm bells for a historian. He claimed that often, “history moves forward only haltingly but it is always quick to pass us by.” History does not ‘move,’ cannot adjust its pace; it is not an entity with agency but the academic study of change. If Juncker scarcely understands history, can he learn from it?

At face value, one may feel comfort at Juncker’s keenness to avert disaster, his conscious incentive to avoid crises like 1914. Less comforting is the similarity outlook to the Whigs, whose history reflected not reality but Victorian nationalism that legitimised colonialism. One such Whig, George Macaulay Trevelyan, held that “the transference of sovereignty from Crown to Parliament was effected in direct antagonism to all continental tendencies.” The Whigs saw two historical avenues; the first led to an ideal liberal paradise, the other to the kind of oppressive tyranny the continent saw in the 1600s whilst England progressed towards liberal democracy. In expressing his wish “to reject unhealthy nationalism and embrace enlightened patriotism”, Juncker struck a familiar note.

“We should be thankful we live on a peaceful continent, made possible by the European Union.” His worldview harbours the naïve assumption that we control the course of history. It’s a romantic idea; we love to think that brilliant individuals like Bismarck or Churchill ‘made history’. This was also a Whig common place. Trevelyan held that it was a group of uniquely heroic MPs opposing the unprecedentedly tyrannical house of Stuart that brought about Civil War. In fact, it had more to do with the growth of public debate, confused suspicion and deep anxiety on both sides of religious radicalism. History (by which I mean social change) makes great men; great men do not make history. Bismarck could not have unified Germany without the long-term shifting of economic balance in Europe away from Austria’s favour, Churchill could not have led Britain to victory had Axis powers not a) successively aggravated the USSR and USA, and b) established dictatorships on deeply flawed economic principles. It is the collective memory of the Nazi tragedies that has kept Europe together and made the EU possible.

This worldview is concerning, particularly if the EU is to have the sort of active foreign policy advocated in the speech. Juncker rightly spoke with sadness of China’s human rights abuses, but worryingly framed this in a drive to “strengthen our foreign policy.” Across the eighteenth-century Britain played a key role in subsidising wars against figures, usually Frenchmen, who they believed poised to establish a tyrannical continental empire. David Hume dissented, deeming the assumption of universality in opponents’ aim ill-conceived. The Whiggish justification for such an active foreign policy was a universal commitment to resisting arbitrary authority, unlimited by geographic boundaries. Hume aptly noted that this was a concept not present in other states’ foreign policies. 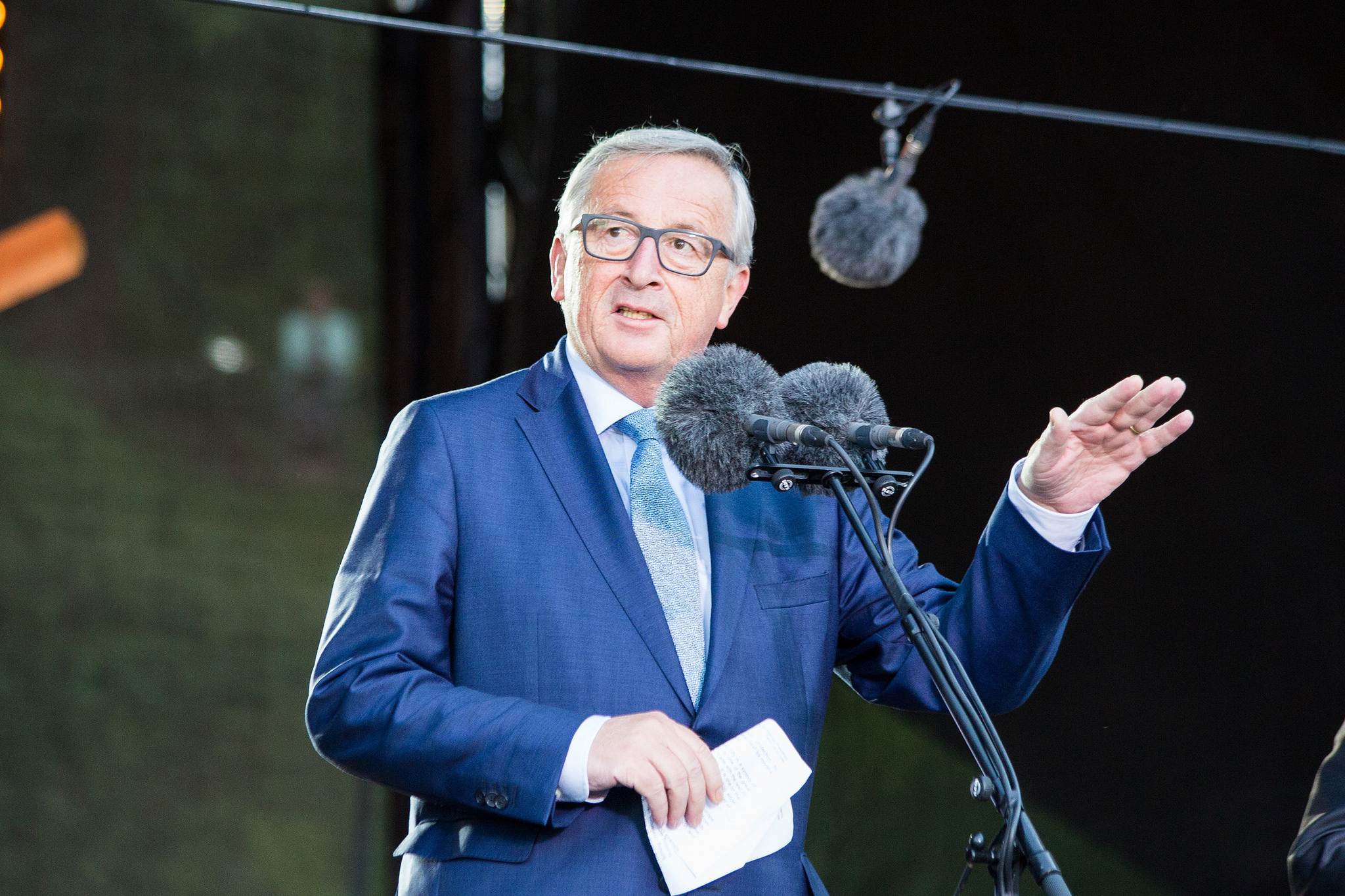 Two examples spring to mind of when Hume’s wisdom, far more nuanced than a Whig’s or Juncker’s, would have been valuable. Many voices, including Bill Clinton, rightly condemned the slaughter of peacefully protesting students at Tiananmen Square. However, Clinton’s attempt to isolate China from the west was damaging and undid the amicable Sino-US relationship fostered by Nixon and Kissinger. The problem was rooted in China’s confusion at Washington’s hurt at the killing of another state’s citizens. As Hume would point out, the Chinese outlook was not necessarily universal in the same way as the western one; careful consideration of this could have ensured a more effective response. The ferocity of Clinton and his ilk’s response was doubtless conditioned by the fear that such action confirmed China to have taken the historical crossroad to tyranny that Trevelyan thought England avoided in the 1600s.

The second example is far more worrying. In 1914, the erroneous assumption of universalism effected calamity. As Germany’s economic and diplomatic activity expanded, Britons feared Berlin was poised to conquer the world. When Germany launched war against France in an attempt to deflect an assault from Entente powers, against British advice, these fears seemed confirmed. In fact, Wilhelm II had no plans for world domination. The infamous September Programme that sought to annex northern areas of France, western Russia and other areas on the German border only materialised after British intervention. Not only did this hardly amount to world conquest, the concentration on coal-rich areas suggest the programme’s genesis was concerned with redirecting European resources against the new military threat of Britain, responding to its intervention.

The decision was a desperately anxious Kaiser’s and fatalistic chancellor Bethmann-Hollweg’s last attempt to unite an internally crumbling Germany they feared may be obliterated by Russia. The Whiggish outlook of historical development either towards liberal democracy or tyranny, expressed by Britons, Americans and currently by Junker, did not accommodate the situation’s nuance. Thus, Britain, with the full force of the Empire, allowed a conflict still limited in scale to escalate to an unprecedented European tragedy.

Juncker’s mentality, expressing aspirations of many Europhiles, is that of a man zealously attempting to avoid the follies of recent history yet blunderingly vulnerable to doing so. This Whiggish understanding of historical development is closely related to aspirations to progress, and has resulted in some disastrous policy decisions. Particularly when the EU takes unprecedented action to overturn legally made decisions of the Polish and Hungarian governments should these mistakes be understood. Both countries’ pasts are characterised by humiliating subordination to stronger neighbours, Germans, Russians, Austrians, Ottomans. Instead of making the Whiggish assumption that they are on the path to tyranny, the EU would do well to recognise the importance of these historical experiences which prompted the legislation Brussels opposes, which is concerned with protecting Polish and Hungarian national integrity. If Brussels’ firmness continues, Putin would surely provide a sympathetic ear. A polarised Europe awaits.

My questioning is of the practice, not spirt, of liberals’ foreign policy. We should work tirelessly to stop overt acts of violence and arbitrary bids for power. But we must remember that, despite hypocrisies, this was the intention of English and American Whiggish liberalism. In the pursuit of liberal ideals, atrocities against Native Americans, slavery, and the annihilation of a generation on the Western Front were collateral damage. We are still waiting to find out what will happen with the US and China. It is important for our leaders to understand history. It is the discipline of understanding social change, and it has more complexity than politicians seeking to sell themselves as ‘progressive’ accommodate. Hillary Clinton still holds that she offered an opportunity to step forwards, whilst Trump supporters were “looking backwards”, echoing the Whig’s dichotomy. Brussels should take note of what Clinton misses. To build unity, to build a union, one must emulate Madison and Hume; look both backwards and forwards.