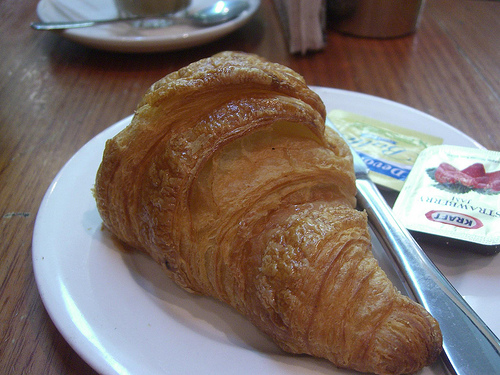 Does this constitute a proper start to the day?

It may or may not surprise you hear that I am a qualified EFL teacher. This means that last summer, I worked in three different countries, teaching English to students who had parents gullible enough to pay me an extortionate amount of money. What I learnt, aside from the fact that there aren’t any kangaroos in Austria, is that breakfast in Europe is terrible.

After having breakfast in Poland, Austria and France, I can now feel proud to be British. And so should you dear reader, unless of course you aren’t British; in which case this article will no doubt make you want to run to the citizenship office for a British passport immediately. The British, you see, do breakfast properly. I don’t have a fry up everyday, but I am glad that we have that option as part of our culture.

The Poles, Austrians and French all have extremely similar breakfasts, the so called “continental breakfast”, which has led me to think that this is the reason Hitler dominated their countries so easily. Each of them basically has cold bread and jam for breakfast. Sure the name of the bread differs; semmel (an Austrian cross between a bread roll and a croissant), croissant, Polish bread thing – but they are all essentially the same. All are cold pieces of bread in fun shapes, complete with different fillings, which ironically don’t actually fill you up. All I’m saying is that if the nationals living in these countries had a decent breakfast, they might have been able to fight off fascism better. Or at least be a bit more productive during the day, by not taking a two-hour lunch break to fill the obvious gap made from breakfast. I’m looking at you here, France.

One of the most depressing moments of my life came in Poland at the end of the school day, when I discovered they had put out polish bread thing with fillings for dinner as well. I initially thought that they had put out breakfast twelve hours early, but was informed that no, this was dinner. I actually cried. This, I think, is the sole reason so many Poles come to England – not because of work, but because of the need for substance at breakfast and dinner. Don’t let the Daily Mail tell you anything otherwise.

The Americans are pretty woeful at inventing things compared to the British, with their main claim to fame coming from inventing condensed milk, but they have redeemed themselves with “Brinner”. Simply, this is where you eat breakfast at dinner. What the Poles do doesn’t count as Brinner, because as I’ve already established, what they eat isn’t a proper breakfast. You can eat Brinner with pancakes – and that would be the American ones obviously, not the pathetic French ones which are flat and crucially NOT FILLING (notice the theme here). If you don’t want to honour our American cousins with their fine cuisine, then you can obviously do it with the English fry up. This is the best English-American collaboration since the alliance in WWII, and I would go as far to say that this is also the best dinner meal ever. No exaggeration.

As a nation therefore, we can be proud of our breakfast. Sausages, eggs, bacon, baked beans, hash browns and toast is the best combination of things since a producer combined 300 and Gladiator to create Spartacus: Blood and Sand. Having sausages and bacon at breakfast is not only the best cure for a hangover, but it makes you a more complete human being; literally because you have more inside you. I used to think that Brits who went abroad and just had an English breakfast were plebs. No longer. I now rejoice and embrace the great British fry up as one of our greatest inventions, comparable to inventing computers and fighter jets – and so should you.