I, Tiberius Claudius Drusus Nero Germanicus…this that and the other

Of the first five Emperors of Rome, Claudius’ reign has perhaps been subject to the broadest variety of assessment. With Suetonius’ description of a dim-witted savage on the one hand, and, on the other, Robert Graves’ benign, intellectual scholar from the historical novel, ‘I, Claudius’, as per usual, the reality likely lies somewhere between ancient orthodoxy and modern revisionism. 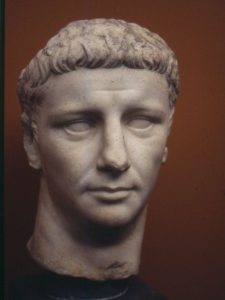 The son of Nero Claudius Drusus (Tiberius’ brother) and Antonia Minor (Augustus’ niece), Claudius was something of the Julio-Claudian black sheep. While his brother Germanicus enjoyed the highest military and political offices from his early 20s, Claudius was rejected from public office by and relegated to a fairly anonymous life throughout the reign of Tiberius. This was mainly the consequence of his perceived stupidity because of a number of serious infirmities, including a limp, mild deafness, stammering, a violent nervous tic and a running nose, which his family feared would make a laughing stock of them. Although modern medicine has retrospectively diagnosed Claudius with a variety of possible disorders; polio, cerebral palsy or Tourette’s syndrome, many historians, and indeed Claudius himself, have posited that the more obvious symptoms were deliberately exaggerated.

Whatever the causes of his afflictions, they certainly played to his advantage, as Claudius evaded the purges of both his uncle Tiberius’ and nephew Caligula’s reigns, the latter providing him with his first experience of public office, as co-consul in 37 AD. Although this decision by Caligula had political advantages, by further recalling the memory of the hugely popular Germanicus, Claudius was also likely kept alive to be the butt of his nephew’s practical jokes. Fortunately for Claudius, Caligula’s reign was cut short by his assassination, after which, the Praetorian Guard quickly proclaimed him Emperor to challenge the Senate, who were debating a change in government at the same time. As the only male of the Julio-Claudian dynasty left alive, the black sheep of the family, whose first position of public office was only four years prior, suddenly found himself the ruler of the Roman Empire.

Ancient historians tend to depict Claudius as absent-minded and dim-witted throughout his reign; Suetonius describing a particularly ridiculous figure who interrupted Senate meetings with digressive comments, whose judgment over legal cases were often ill-informed and ignorant of the law, and who passed pointless edicts, even considering passing one to encourage flatulence in public. However, this is contrasted with the effective administrator he proved to be, initiating a series of important infrastructural projects including two new aqueducts and a new harbour at Ostia, stabilising the grain supply for the winter. In addition, Claudius significantly expanded the Empire for the first time since the reign of Augustus. His most famous acquisition was Britannia in 43 AD, for which he was awarded a triumph and granted the title ‘Britannicus’. This conquest also made him into a living god, as a temple was dedicated to him in the new provincial capital of Camulodunum (modern-day Colchester).

The most persistent challenge Claudius faced throughout his reign came from the Senate, stemming from his ascension being forced upon them by the Praetorian Guard. In only the second year of his reign, a large rebellion was organised by the senator Lucius Annius Vinicius, and Lucius Scribonius, the governor of Dalmatia. Paranoid and insecure about the threat the Senate posed to him, Claudius resorted to the execution of 35 senators and 300 knights, cementing a cruel, despotic reputation amongst the nobility, which ancient historians have compounded with allegations of a sadistic addiction to gladiatorial and wild beast games.

Another stereotype associated with Claudius that has persisted to this day is that he was a weak ruler dominated by freedmen and his wives. Looking beyond the clear biases of the mostly senatorial historical accounts, however, there may have been political astuteness in Claudius’ decision to increase the role of freedmen in the administration of the Empire. Transferring responsibility over correspondence, the treasury, and the judiciary to within his own household and away from the nobility lessened his reliance upon senators, who, as we have already examined, threatened his security the most. Moreover, the evidence suggests that the freedmen were fiercely loyal to the Emperor, while the consistency of character in his policies throughout his reign attest to the supreme control he maintained.

However, Claudius’ last two wives provided considerable justification for accusations of weakness, as Valeria Messalina not only became notorious for her promiscuity but even bigamously married Gaius Silius in a public ceremony while her husband was in Ostia. His final and most controversial marriage was to his own niece, Agrippina the Younger, the daughter of his brother, Germanicus and the sister of Caligula. Although Suetonius ascribes this decision to Claudius being deceived by her opportunistic wiles, the marriage not only provided Claudius the additional legitimacy of being married to a great-granddaughter of Augustus, but also an adolescent male heir in her son, Lucius Domitius Ahenobarbus (Claudius’ only biological son, Britannicus, was still a boy at the time of their marriage).

Claudius’ death in 54 AD is most commonly attributed to poisoning by Agrippina, either administered through mushrooms or a poisoned feather, possibly in response to Claudius’ attempts to re-assert his own son, Britannicus as his heir. Although some modern historians have disputed this and argued that Claudius’ death was due to natural causes, the almost universal consensus from ancient writers is somewhat difficult to contest with. Agrippina’s sixteen-year old son Ahenobarbus would succeeded his great-uncle and step-father as the Emperor Nero.