“I think there’s something there that wasn’t there before…” 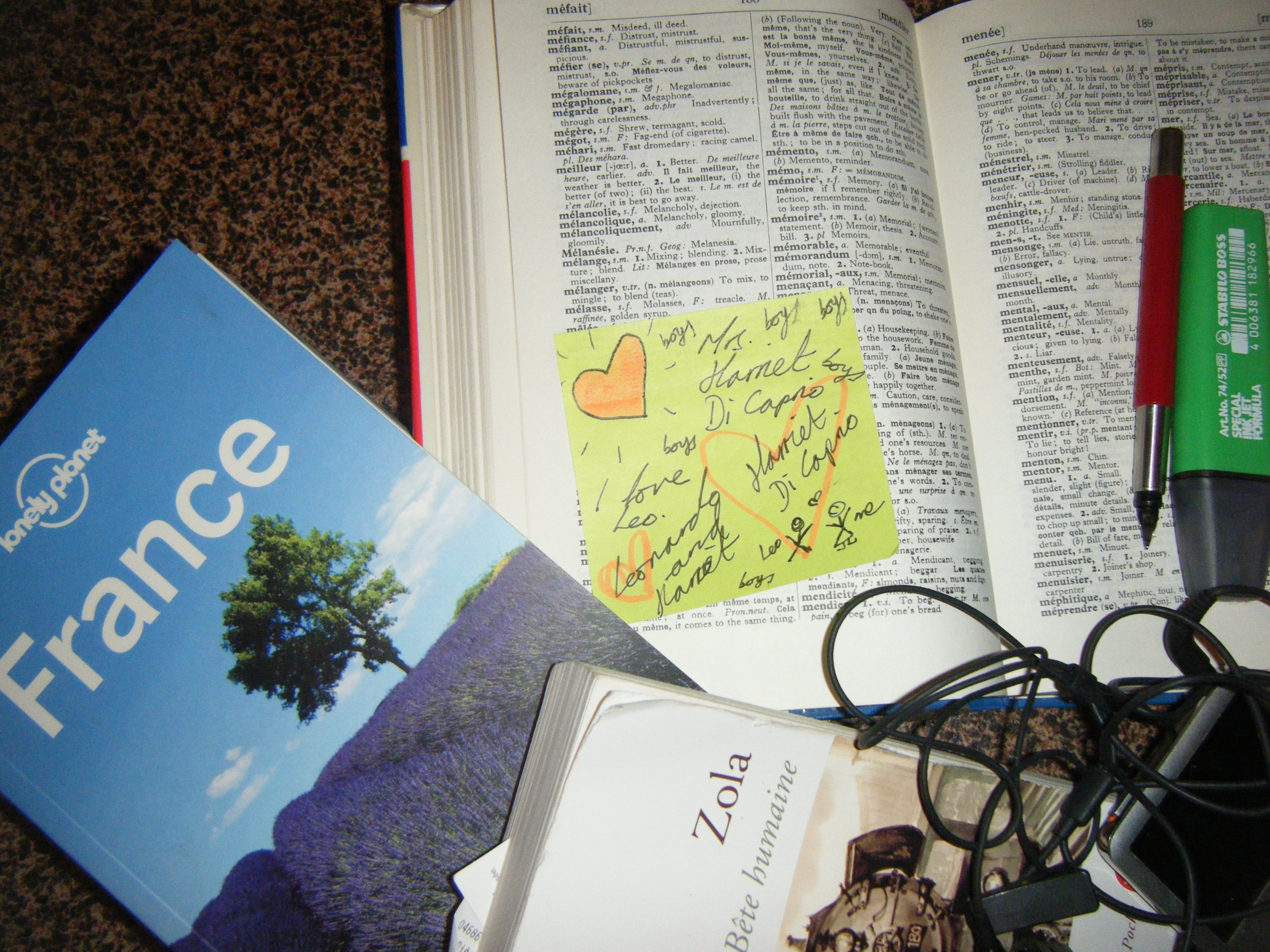 I like boys. There, I’ve said it. I think they’re bloody brilliant. I might even go so far as to say, I love boys. However, Harriet aged six thought very differently. It wasn’t that she objected to them, it was just that they were… Well, irrelevant. They were neither here nor there; which can also be said for my past attitude to French. It was just another subject slotted in between maths and P.E, only it included more singing. And so, in retrospection it has become apparent that I have come a long, long way in my opinion of both boys and French, so much so that I have now gone the whole hog and collated both concepts and now have a French boy of my own. My younger self would be, frankly, horrified. However, I believe there are many stages along this journey of discovery, and it is this which will be the subject of this article.

The Ignorance Stage: French lessons at school with Mme. Cooper aged six were merely an excuse to colour in, sing songs and learn about croissants. Although in my mind, French people didn’t really exist. I’d never left the British Isles at this point, so who’s to say we weren’t the only country around? Such ignorance can equally be applied to my view on garçons at the time – sure they looked a wee bit different in the swimming pool changing rooms but really, what was the big deal?

The Horror Stage: Fast-forward two years and you’ll find me eating almost every meal off a souvenir place-mat map of France; Normandy to be precise. Why? Because my parents, much to my chagrin, had decided that Normandy was the hot holiday destination of the moment and we had vacationed there two summers in a row. Other people went to Greek islands or the Costa del Sol. I went to Normandy. It wasn’t sunny, there was no one to make friends with and they all spoke a really silly language. There was an old lady who lived opposite the cottage where we stayed who simply just did not speak English. She horrified me; anyone who kept goats and refused to speak my language was clearly a philistine. Was it a coincidence that the French spelling of the region, ‘Normandie’ had the word ‘die’ in it? Furthermore the cottage was far from luxurious… A very suspicious smell lingered constantly, there were very few windows leaving the impression of a prison cell and worst of all there was a never-ending flow of flies around the house. The situation got so bad that Dad had to attach sticky fly papers to the very low ceilings to tackle the infestation, creating something of an obstacle course for my parents. These papers proved most affective at catching flies… And also my mother’s hair…

It was aged nine and a quarter that I made the decision that I, Harriet Mallinson, did not like boys. My next door neighbour, Andrew, with whom I had been friends for the past few years refused point blank to let me come to his birthday party on the basis of my having a front bottom and not a willy. What. A. Poo. From then onwards my friend Amy and I became openly hostile towards him and his cronies, and our battleground became the garden fence over which we would shout insults and throw sticks and stones. If anyone was to ask me who I hated most in the world my immediate answer would be, “Andrew”, without a moment’s hesitation. Boys: gross. No thank you.

The Discovery Stage: “French Kiss“. No… Not the style of kissing (which bizarrely enough I’m told did not in fact originate in France and about which I can safely say, after having done some research into this field, if you catch my drift, that it is pretty similar to English kissing …) but the film. Yes, the 1995 wonder starring Meg Ryan and Kevin Kline. I think I may say with absolute certainty that this film revolutionised my life. For some utterly extraordinary reason it was this chef d’oeuvre that made me truly realise that there was more to France than sitting in a classroom wrestling with the subjunctive tense. It’s not even that I find Kevin Kline that attractive – anyone who knows me well can vouch for the fact that moustaches for me are a BIG no-no (even though my moustachioed father frequently likes to remind me with a twinkle in his eye, that “all the great men in history have had moustaches: Hitler, Stalin, Saddam Hussein…”). The film just possessed a certain je ne sais quoi that really persuaded me that France, with its vineyards and cheese was actually pretty good.

At the tender age of 11 I began my secondary education in a single sex Catholic boarding school. One of my earliest memories of the year seven common room was Rosie Glaister telling us all about her boyfriend; “a boyfriend?” I said to myself, “what a strange concept indeed”. In fact all the cool kids knew a surplus of boys whilst I could still count my male acquaintances on one hand, none of which were remotely interested in me beyond friendship. But the more I heard about Rosie’s numerous conquests the more the thought trickled into my head that perhaps the other sex did in fact have a certain appeal. My diary entries (upon re-reading) certainly suggest this, with “I heart Leonardo Di Caprio” or “Antonio Banderas is so dreamy” scrawled all over many of the pages. However, the problem with going to an all-girls school meant that boys were such a rarity that every time I met one I decided I simply must fancy him. So if you’re a boy out there whom I met between the ages of 13 and 17… I probably fancied you at some stage. In fact scrap that, I definitely fancied you.

The Acceptance and Embracing Stage: And so, here we are; now I live in the country I previously so hated and boys… Well they now happily invite me to their birthday parties, look at it that way! Needless to say, on my list of places I want to visit in France during the course of this year abroad, Normandy is not given a look in edgeways. Oh no. And in case you’re interested, Andrew and I never did recover from the blow of 1999. Our friendship was irreversibly severed. I’m told he now has a girlfriend, so clearly, like me, he’s realised that the other sex really aren’t so bad after all…