Donnchadh O’Conaill in Columns on 1 November, 2010. 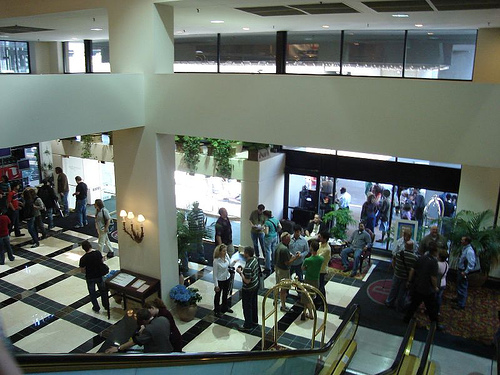 A hotel can be the site of strange happenings

The clock sounded different. That was the first thing she noticed, before she even opened her eyes.

A vase with flowers on the bedside table, behind the clock. She leaned in close, smelled them, touched them. They hadn’t been there.

She blinked, several times. Looked around the room. Looked back. The flowers were still there. She touched them. As real as they had been before.

Looking around the room… Muslin curtains sighing in the breeze, cream and chocolate wallpaper, a portrait of a dead patron’s dead wife coolly observing the towel thrown over the back of the chair. None of it had been in the room she had gone to sleep in.

The staff were more polite than she remembered. The receptionist showed her the record of her reservation without question. The manager gave her a sepia smile, words of reassurance, his elbow to walk her to his office. Offered her tea. Listened, prompted her as she pieced together where she had been before midnight. Had no explanation. Apologised on behalf of the staff, but no-one could actually remember seeing her yesterday. It is a very busy time of year. The hotel didn’t have an official policy for such cases, but we can come up with a contingency plan.

That evening she sat in the lobby sipping at a glass of tequila, dialling numbers from her phone book. The names were the same, but none of the people were. “Mum” was a mother, but not hers. “Dad” wasn’t a father, but his partner was expecting, and he thanked her for her kind wishes. “Dave” was an accountant, but in the wrong firm; “Delphine” appeared to speak no English; “Louise” mistook her for someone else, someone with whom she apparently had such a complicated relationship that the best option was to hang up mid-sentence.

At “Tanya”, she let the call ring out. Tanya had had voicemail.

The manager had offered her extra nights, free, to let her gather herself. She lay on the bedsheets, her suitcases in a semi-circle around her, thinking whether to unpack them.