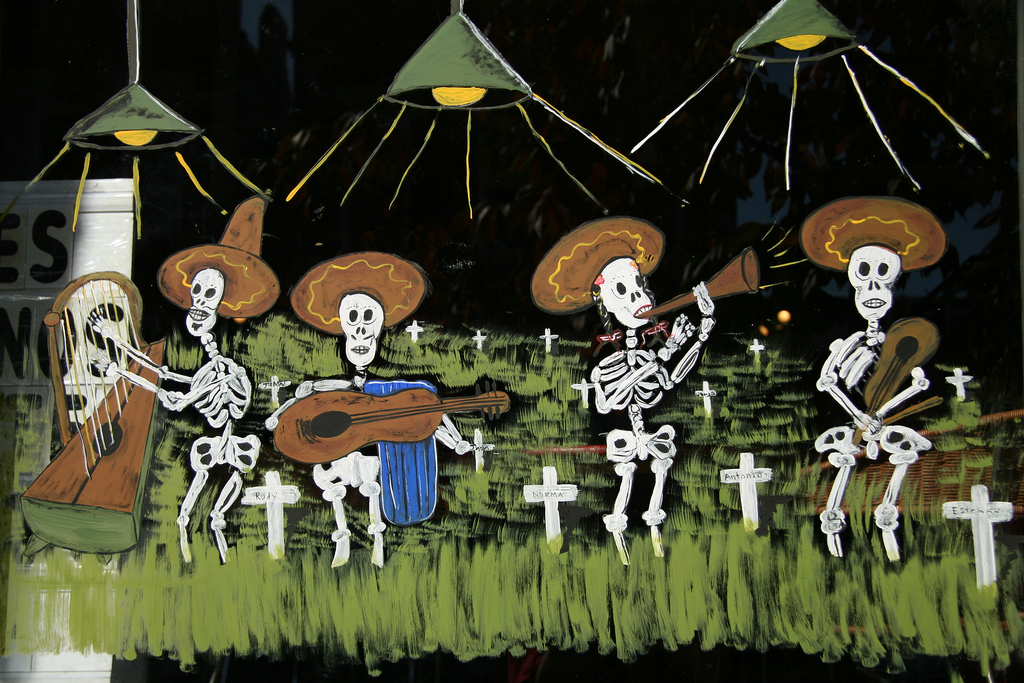 This past November the cult of death was celebrated throughout Mexico in the Día de Muertos (the Day of the Dead). At first glance there may be many similarities to Halloween, yet in Mexico this is one of the most vibrant times of the year where we remember our ancestors with food, fiestas and traditional celebrations. In typical Halloween celebrations, death is perhaps something to be feared and money is to be made; on the Dia de Muertos, death – or at least the memory of the dead – is something to be celebrated and enjoyed.

This ancient celebration was passed on from the pre-Hispanic Mexican civilizations of the Mayans, the Aztecs and the Teotihuacans who celebrated the honour of death, in sacrifice to the gods and valiant death in battle. Indeed, the Aztecs often kept skulls as trophies and displayed them during their rituals to represent death and rebirth of the soul. Souls could pass to a myriad of underworlds depending upon the manner of their earthly demise: Tlalocan for those who had drowned, the God of water being Tlaloc. The paradise of Omeyocan was dedicated to Huitzilopochtli, a sun paradise, home to lost warriors or women who had died giving birth. However, the most common resting place for the dead is Mictlan, the home of those who passed away due to natural causes. The latter was governed by Mictlantecutli, the Lord of Death: often depicted as a blood spattered skeleton with a necklace of human eyes and ear spools of human bones, his skeletal jaw lies open to receive the stars.

The modern Día de Muertos celebrates the dead and their passing from this life to the next. On November the 1st the souls of the dead may return to the realm of mortal beings for one night to share their love with those whom they left behind. We leave an “Ofrenda” or an offering for those who have departed to give them sustenance on their long journey from the netherworld. This consists of a colourful altar with water to purify, candles to light their way back and cempaxúchitl flowers, Náhuatl for twenty flowers, or marigolds in English. These flowers of the dead are said to attract the souls of departed to the ofrendas. Of course, included in the offering is the food that the deceased once loved including tequila, pan de muertos (the bread of the dead), cigars, candies and all manner of tasty things. In towns such as Mizquic, Pátzcuaro and Janitzio people spend the whole night by the graves of loved ones, eating picnics and reminiscing of good times past. The most important thing is to celebrate our lost loved ones in a loving and colourful way. Death here is celebrated and the day has the feeling of a huge party.

After the colonization of Mexico by the Spanish, Catholicism became the dominant religion and the once month long Aztec celebration became intertwined with All Saints Day of November 1st. Today, we honour the passing of departed loved ones with sugar skull gifts symbolizing people “eating their own death”. In some states of Mexico mariachis play outside of cemeteries and in others mystical music can be heard in ceremonies as rituals of prayer and dance bring a spiritual communion between life and death.

Recent developments have seen young people, particularly in the cities, roaming the streets dressed in costumes asking for calaveritas, either small candies or money similar to trick or treating carried out on Halloween in the USA and Britain; Halloween being the celebration of the ancient druids who on the day of Saman, the Lord of Death called together the souls of the wicked whom had died in the previous year. Perhaps this has been long forgotten now in the minds of the many.

The Day of the Dead rejects the mournful commemoration of dying and celebrates a happy and colourful celebration where death takes a lively, friendly and loving expression. It is time for a reflection on life and our mission here on this earthly plain. Let us not fear ghosts and ghouls, the representations of our own fear of death and the feeling of pain and loss which looms large over our lives. Rather, by embracing death as an opportunity for resurrection, transcendence and transformation we can learn more about life, and truly appreciate it with all of the colour and passion expressed on this day, the Día de Muertos.