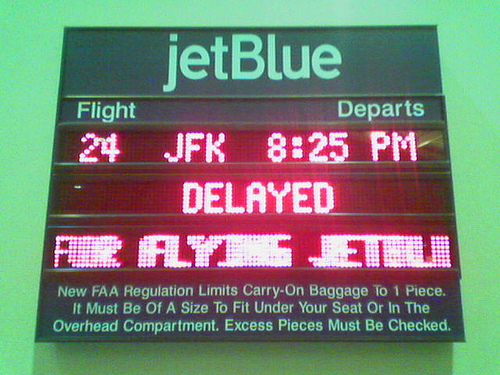 Thousands of people were victims of flight chaos

So I’m back in the land of berets, Asterix, and wine-swilling Casanovas after a two week holiday en Angleterre. I had a rather perfect two weeks, leaving me feeling emotional when it came to coming back. With the recent snow problems infiltrating many airports and causing great annoyance I was pretty nervous I wouldn’t be able to fly home for Christmas. Now, this would have precipitated immense heartbreak and enough tears to fill the ocean as I was desperate to get back to good old Shottingham. After four months of 9 to 5, a lack of everything I love that is English and the tiniest bed in the world, I was dying for a bar of Dairy Milk, my huge, glorious bed and a hug from my mummy.

However I didn’t have the smoothest journey home. After waking up at stupid o’clock in the morning and ringing all the taxi numbers I could find, I had to walk to the train station, snow and ice carpeting the ground and 23.5kg suitcase in tow. This may not sound like the hugest travesty one could encounter but my arms happen to be rather weak so they did not enjoy lugging my humongous suitcase and laptop-containing handbag. Indeed the 20–30 minute trip took one hour. After the initial five minutes where the Lord deceived me into thinking the walk would be a piece of cake, the immense pain in my arms kicked in. I was very close to giving up when, England in sight, a stroke of genius hit me… push it like a buggy! So yes, I must have looked rather amusing to any passer-by (thankfully few at 4 in the morning) but it was a genius idea as I actually made it to the station on time – hallelujah.

Now my (slightly) traumatic journey did not end there. I used to love airports, bizarre as it sounds. As a child my parents would take me to East Midlands for a day trip, back in the day when it was possible to watch all the planes take off; little me just couldn’t get enough of it. Indeed one of my favourite parts of Love Actually is the beginning in the airport when you see people reunited after trips, hugging, crying and feeling evidently happy to be back with loved ones. Alors, after a few rather horrendous trips back to England I. Detest. Airports. Unfortunately my year abroad has ended my love affair with the once wondrous origin of holiday revelries. This time I had issues with the luggage allowance. At check-in the lady told me that my suitcase was 5.5 kg heavier than the baggage allowance and therefore I was going to have to pay 80 euros. She surely was having a laugh. She was not. So I hastily proceeded to open my suitcase and shove all the heavy items into my handbag; quite a challenge when your handbag has a laptop in it. I managed to get it down to 19kg and thankfully she didn’t make me pay.

After this palaver only 15 minutes remained until take-off so I traipsed off to the gate, trying to ignore the new weight of my handbag and praying to God the straps did not break, to discover the plane was delayed. So I went on a quest to find breakfast (a nutritious meal of M&Ms was all that was on offer), went to board and then we were kept on the shuttle bus transporting us to the airplane for over an hour. Standing with my beast of a bag and therefore back ache to add to my wounded arms, I was not so pleased. Yet, at the risk of sounding like a moaning Minnie, I will just say that thank God my flight was not cancelled (I know many of you will have suffered worse journeys than mine; I just suffer from a slight drama queen tendency) and after a not so huge delay we were in the air.

Finally I touched down at East Midlands, concurrently with the Perpignon rugby team (hello) and walked through to arrivals. And I got my Love Actually airport moment. There really is nothing like seeing your parents waiting for you, tears streaming down my mum’s face (of joy, I assure you), a huge smile on my dad’s (I reckon I saw a cheeky tear), and I knew that Christmas was going to be perfect. However I shall leave what I did up to your imagination – my time at home simply cannot hog my year abroad column.

My journey back to France was not quite so melodramatic so I won’t bore you with its details. However a rather humorous event did occur as I arrived in Amiens. I had been waiting for a taxi for around 20 minutes (there was no chance I was risking the walk and arm paralysis) and was now at the front of the queue when a transvestite turned up. He looked ravishing in glittery leggings, a leather skirt, and glittery make-up (exactly how girls dress) and began to shout away, declaring he was going to get a taxi for all of us. Erm, no, thank you. However, when the taxi showed up he ran over and jumped in it, which the family behind me found outrageous, shouting “get out, that’s not cool, she (vulnerable moi) has been waiting for half an hour…” Crikey, it was getting heated. The taxi driver threw out the transvestite, took my suitcase and opened the door for me! So I got a ride back to my palace/tiny room with a perimeter of 9 metres, with a driver who was suffering from a rather large fit of giggles at the sight of a transvestite. I have to say this little episode did wonders for my emotional state, and as I arrived in my little room, I thought “hellooo France”.